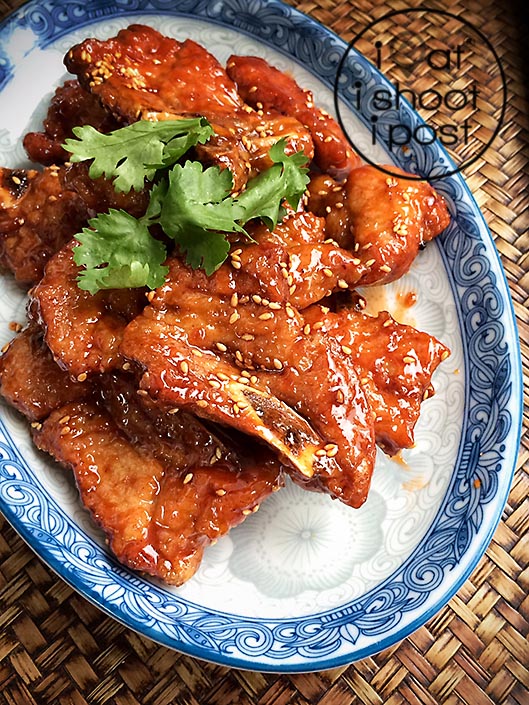 When I was a kid, 京都排骨 (jing du pai gu – lit Kyoto pork ribs) or 排骨王 (pai gu wang – lit pork rib king) was my all time favourite dish. I used to always look forward to eating it whenever our family went out for dinner at the Chinese restaurant.

According to Chef Chris Hooi of Dragon Phoenix restaurant, this dish was created by his father, Chef Hooi Kok Wai in 1962 as part of the menu for his new restaurant.  It was introduced to Singaporeans when Dragon Phoenix restaurant was opened in 1963. At the time, it was called 日本排骨 ri ben pai gu  or Japanese Pork Ribs as it was inspired by the Japanese Tonkatsu.   However, the name was later changed to Kyoto pork ribs when one of Chef Hooi’s customers suggested that when translated to English, Kyoto pork ribs would sound better than Japanese Pork Ribs.  And so the name was changed to Kyoto pork ribs.  It is also commonly known as 排骨王 (pork rib king).

For the sake of clarification, there is also a dish called Kyoto pork ribs which originated in China.  It is made from prime ribs in a traditional “烧汁” sauce.  Chef Hooi’s version is different in that he uses pork loin instead of prime ribs.  There is also the sprinkling of sesame seeds which is also associated with Tonkatsu.  The sauce is also different as it uses HP or A1 sauce reflecting the British colonial influence in Singapore at the time.

As with most dishes in Singapore, our short history means that most of the dishes created here are really modifications of dishes from Chinese, Malay, Indian and British origins.  There really is nothing new under the sun.  Even the Japanese Tonkatsu was derived from the Portugese.  But when you talk about Tonkatsu, no one will doubt that it is a Japanese dish.  It’s the same for our beloved 排骨王 which is one of our favourite Cze Char dishes. 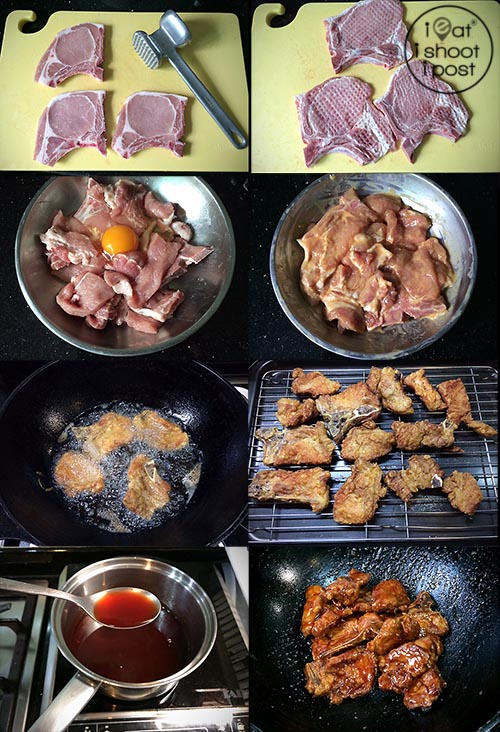 1.  The cut of meat used is the pork chop which includes the loin (the round lean bit) which is still attached to the rib and back bone.  This is the reason why it is called 排骨王 (pork rib king), so you really should not use any other cuts for this dish. If you wish, you may buy boneless pork loin to make the dish.

2.  The meat should be tender and bouncy.  This is achieved by pounding the meat first with a meat tenderizer and then marinating it with bicarbonate of soda. This is the traditional way of doing it.  When using bicarb, just make sure you don’t use too much and you don’t marinade for too long or else it will become tasteless and lose the meaty texture.  Around half and hour to an hour is ideal.

3.  If you are using frozen meat, make sure you defrost it in the fridge slowly, preferably overnight.  If you try to thaw it in water or in a microwave, the muscle cells will be damaged and you will end up with dry meat.  This is particularly important with the loin as it is very lean with little marbling.  You may not be able to find pork chops cut in this manner at the wet markets as they tend to remove the loin from the prime ribs.  You can find this type of cut at the frozen section of the supermarket as pork chops is more popular in Western cuisines.  They are usually sliced with a machine at 1 cm thick which is the right thickness for this dish.

4.  One extra step you might want to take to make the meat more juicy is to brine the meat after it has thawed.  Make the brine using 300ml of water and 15g salt.  Cover the pork and leave in the fridge for 8 hours and you will have nice and juicy meat when its cooked.  You will need to omit the salt in the final marinade.

5.  Custard Powder is used in the traditional recipe to add extra flavour and colour to the fried pork.  It is a common ingredient used by the four heavenly chefs in deep frying.  You may replace it with corn flour.

6.  Sugar is an important ingredient in this dish as it is essentially a sweet dish.  The tang is almost undetectable and serves to brighten the dish with a bit of zest.  So make sure you use a good quality brown sugar.  Traditionally, they like to use sheet sugar which is brown sugar that has been cut into rectangular blocks.  You can find these at the supermarket.  Sugar is always nicer when it is a little caramelized.  So when cooking the sauce, make sure you really let it bubble and swirl in the wok to caramelize the sugars.

7.  I have always remembered Jing Du Pai Gu to have a wonderful floral aroma when it was served.  To do this I came up with a final step in the cooking process.  Once the pork and the sauce has been incorporated and almost ready to serve.  Turn up the heat in the wok and add 2 Tbsp of good quality Rose Wine, tilt the wok to allow the alcohol to catch fire.  It adds that nice floral aroma to the dish as well as caramelizing some of the sugars on the surface of the meat.

Pound the pork chops with meat tenderizer and cut into 5cm by 3cm pieces.  Add all the ingredients in A1 and massage into pork.  Then add the ingredients in A2 and mix well.  Leave for half to 1 hour but not more than 2 hours. (If you leave out the bicarb of soda you can marinade overnight)

Heat 1 inch oil in a pan or flat bottom wok.  When the oil is very hot (180°C) add the pork and fry till it is golden brown (approx 2 min). Make sure you fry in small batches.  Set aside on rack or dry with paper towel.

Mix all the ingredients for the sauce in a bowl.

Pour off the oil from wok.   Add the sauce and cook until it is thickened and some of the sugars have caramelized.  Add the pork and toss to coat evenly.

Once it is well coated, add 2 Tbsp Rose Wine and tilt the wok so that the sauce catches fire from the flame.  Allow the alcohol to burn off.  Sprinkle with sesame seeds and serve.

Disclosure: Some links above are affiliate links, meaning, at no additional cost to you, a small commission is earned if you click through and make a purchase. 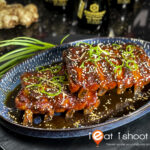 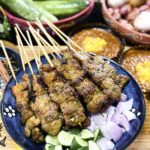 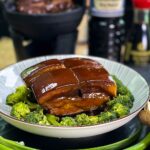 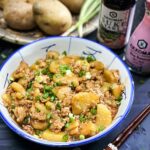 Glad you liked the recipe! Thanks for writing in to let me know!

Hi Leslie, thanks for the recipe! Comes in handy when one is living overseas. Would you be able to provide a substitute for potato starch? Thanks in advance!

You can use corn starch.

Hi there. Any pictures of Rose wine? I live overseas they keep referring me to rosé wine. Same?

Look for the words “Mei Kuei Lu” on the bottle at Chinese supermarkets. https://www.google.com.sg/search?q=Rose+wine&rlz=1C1UXZO_enSG713SG713&espv=2&source=lnms&tbm=isch&sa=X&ved=0ahUKEwi61ZuZluTSAhUJso8KHZ6XAgoQ_AUIBigB&biw=1396&bih=756#tbm=isch&q=Rose+wine+chinese+cooking&*&imgrc=cnRqwgfaXCFCTM:

Hi I just tried your char siew and it was so awesome. Really want to try this. If I cut the bone in pork chops into 5x3cm pieces, does it mean I have to cut the bone too? Thanks!

Doesn’t really matter. Just make sure the thickness is about 1cm. You can even use pork loin without bone.

Thank you for sharing your recipe.
Please advise after I brine the meat, Do I have to rinse the meat before marinating it?

Yes, I would just rinse and pat dry.

Thanks Leslie for sharing the recipe and tips. It was a success. My family enjoyed very much.

Thanks Elaine, always a pleasure.

Hi. If I want to brine the meat, would do the brine before the Pork Marinate with the ingredients list in A1?

Yes, that is right. 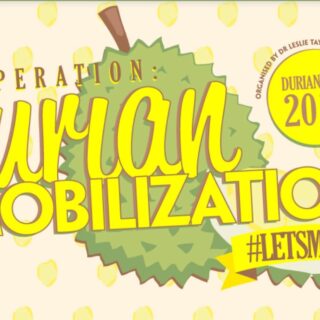 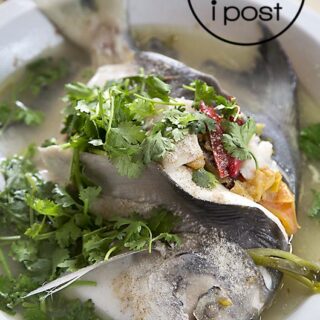