Uni is like durian.  You either find yourself on cloud nine when you first taste it or start gagging and vow never to touch the stuff again!

Fortunately, I belong to the cloud niners.

For those of you who have yet to experience uni, the most important tip I can give you is this:  Good uni tastes like heaven, bad uni, like week old swill.  So, unless you are a gustatory masochist, make sure you get your first taste of uni at a reputable Japanese sushi bar.  It’s really not worth gagging over bad uni, no matter what price you pay for it!

My love affair with uni started in 2009 when I first tasted it at Nogawa.  Since then, I have been compiling information about the different seafood used in sushi in my Sushi Files, but I have not been able to write much about uni because of the lack of information.  Now, with the help from Jason Ong of Uni Gallery, I will fill you in on what you need to know a so that you would be able to impress others with knowledge that uni you know! (roll eyes, face palm, sigh)

Firstly uni is what the Japanese call the gonads of the sea urchin.  Yes, you heard right.  They are the reproductive organs of the creature. No, they are not the roe or the milt, they are the organs that produce the roe and the milt.  What amazes me is just how prominent these organs are!  When you break open a sea urchin, all you see are the five lobes with a bits of innards covering them.  It is as if the creature does nothing else but eats and reproduces!  For fans of the original Star Trek series, you might agree with me that they look and behave just like a spiky version of the “tribbles”.

There are,  broadly speaking,  two types of uni that are frequently referred to in Japan, viz, bafun (hemicentrotus pulcherrimus) and murasaki (anthocidaris crassispina) uni.  These names refer to the actual sea urchin themselves and not the sushi topping.

“Bafun” uni are the ones with short spines which the Japanese think resembles horse poop, hence the name, bafun 馬糞.  Ezo bafun uni (strongylocentrotus intermedius) are widely considered the best, especially those that come from the region around the islands of Rishiri and Rebun, in Northern Hokkaido.  The best konbu in Japan are harvested from the frigid waters surrounding the islands and since sea urchins feed on konbu, the uni harvested there are especially tasty!

Ezo bafun uni is bright orange in colour,  naturally sweet, and tastes like a bright ocean breeze captured in a slice of foie gras. Its flavour also tends to linger longer at the back of the palate than other uni. 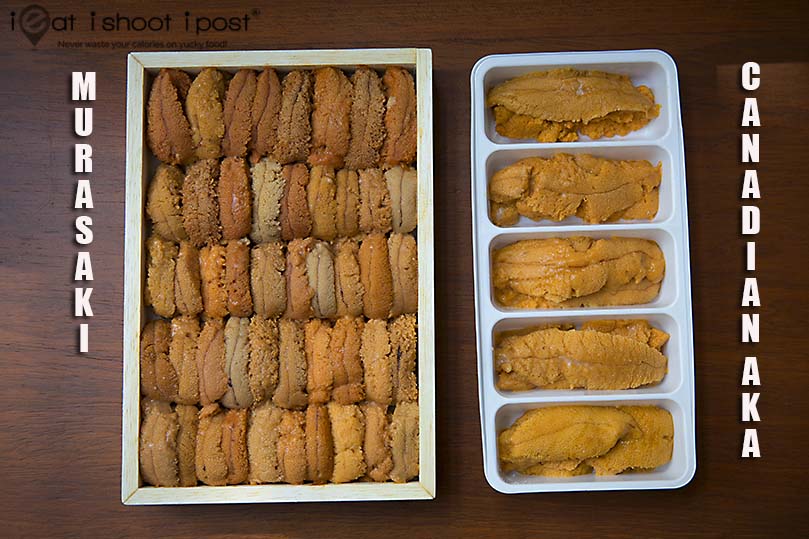 Murasaki uni is the one with long menacing spikes which we all recognize as the typical sea urchin.  It is named “murasaki” because of the dark purplish colour of its outer shell.  In general, the gonads are paler in colour than bafun uni.  It is creamier but the flavour is less intense than bafun uni.

Bafun uni is preferred over the murazaki uni most of the time, UNLESS they are the top quality ones known as shiro uni.  These are large and pale yellow taels of gold which can cost 10 times more than the normal uni!   The price for a serving of bafun uni  is $30 at Uni Gallery whereas those of the Hodate Special Edition (shiro uni) is $290!!  You might be wondering how this super exclusive uni tastes?  Well, even Jason doesn’t know, as it is so expensive, he hasn’t even tasted it himself!  But, if you have some spare cash to burn, they can import a box for you to try!

So far so good, right?  We’ve covered bafun and murasaki uni.  It starts getting confusing as the Japanese also classify uni according to its colour, in which case you have aka, ie red uni and the aforementioned,  shiro, ie white uni.  In general bafun uni is classified as aka uni but both can also be shiro uni depending on its colour and size.

To add to the confusion, the red sea urchin (strongylocentrotus franciscanus) harvested in Canada and the US West Coast is also known as aka uni. In this case, the “aka” refers to the colour of its shell rather than its gonads.  The ones from British Columbia are marketed as Canadian aka uni.  These are cheaper than Japanese uni and are large and creamy although the flavour is less intense than bafun uni.   Because it is cheaper than Japanese uni, they are able to sell a bowl of uni don topped with Canadian aka uni for just $28.90 during lunch, which is comparable to the price of a uni don in Hakodate. 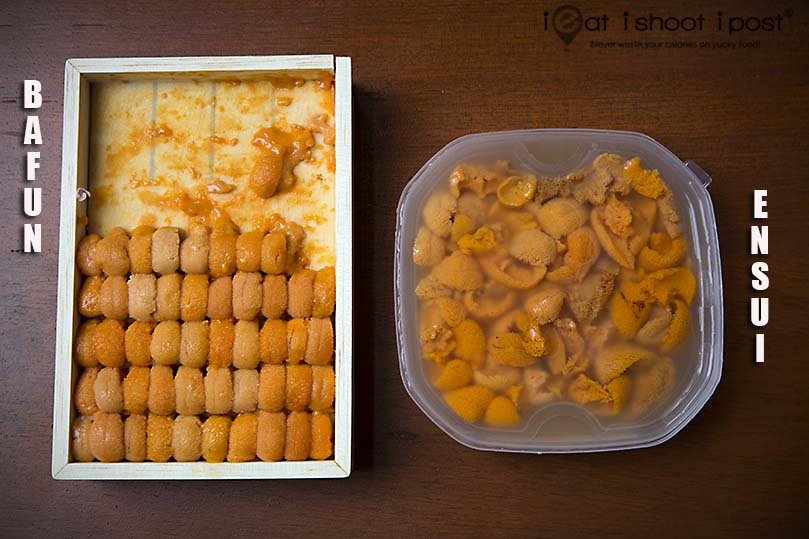 Uni is also classified into box uni or “ensui” uni which is uni preserved in salt water.  In general, ensui uni tastes better than the box version as they are not preserved in alum.  Alum is needed to keep the uni from deteriorating and turning into mush too quickly.  Suppliers of box uni will always boast about the amount of alum used in their offering. The lesser being the better, of course.   Sushi chefs would use ensui uni for appetizers and side dishes, but for sushi, they prefer the boxed version because of its better presentation.

Aside from fresh uni, Uni Gallery also serves other uni products like the uni shutou which is served as a topping for wagyu beef in their “uni bomb”.  Uni shutou is basically a bottled uni paste made from uni mixed with kelp flavoured soy sauce.  It is actually a product from Santa Barbara, California.  The flavour is quite intense and the salty, umami condiment goes very well with the wagyu. 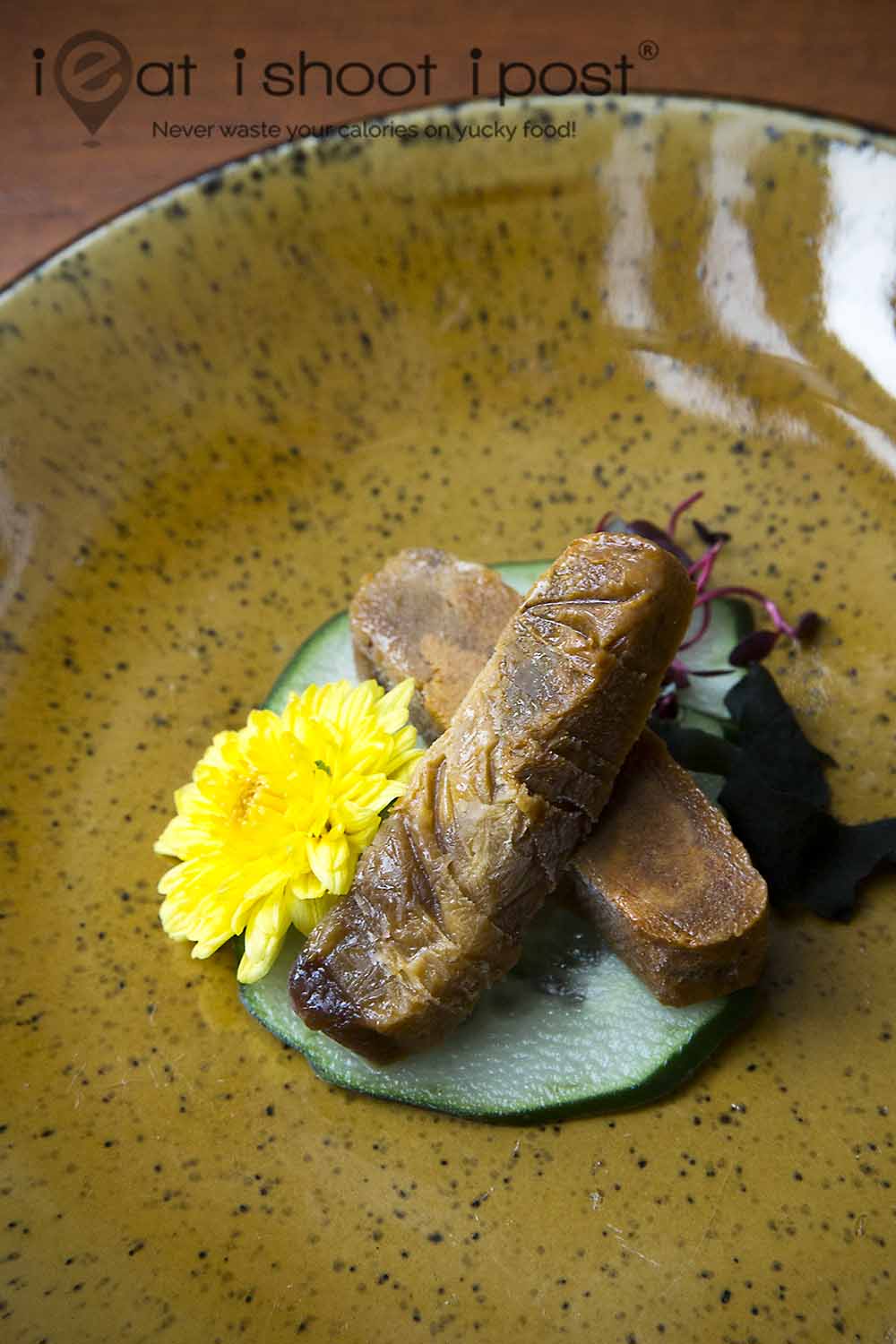 Another uni product that is served at the restaurant is Uni Shutou Ruibe which is uni that is preserved between soy sauce marinated kelp.  “Ruibe” is basically half frozen sashimi and was the method employed by the indigenous Ainu people of Hokkaido to preserve  fish caught during winter. (They simply bury it in the snow!)  It is eaten frozen and will literally “melt in your mouth”.  The flavour is quite intense and goes well with sake. 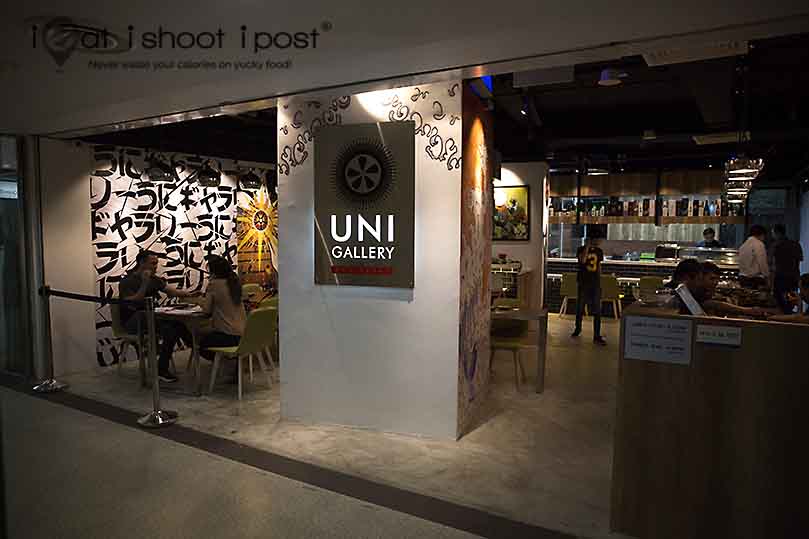 Located at the basement of The Plaza, the restaurant itself is modern and casual.  Although they specialize in uni, they do serve sashimi, sushi and other Japanese dishes.  It wasn’t quite what I expected of a place that sells such a high end ingredient but Jason tells me it is delibrately done to make uni more accessible to the mass market.  Having said that, uni is still expensive stuff and if you are doing a sampling, expect to pay for it, though not as much as you would at a high end Japanese dining place.   The lunch time specials like the uni chirashi don $28.90 and ikura uni don $34.80 are excellent value and well worth a trip to satisfy that uni craving!

Disclosure
This was a media tasting.  That means that the food was provided without any obligations to write a review. 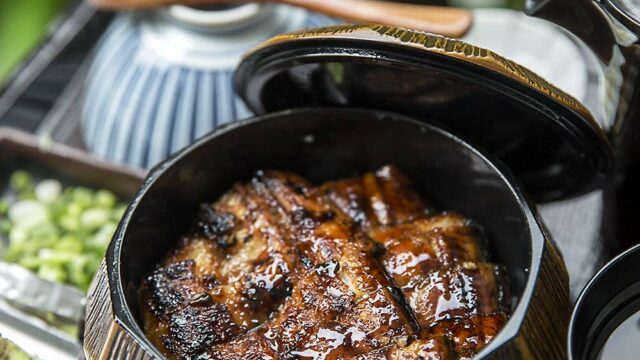 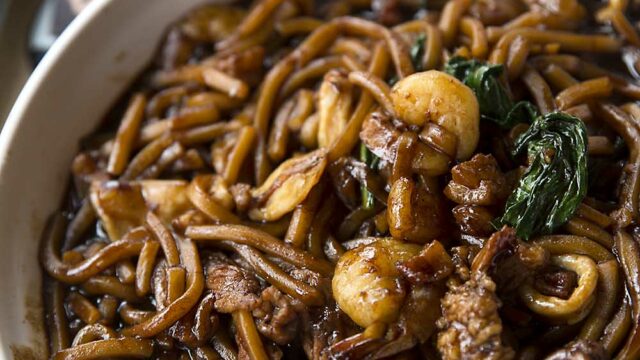