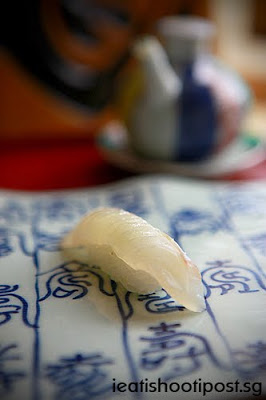 Following my Sushi Enlightenment with Chef Nogawa, I have now set out on a mission to post a photo catalog of the various Sushi that are available. In these posts, I shall not be using my usual numeric grading system because it really is about whether I like a certain type of sushi and whether I would order it again. Joining me are Cactuskit and Toothfairy, both of whom have also decided to embark on the journey of Sushi Enlightenment with me.

To enjoy Sushi, you really do need to sit at the counter so that you can interact with the itamae (Sushi Chef). For us beginners, it is a good way to learn more about the sushi that you are eating and it helps that Chef Kevin is unlikely to blurt out some expletive in Japanese if you ask too many questions. (He might scold you in Hokkien though)

First up is the Hirame (flounder). Hirame refers to any flatfish which includes Halibut, Fluke and Flounder. The flesh is light with a sweet and subtle flavour. This is to be eaten with salt and not dipped into soy sauce so that you can appreciate the flavour. 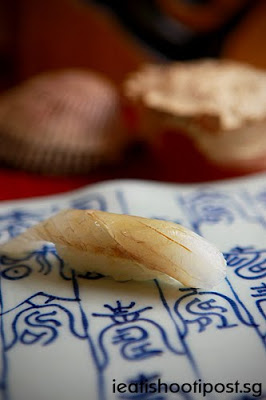 Suzuki is a particular breed of Japanese Sea Bass which is not to be confused with our local sea bass (Kim Bak Lor). The interesting thing about this fish is that it is born male and metamorphosizes into a female at the age of two or three. The flesh is light and subtle and served with a dash of shoyu (soy sauce). It will take me a bit more time to learn how to recognize the taste of this fish as the taste is really similar to a lot of white fish like the Hirame above. 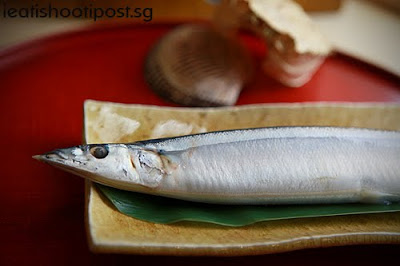 Sanma (Pacific Saury) is in season around the Autumn period which is why the Chinese name for it is 秋刀魚 which means “Autumn Knife Fish”. This fish is not commonly used for Sushi and is more commonly eaten cooked. It is one of those oily fish with a taste that is similar to Saba (Spanish Mackeral) but not as strong. It is served with grated ginger and chopped shallots.

Verdict: I don’t like the strong fishy taste, so I won’t be ordering this again. 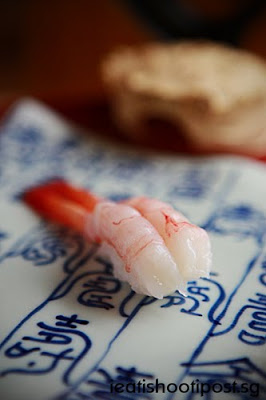 There are two types of shrimps that are commonly served in Sushi bars. The first is the cooked shrimp or Ebi and sweet shrimp which is Ama-Ebi. Raw shrimps are usually grey in colour so I guess they are not very attractive when served raw. The Amaebi is a very attractive red colour and is delightfully sweet and slightly sticky on the palate. I think this was the very first sushi item that piqued my interest in sushi.

Verdict: Love it! Standard item on my sushi list. 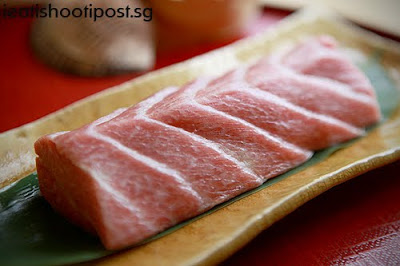 Otoro – the layers of flesh with fascia in between is characteristic

The King of the sushi fishes is the Blue Fin Tuna and the most prized bit is the Tuna Belly which is known as Otoro. There was some confusion over Otoro in my last post on sashimi and I am glad that now it is all cleared up. In that post, I asked if the Otoro was supposed to have that layers of intermuscular fascia. Chef Kevin quickly and definitively answered that question by showing me a book on sushi where the different cuts of Toro are displayed side by side. The difference between the Otoro and the Chutoro (less fat and cheaper) is that the Otoro is characterized by layers of flesh that is separated by white fascia.

When I asked Chef Nogawa the previous time the favourite fish of SM Lee, he replied without hesitation that it was Otoro although nowadays he does not take it because of its high fat content. Unfortunately, due to the popularity of Otoro, prices are skyrocketing and the fish stocks are being depleted. The most expensive fish ever sold was a Blue Fin Tuna which fetched $176,000 at the Tsukiji market in 2001!

Verdict: This is like Wagyu beef, the only thing holding me back is that each piece is $12 upwards. 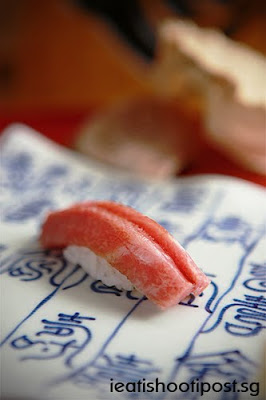 Rockett Girl finds Otoro a bit too fatty and prefers Chutoro instead. Chutoro is the part between the Otoro and the Akamai (lean meat). Depending on the cut, sometimes you might even get a piece that is considered to be O-Chutoro which is the less fatty portion of the Otoro but not quite the Chutoro. 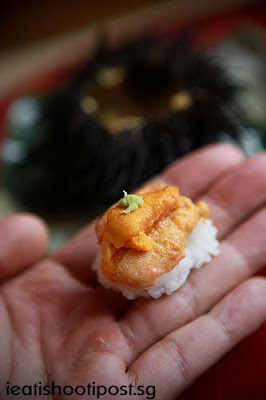 Some say that Uni (Sea Urchin) is an acquired taste. Well, I acquired it the first time I tried it and so did Cactuskit. If you like stuff like Foie Gras, you will probably like Uni. The taste is creamy and very savoury and I especially like it when it is ice cold.

It is a common misconception that Uni is the roe of the Sea Urchin. It is actually the gonads which produce either the milt or the roe but it is not the roe itself. (Ee-ewe I hear you say) Inside of each Uni are five lobes of these gonads which resemble a starfish. Uni is one of the more expensive items and each serving can cost $12 upwards. It is usually placed directly on your hand and you have to just put it straight into your mouth because it gets messy when you try to pick it up. 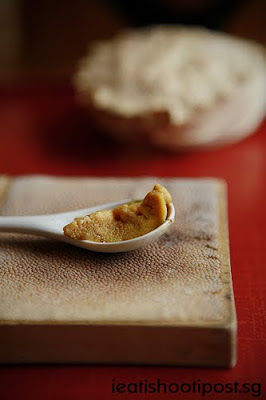 Uni from the shell

There are the specially packed Uni and there are also those which are taken fresh from the shell itself. Needless to say, the ones in the shell are most prized. We got to try both that day and quite honestly I think I have to taste a few more to learn to discern the difference. 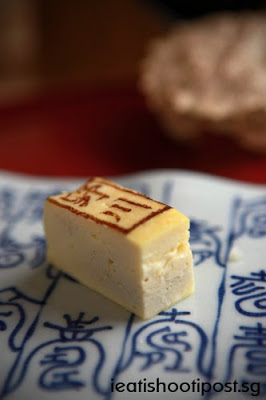 Some might consider the Tamagoyaki (Rolled Omelette) something for the kids, but this is a very important part of the Sushi experience because you can tell a lot about the skills of the chef by just looking at the Tamagoyaki. A good Tamagoyaki must be bright yellow without any brown and the layers must be even and stacked properly so there is no air in between. The texture must be spongy and light and of course the taste must be a nice balance between the savoury Dashi (bonito stock) and the sweet Mirin and sugar.

Verdict: Always, as it is a nice palate cleanser and you get to judge the Chef’s skills 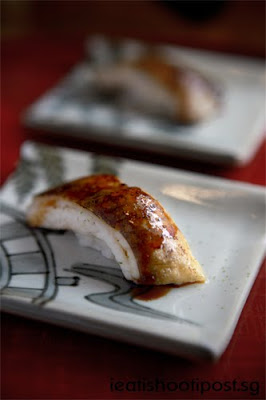 Anago another of those items which you can judge the Chef’s cooking skills. Anago usually refers to the Conga Eel which is a Sea Eel that is not to be mistaken with Unagi which is a fresh water eel. The beauty of this particular fish is that when it is done right, the flesh is soft and creamy.

Verdict: I like it but if I can forgo it for some of the other die die must try items. 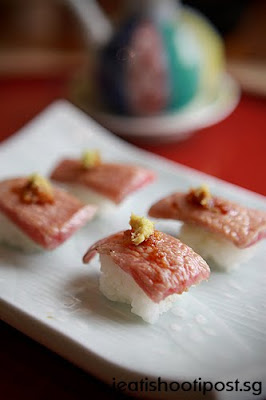 I rather enjoy the Aburi (flame grilled) items like the Aburi Otoro. In fact, the afficianados might slam me for saying that I actually like my Otoro slightly flamed such that some of the fats have melted. I guess it is the same with how I like my beef charred.

Verdict: Definitely on the menu. 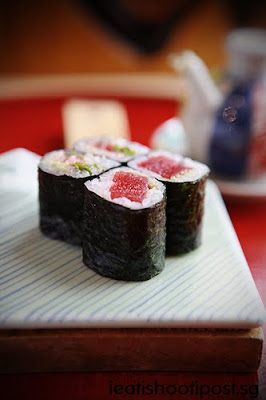 The last few dishes are more like fillers as it is the end of the meal and some people might still fell like walking across the street to have a bowl of Bak Chor Mee. Well, Sushi can be like that. It is not the kind of stuff you would look forward to eating after a 20km march. So after they have served all the best stuff, it is time to eat some maki (sushi rolls) rice to fill the tummy together with a bowl of miso soup and a plate of fruits.

The meal you see above (except for the wild uni) is the $60++ set. If you let Chef Kevin know that you are from the blog, he will also throw in a few items for you to try depending on the season. There is of course the cheaper lunch set at $30++ but if you want to taste the good stuff, you will need to spend a bit more. 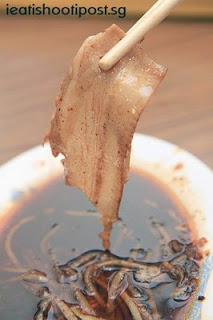