The Resurrection of Chin Mee Chin!

There are not many culinary institutions left in Singapore, much less those that can boast of an almost 100-year history.  So when Chin Mee Chin shuttered its gates in 2018, I am sure that fans of the old-school confectionery must have been crestfallen.  However, back then, there was talk of a possible resurrection, so we all held up hope that the gates would open again someday soon.

Days passed, then weeks, then months.  Every time, I drove past the row of shophouses, the grand old dame doesn’t seem to show any signs of coming out of its coma.  After some time, it was really beginning to look as if her condition might be terminal.

So when news broke that it was finally acquired and will open again under new management, we were all elated.  But, I must admit that I  was apprehensive that the new owners would do to Chin Mee Chin what investors have done with our other heritage brands which were given a new lease of life only to be turned into soulless zombies.

When I wrote about Chin Mee Chin back in in 2007, I pleaded:

Back then, there was a lot of development in the traditional Kopi and Kaya Toast scenery.  Our Kopi and Toast culture was transiting from independent coffee shops into chains located in shopping centers and I was afraid someone might buy out Chin Mee Chin and strip it of its iconic wall and floor tiles!  Thankfully, the family that ran the coffee shop at the time seemed content with whatever they were doing and so they managed to preserve this last bastion of pre-war culinary history. 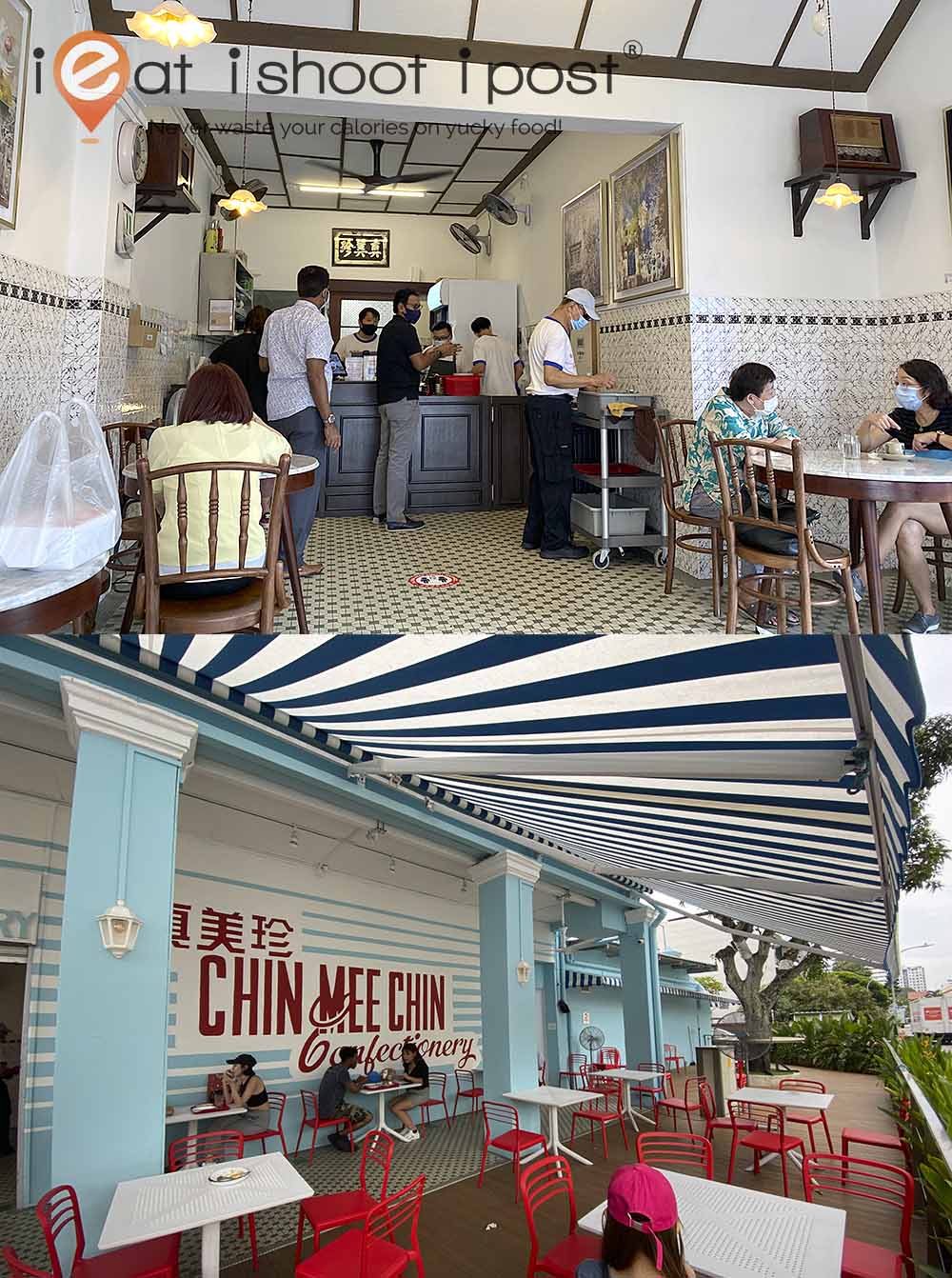 I am glad to report that the new owners, Ebb and Flow group, seem to have shared my sentiments.  According to their website, the CEO, Mr Lim Kian Chun happened to be a neighbor and long-time friend of the family and having grown up with the coffeeshop, was intent on preserving CMC as it was. 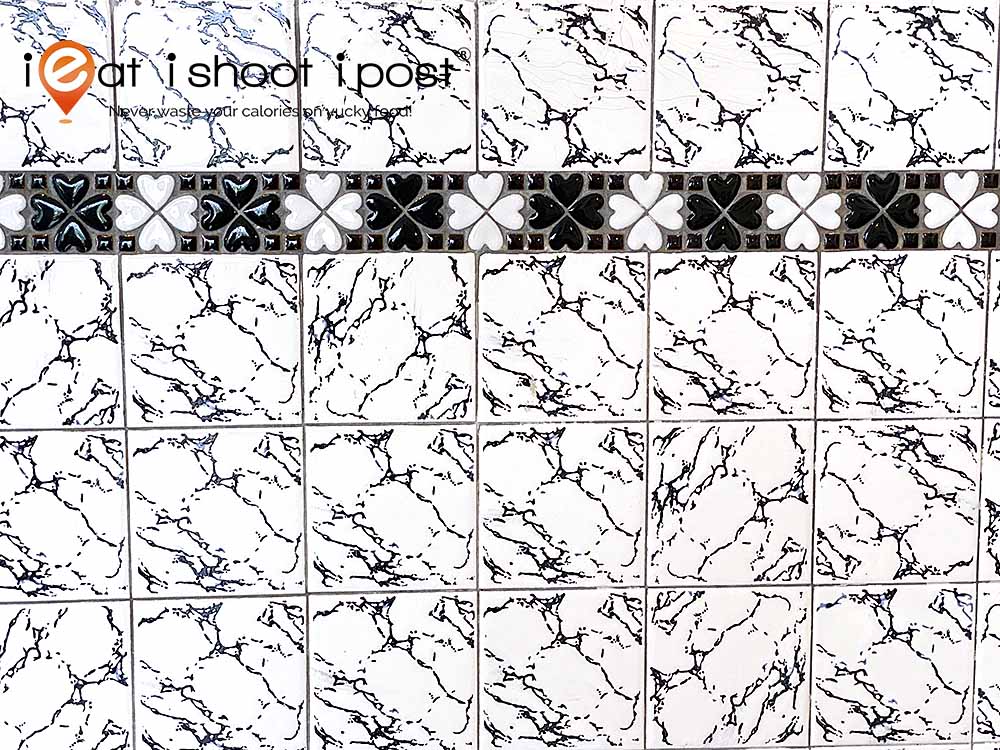 So, apart from a fresh new coat of paint, a new signboard, some renovation to the kitchen space, and the opening of a new outdoor area, the main dining space is still pretty much the same as before.  The familiar wall tiles and green mosaic floor tiles have been preserved and given a good scrubbing such that it looks brand new!

Hardcore fans of the place may have noticed the change in cups and saucers.  (compare with my old post) They have been replaced by the more common vintage kopitiam cups which are still easily available. The good thing is that they have now expanded the seating capacity by utilizing the space outside the coffee shop opposite the Catholic Church, so it is easier to find a seat compared to the old days.  They also have a proper counter now so you can place your order, unlike the old days where you had to scramble to get the attention of the aunties! 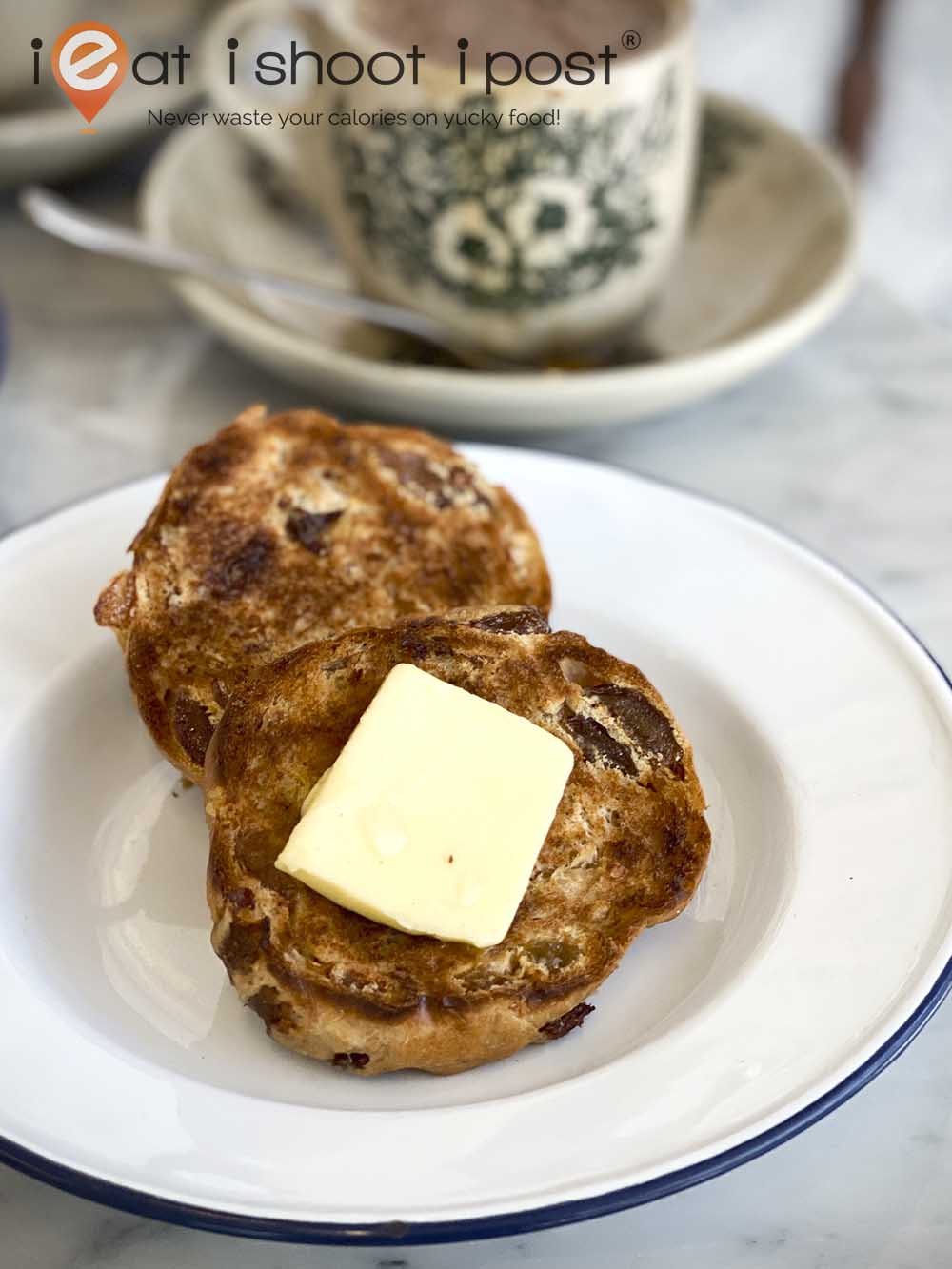 The honest truth is that the place might look like the old Chin Mee Chin, but one can’t help feeling that they haven’t really managed the recapture the soul of the old place.

I guess much of it resides in the aunties who used to run it.  I used to feel a little apprehensive about ordering my food as I always felt that if I said something wrong, I might just get kicked out of the place! That kind of thing is just impossible to replace. The new crew is young and more efficient but time will tell if they continue to be simply workers or if they stay long enough to embody a new Chin Mee Chin spirit.

Food-wise, they are still offering a similar range of items which we are all familiar with.  However, the buns are not the same as in the past.  They do have a “home-baked” quality about them but just not rustic in the same way.  In fact, it looks like the kind of buns I would bake at home, which isn’t really that good as I struggle with the uneven shape, wrinkly surface, and uninviting glaze!

The good thing is that they are not made with commercial soft bread pre-mixes and have stuck to the traditional way of making bread.  So, you can say that it’s like homemade buns.  However, the quality just isn’t quite there.  What is good, is that they are still toasting the buns over a charcoal fire and that the kaya is still being stirred manually over a stove, so that does add some authenticity back to the kaya toast. 4/5

I do like the cream horn which is nice and crisp and the gula melaka coffee chiffon cake is ok.  Overall, I feel that the buns need a bit more tweaking in order to capture that authentic old-school flavour. 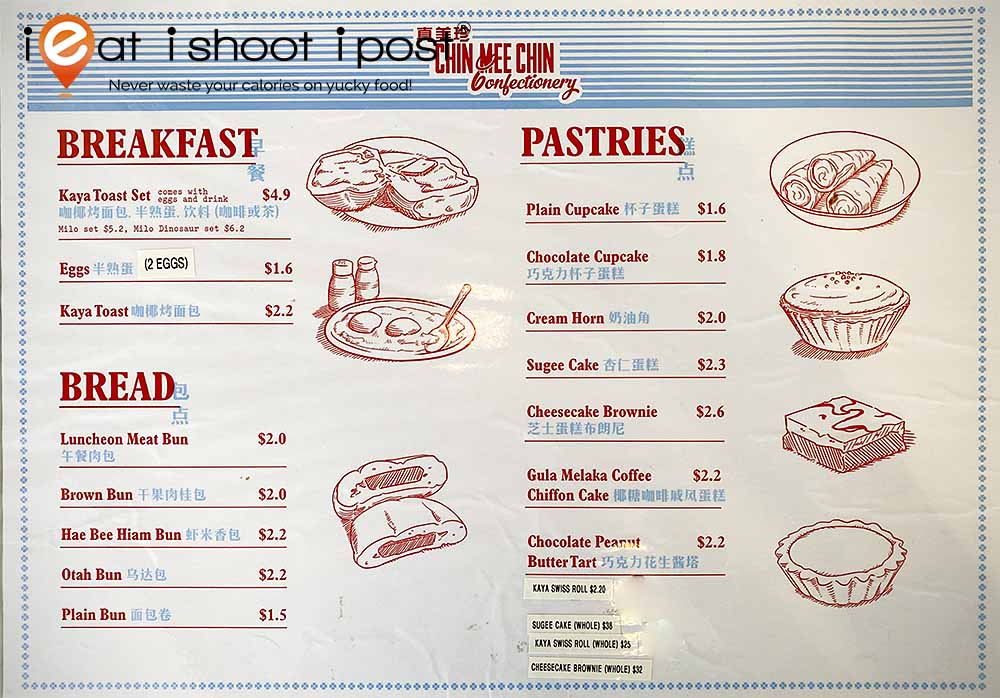 I have always been a staunch supporter of preserving heritage and so I am really happy that they have tried to preserve Chin Mee Chin in its original form.  I think they have managed to preserve the feel of the old Chin Mee Chin with the facelift but they haven’t quite recaptured the soul of the place.  I guess, it is impossible to replace familiar faces who have been there for decades, but when it comes to the food, I think a bit of soul searching might be in order.

Should they continue to try to replicate the menu of the past or serve what will appeal to the current generation?  According to their website, Chin Mee Chin has been around since the 1920’s but the signature cream horns, sugee cakes and brown buns were only introduced in the 1970’s to cater to the Eurasian community living around there at the time.  This begs the question as to whether they should also introduce some items which will appeal to the current generation of Singaporeans?

At the moment, I think they are in a bit of limbo.  The food is not authentic enough to appeal to old fans like me, neither is it sexy enough to appeal to a younger generation of Singaporeans.  After our visit, Lisa and I both felt that we might pop in once in a while if we are around the area and looking for a cup of kopi, but we don’t feel compelled to make a trip there just to buy some buns.  There are just too many better alternatives out there. 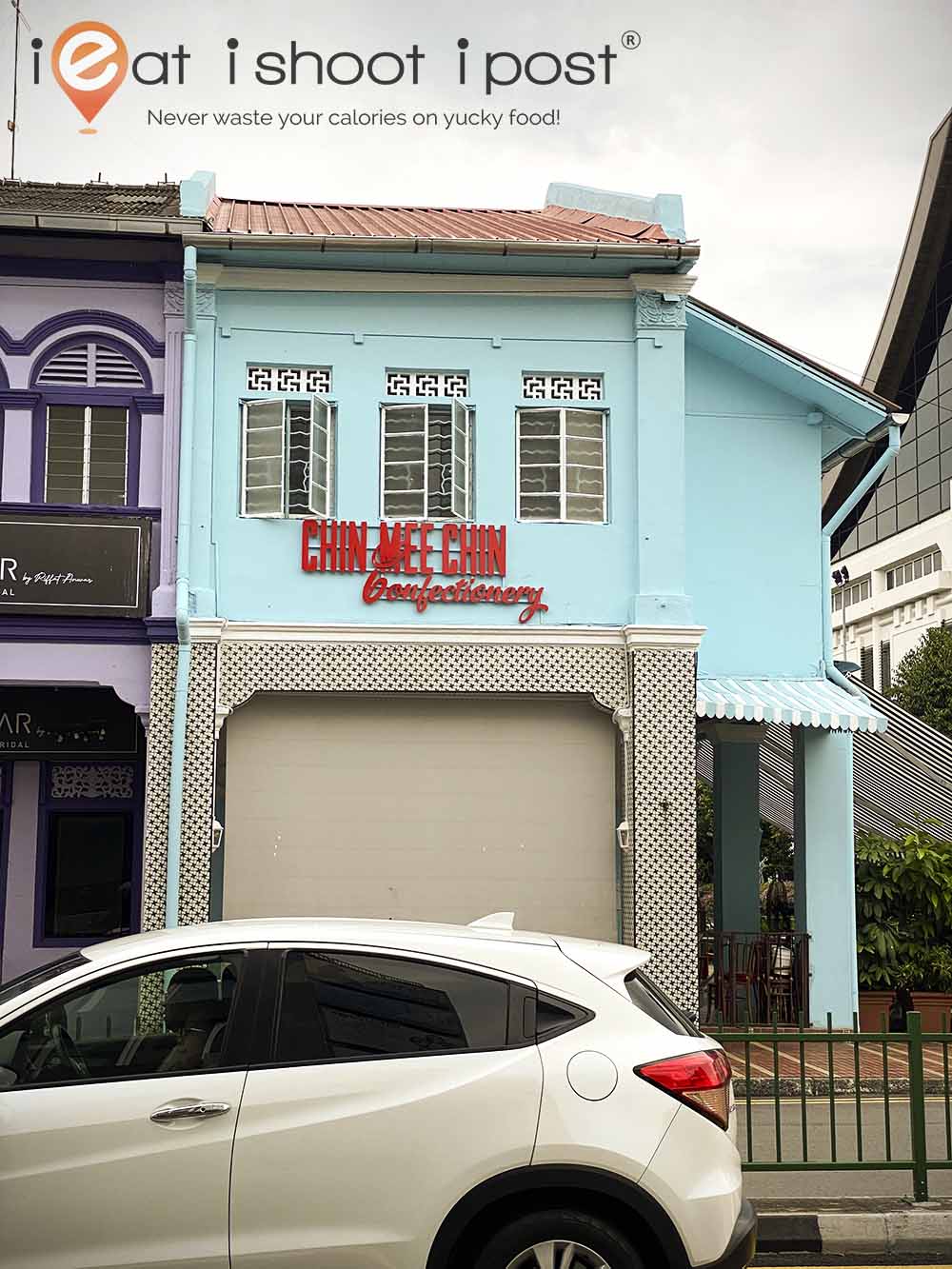 I have mixed feelings about Chin Mee Chin. On the one hand, I am ecstatic about their reopening and that they have preserved much of the original facade. However, I am a little disappointed with the quality of the pastries and buns.  Hopefully, this will improve over time as the bakers find their footing.  The thing I miss most is the original crew of aunties who used to run the place.  I guess that kind of thing is really irreplaceable. 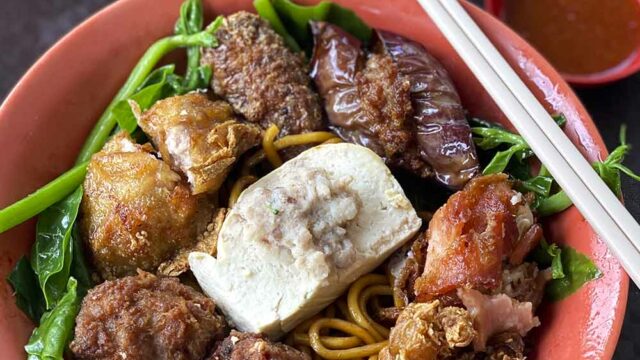 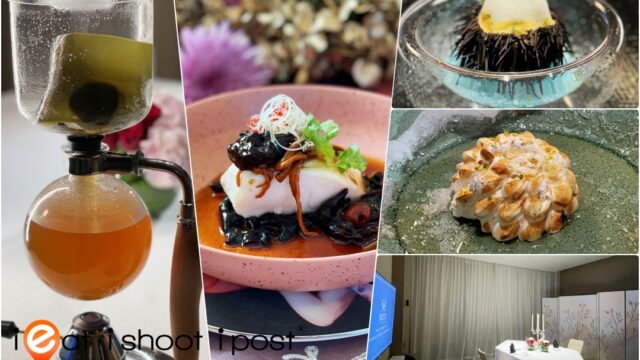