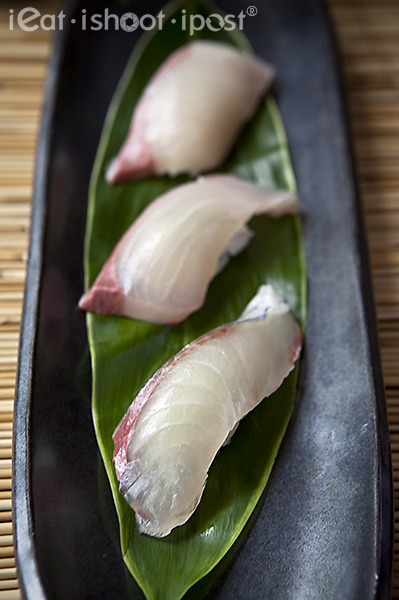 In my own Sushi journey, I have progressed from being dragged to eat Sushi by my wife to being able to enjoy cooked Sushi at the Sushi belt, to really appreciating Sushi at the Sushi Bar. The attraction of Sushi for me is a bit different from other cuisine. I still feel that a good bowl of Laksa has got more oomph than a piece of raw fish, with the exception of perhaps really good Uni. The beauty of Sushi lies in being able to appreciate food in its most fundamental form and part of the fun of eating sushi is to be able to tell what kind of seafood you are presented with by your itamae (Sushi Chef) and be able to appreciate its quality through nuances in texture and taste.

It is not easy to do research on Sushi. Most of the best resources are in Japanese and the information that I am seeking is scattered across the internet and just a few good books in English. I have written a bit on Sushi before, but not in a systematic fashion. With the Sushi Files, I basically document my notes on the different tane (toppings) in a more systematic fashion. I hope you all can come on board to make your own contribution to this project through your comments so that we can all learn together. Maybe we can organize lunch for our Sushi Tsus (experts) to exchange notes about Sushi one day!

The Sushi chefs tell me that when they eat sushi, their favourite is Shiromi-dane which was considered the premier Sushi tane in the good old days before the Japanese learnt how to eat fatty food from the Americans after WWII. You can understand why the Japanese, with their cultural bent on all things clean and simple would like Shiromi-dane. In order to really discern the clean fresh flavours of Shiromi-dane, Sushi Chefs in the past were not allowed to eat chillies or smoke in order to sharpen their sense of taste.

When it comes to Shiomi-dane, freshness is key. Actually freshness is key in all Sushi, but expecially so in Shiromi-dane. Freshness can mean many things. A just killed live fish is fresh, but so is a fish that has been kept on ice for a few days, or a fish that has be blast frozen and thawed properly, as in the case of Tuna. With Shiromi-dane, the fish typically has to eaten within a few days after it has given up the ghost and unlike tuna, it should never be frozen.

When a fish dies, it goes through a process called rigor mortis where the muscles stiffen up. It makes a difference if you eat the fish before, during or after this process. Rigor mortis usually happens after the fish is dead and can last for a few hours depending on species and how it was killed. If you eat the fish before rigor mortis, it is ikijime, after that it is nojime. Whether you like to eat it ikijime or nojime is really a matter of preference. In Japan, those people living by the sea prefer ikijime because the flesh is more chewy. Those living inland like it nojime, probably because they don’t really have a choice at first, but after the meat has undergone rigor mortis, it becomes more tender and flavourful. If you speak to a Teochew Ah Hia, he will tell you the same thing. You don’t need to eat fish fresh out of a tank. In fact, fish that has died and has been put on ice for one or two days have more flavour than freshly killed fish.

In Singapore, most of the sushi fish that we eat is nojime. Take the Kanpachi for instance, it is usually killed in the wee hours of the morning and then processed and shipped such that it arrives at the Sushi restaurant the next day. So the fish would have typically gone through the rigor mortis stage already when it arrives. The reason that we have to buy sushi fish from Japan is precisely because the Japanese have systems in place to control how the fish goes through the rigor mortis process. They kill the fish and process it such that the fish goes through rigor mortis in a fashion that is least detrimental to the flesh. That usually means killing the fish quickly in a way that the fish is not distressed, bleeding it (ikejime method) and immediately chilling it so that rigor mortis takes place at low temperatures.

Today we are going to cover three very similar tane viz Hamachi, Kanpachi and Shima Aji. In terms of price, The Shima Aji is the most expensive and the Hamachi is the cheapest. All three look and taste very similar, so as a sushi enthusiast, you should be able to tell them apart. 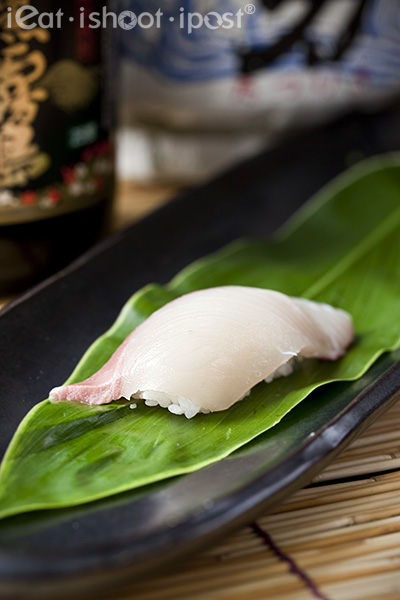 The name Hamachi is usually given to the Japanese Yellowtail that is served at the sushi bar. This fish has as many names as Imelda Marcos has shoes, so it can be very confusing. The Japanese refer to this type of fish Shusse uo, which means that the fish has different names at different stages of its growth. It only gets worse because different regions of Japan have their own names for the fish in different stages of growth! In Tokyo itself, the fish is never called Hamachi, although it is available as Hamachi at the Sushi bar. It is only known as Hamachi in Osaka when it reaches the pre-pubescence stage (less than 3 feet) where it is prime for Sushi. The term Buri is usually given to the Japanese Yellowtail that has reached adult stage. By that time it is too fatty for sushi and is best for grilling. Some chefs use the term Hamachi to denote the farmed Yellowtail while Buri refers to the wild yellowtail. In the Singapore context, I find that they will usually call the fish Hamachi when it is used for sushi and Buri when they grill it. 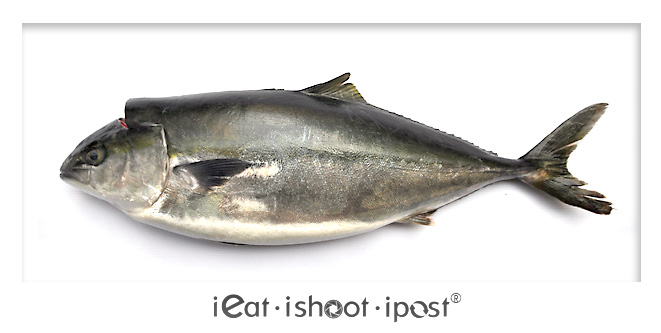 The Tane
Hamachi is the fattest of all the Shiromi-dane. With the farmed Hamachi, they are given special feed so that their fat level can go up to as high as 30%. The taste is succulent, rich and buttery and many people liken it to a nice fatty piece of Otoro (Tuna belly). The texture is perceptively softer then the learner Kanpachi and it typically ends on a fishier note compared to Kanpachi. If you compare Hamachi and Kanpachi side by side, you can see that the Hamachi is less translucent. They both will have the bit of red muscle (chiai) which is left on to make it more attractive.

In the Singapore context, Hamachi is widely available at most mid ranged sushi bars but the higher end ones will stock Kanpachi instead. The lower end sushi bars will also cut the Hamachi thinner than what it should be. A good slice of Hamachi should be at least 6mm to 1 cm thick in order to get the best mouth feel.

Click to watch Video of Hamachi farming in Japan. 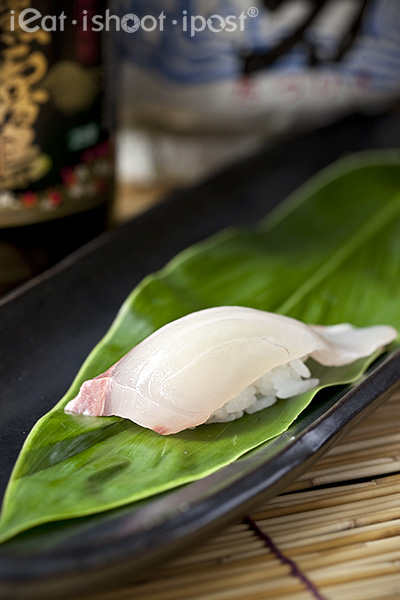 If you think of the Hamachi as a VW Beetle, then the Kanpachi is more like a Porche. It is a bigger fish, more sleek and looks like its got an axe to grind. The two stripes on the face that make it look as if it has bushy eyebrows and together with its dark face, the fish actually looks like a pescatarian version of Justice Bao. The Japanese named the fish after these two stripes which look like an inverted character for the number eight, pachi (八), hence Kanpachi which means “eight between the eyes”. Note that Kampachi is different from Kanpachi. “Kona Kampachi” is a brand name for the Almaco Jack (Seriola lalandi) which is farmed in Hawaii. 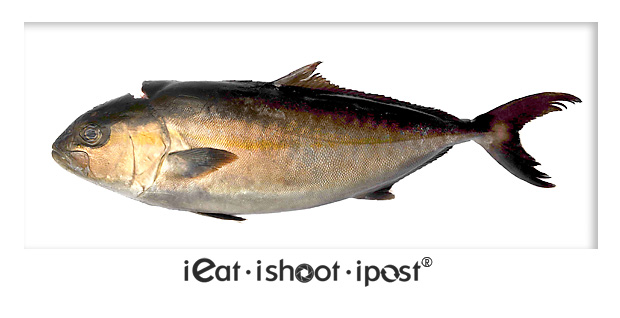 The Tane
Taste is subjective of course, but most Sushi experts I speak to prefer the brighter taste of Kanpachi over the heavier Hamachi. Kanpachi is more expensive than Hamachi although it is also similarly farmed in Japan. At higher end Sushi-yas you might occasionally find wild Kanpachi which is in season in late summer. Most of the higher end Sushi bars in Singapore serve Kanpachi rather than Hamachi. The texture of the fish is firmer and less buttery than Hamachi but it does depend on whether you ate it the day it arrives or the next day when it gets softer. Kanpachi belly is excellent if it is available and if your itamae offiers it to you, it means that you have been to his bar often enough to earn VIP status. Kanpachi belly is a great substitute for Otoro when you are going for something smooth and luxurious.

With the concerns about radiation affecting the seafood coming from Japan (Seafood from Japan is 100% safe btw, pls read my post on this issue), some places have started offering Kanpachi from Australia. This is usually the Australian Yellowtail Kingfish which is also known as Hiramasa. This is the same fish that is farmed in Hawaii where it is known as Kampachi which is the Gold Striped Amberjack (Seriola lalandi). Most chefs I talk to prefer to use Kanpachi rather than Hiramasa for sushi. I guess it is ok to sell Hiramasa, but it should be labelled as such and not be passed off as Kanpachi. Hiramasa is a cheaper fish (approx $30/kg) compared to Kanpachi (approx $50/kg) so if they sell you Hiramasa, there should be a significant price difference. 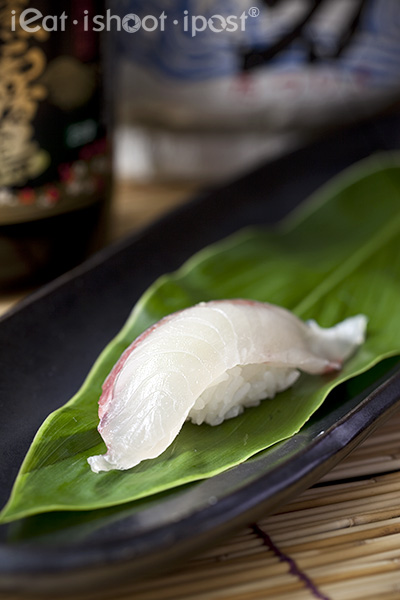 This is the smallest of the three jacks and it is a fish that is also farmed extensively in Japan. The fish can grow to a length of 3 feet but it is at its prime for Sushi when it is around 1 foot long. Although the fish is called Shima (striped) Aji, it tastes very different from Aji (Horse Mackeral) which belongs to the class of fish with sliver skin and strong fishy taste (Hikari mono). It is best for Sushi during the Summer when it is spawning. 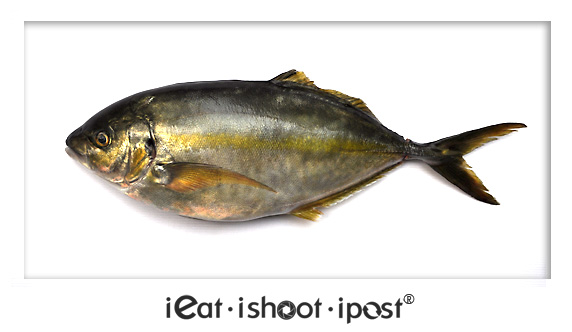 The Tane:
Shima Aji is very similar to Kanpachi and it is the most expensive of the Jacks. Sushi Tsus like the clean, bright tasting flesh which would be more Al Dente than Hamachi and Kanpachi if it is really fresh. If you are comparing Shima Aji and Kanpachi side by side, the Kanpachi might look slightly pinkish and the Shima Aji will be clear and have a nice oily sheen on the surface. That sheen is the clearest indicator that you are getting real Shima Aji. The difference in taste occurs right at the end after swallowing. Hamachi has a distinctly more fishy odour while Shima Aji ends with a very calm natural sweet tone (Teochews all it Karm Karm). Being a smaller fish, the tane is often slightly narrower than Kanpachi. Any self respecting Sushi bar will have this fish on their menu. 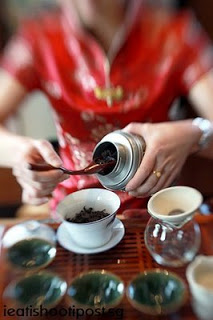 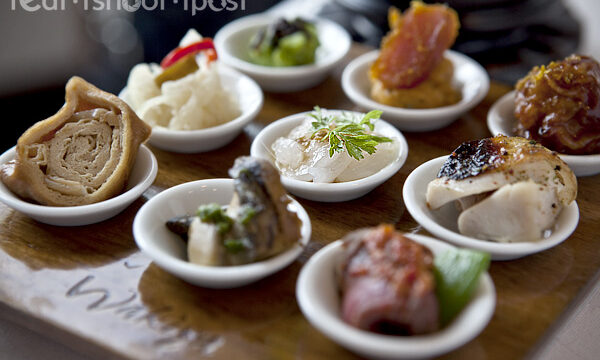