Update 10 Mar 2021
Chef Philip has since left the establishment.

Fancy a restaurant with the audacity to call itself “The REAL Peranakan!”  Being such a close knit community, I am sure the other Peranakan restaurants must be rather riled at the impudence of the brand new upstart!

What, you mean to say the rest of us are “Bluff” Peranakan is it?

But as you well know, there is no such thing as a canon of Peranakan cuisine. Every Peranakan household feels that their recipe is the right version of each dish.  If you grew up eating Ayam Buah Keluak where the kernals are left intact in the shell, then you’d feel indignant that someone else felt they needed to scoop out the meat, adulterate it with spices and other ingredients and stuff it back into the nut.  On the other hand, if you grew up with stuffed nuts, then you’d probably feel that the cook was just plain lazy.

So we can argue over the matter till the cows come home, or alternatively,  we can sit back, recite a pantun and just accept that what is like that is just like that! 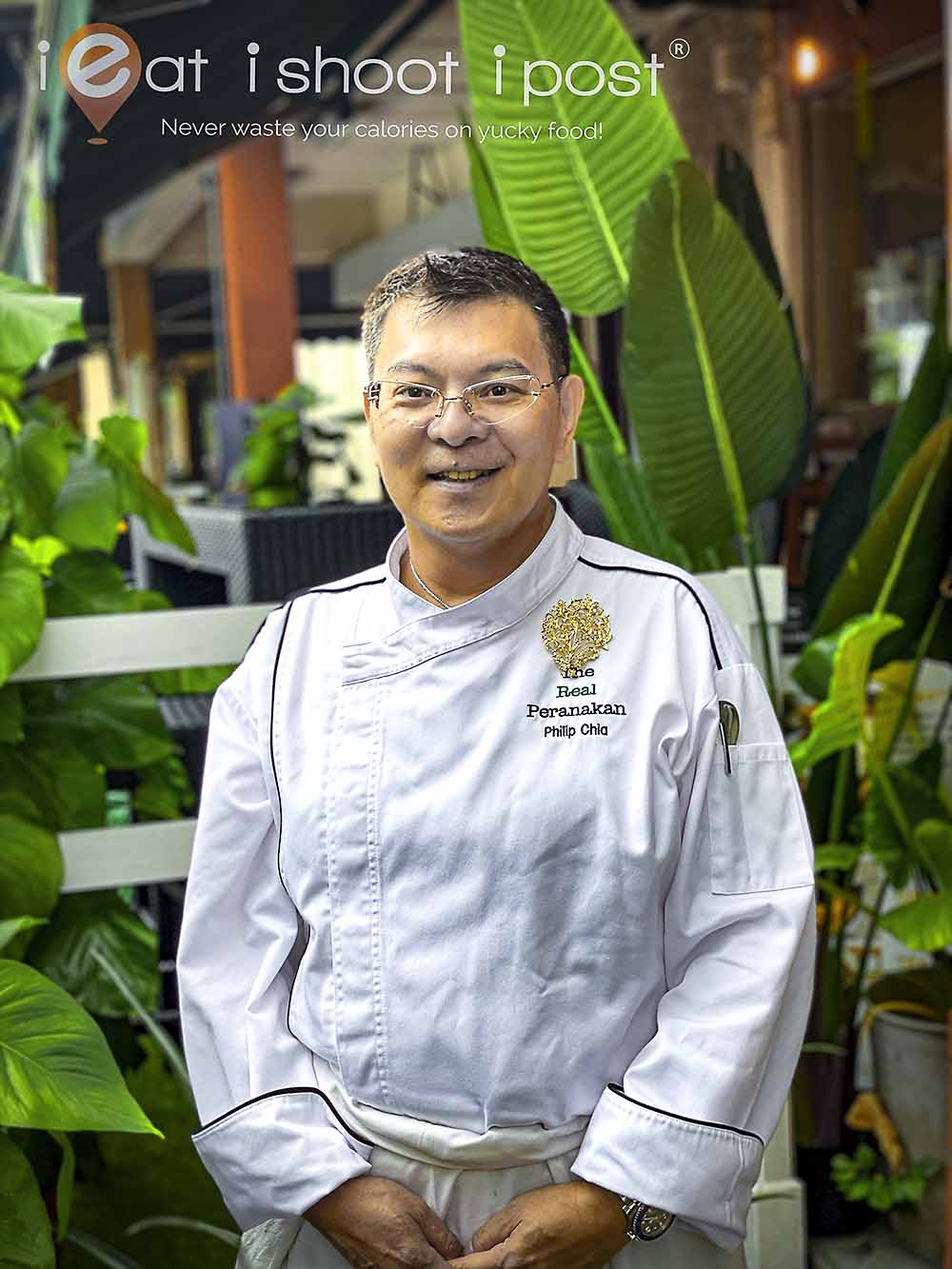 What is “Real” about The Real Peranakan is that the both the owner and the chef are Peranakans.  Chef Philip Chia in particular is perhaps the last of a breed of Peranakans who grew up spending most of his time in the kitchen.  His own story is almost as dramatic as “The Little Nonya” TV Series in which he was involved as the culinary consultant. In a nutshell, he was born to a Peranakan family, the youngest of 13 kids.  Because of financial woes his father couldn’t pay the nanny who was hired to look after him, so he was sold to her for a top-up sum of $500.  Being the youngest of 4 in his adopted family, he was bullied by his elder siblings and made to do the housework. (Sounds like Cinderella, doesn’t it) His adopted mother also forced him to work in the kitchen where he would spend most of the time pounding the rempah!  It might have been tough when he was a kid, but now he is one of only a few chefs who are gatekeepers of traditional Peranakan recipes, some of which are on the verge of extinction. 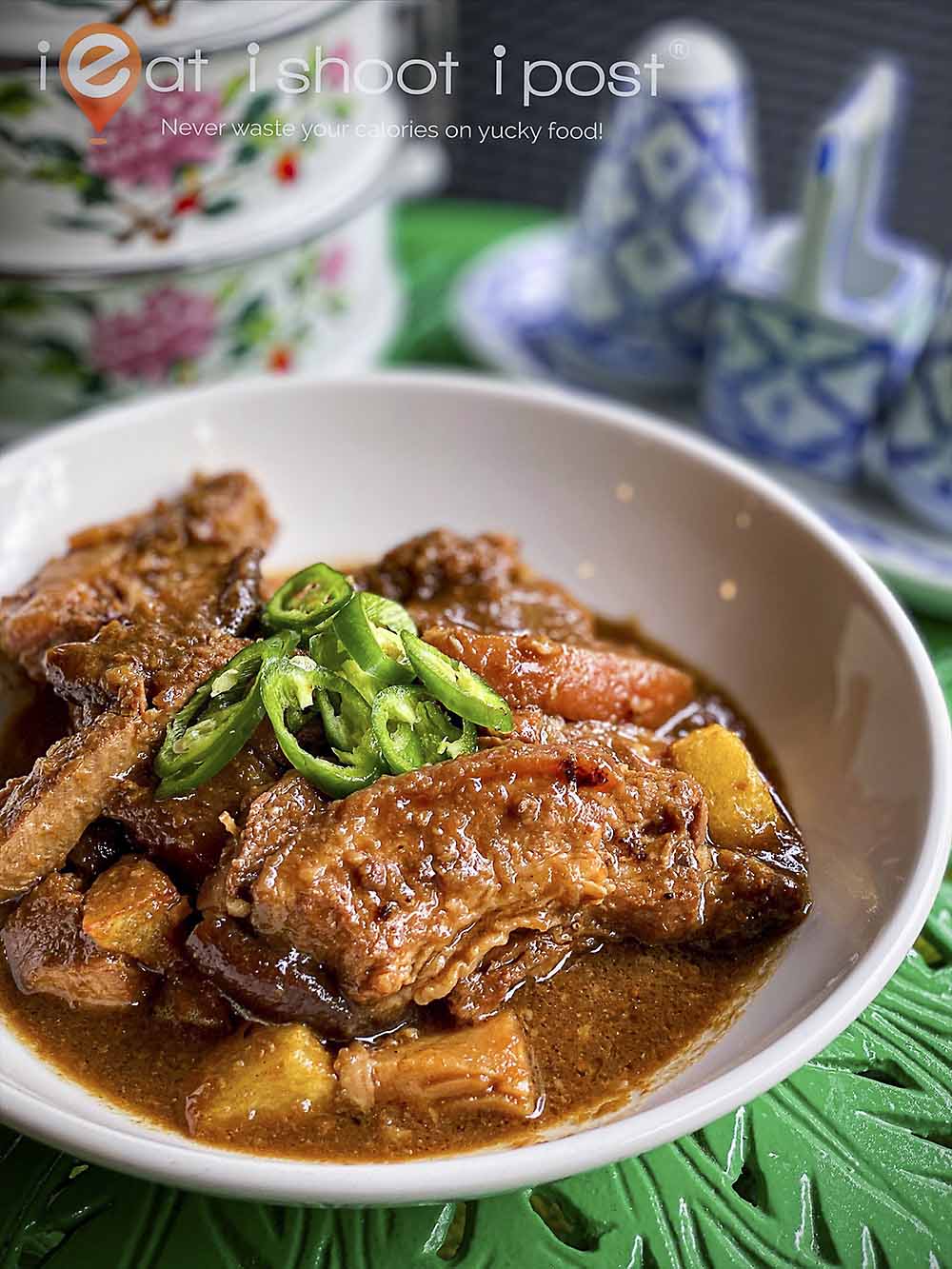 Chef Philip had just taken over from the original Chef who started the restaurant earlier in the year and is still in the process of fine tuning the existing recipes on the menu.  At the time of our tasting, quite a few of the recipes still belonged to the previous chef which explains why some dishes were really good while others were quite forgettable.

Of the dishes we had, the best dishes for me were the babi pongtay and udang belimbing.  He serves his babi pongtay with fresh sliced green chilli which is a nice touch and the pork was braised till the texure is just right — not too soft that it is falling apart but tender enough so the fats melt.  4.25/5 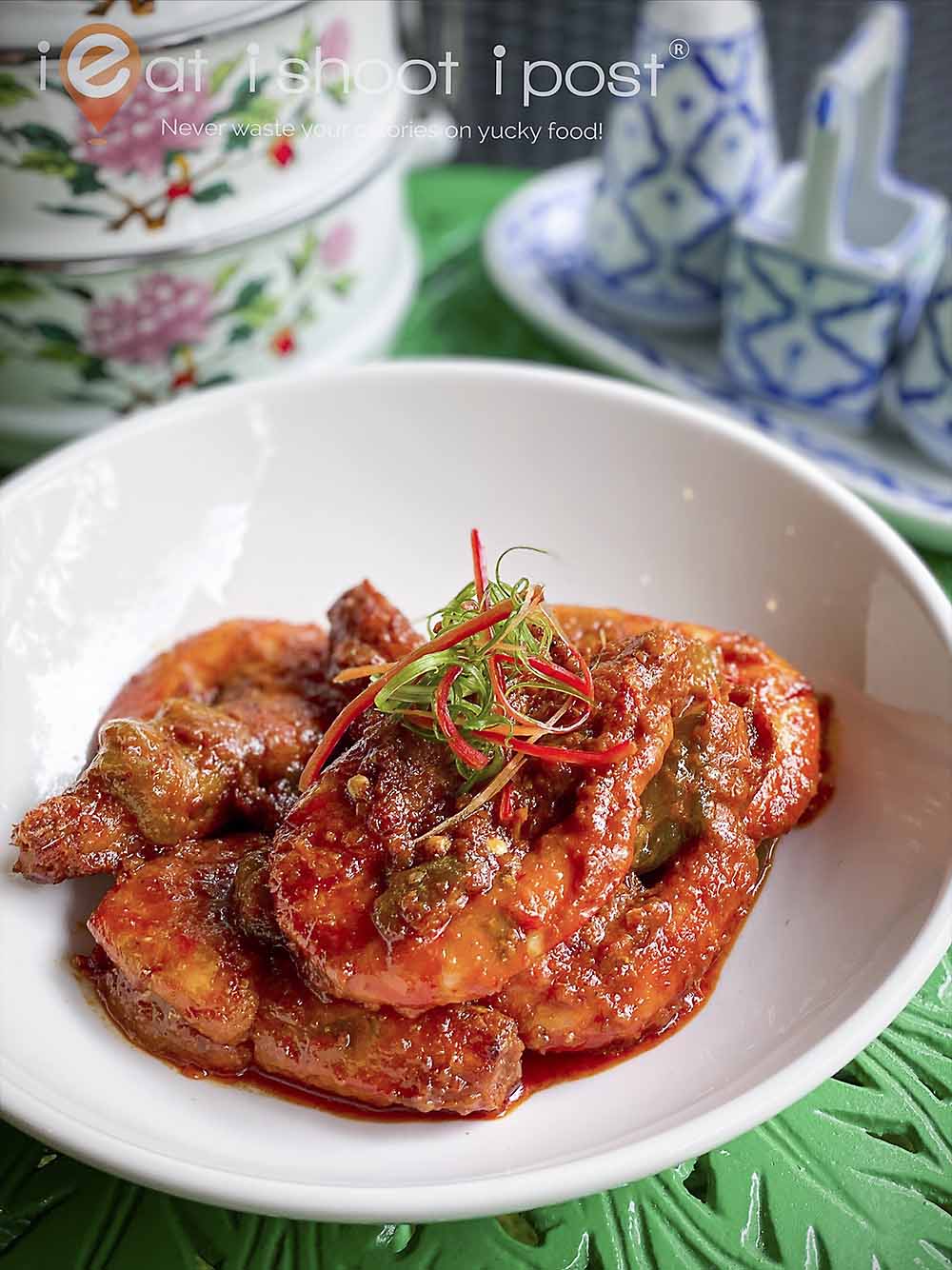 The udang belimbing had a lovely tang and was really well balanced and the prawns were nice and sweet.  The sweet and sour tang of this dish serves as a nice contrast to the other dishes which can be a tad heavy.  4.25/5 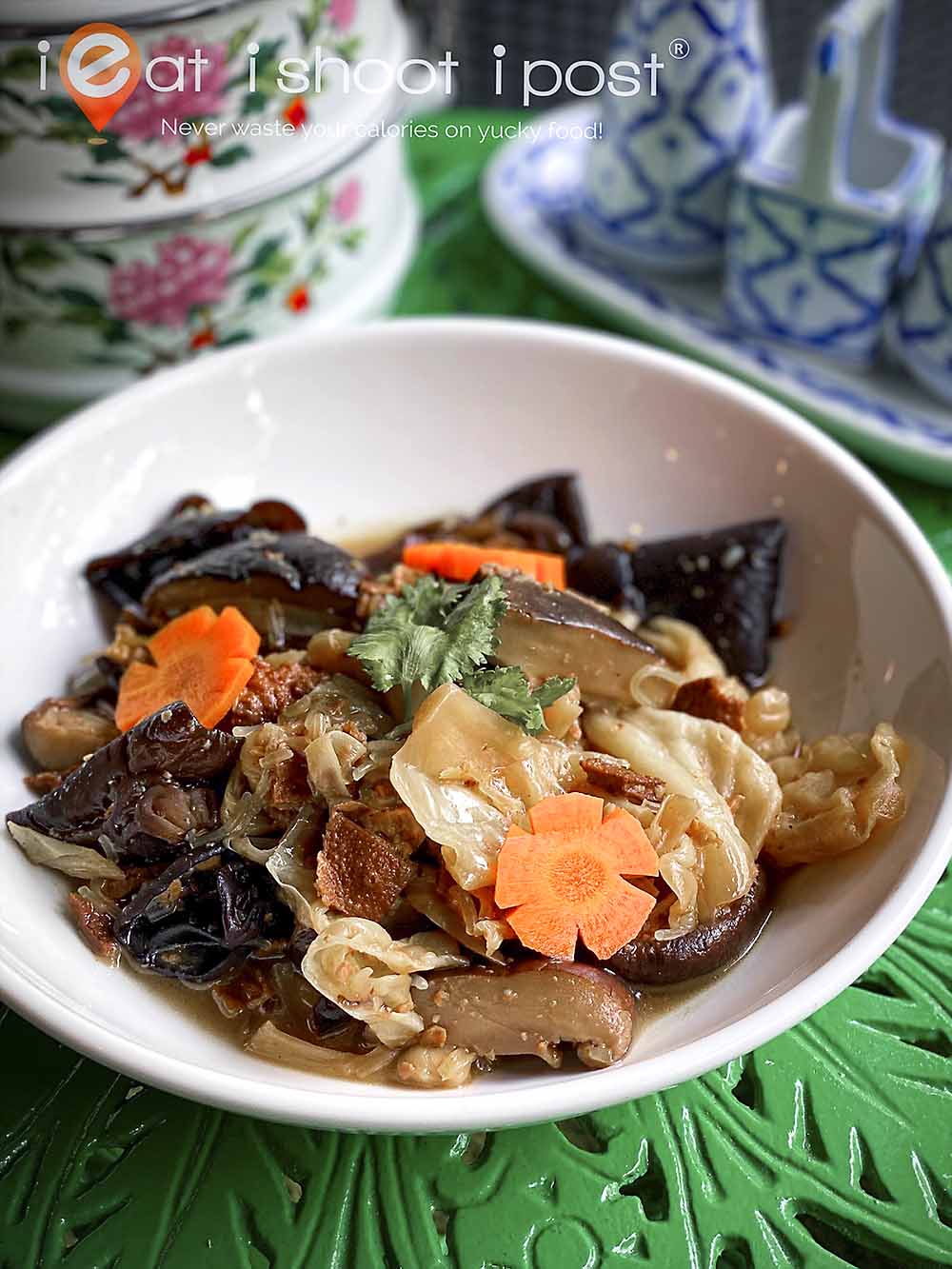 The iconic ayam buah keluak was good.  Chef’s style is to scoop out the flesh, mix it and stuff it back in. It did lack that little something that makes it so irrestible that you would need to take a second helping of rice and self declare a “Cheat Day”. Chef also does a pork trotter buah keluak which I actually prefer to the chicken version! 4/5

The other dishes which I think still needs work is the fish maw soup.  It is great that they make their own pork  and prawn balls, but I felt the texture was just too soft and not bouncy enough.  3.5/5

I also felt the chap chye could have been much better.  They do use quite a bit of fried tau kee which is nice but the overall flavour of the dish was just lacking that “POW!” 3.5/5 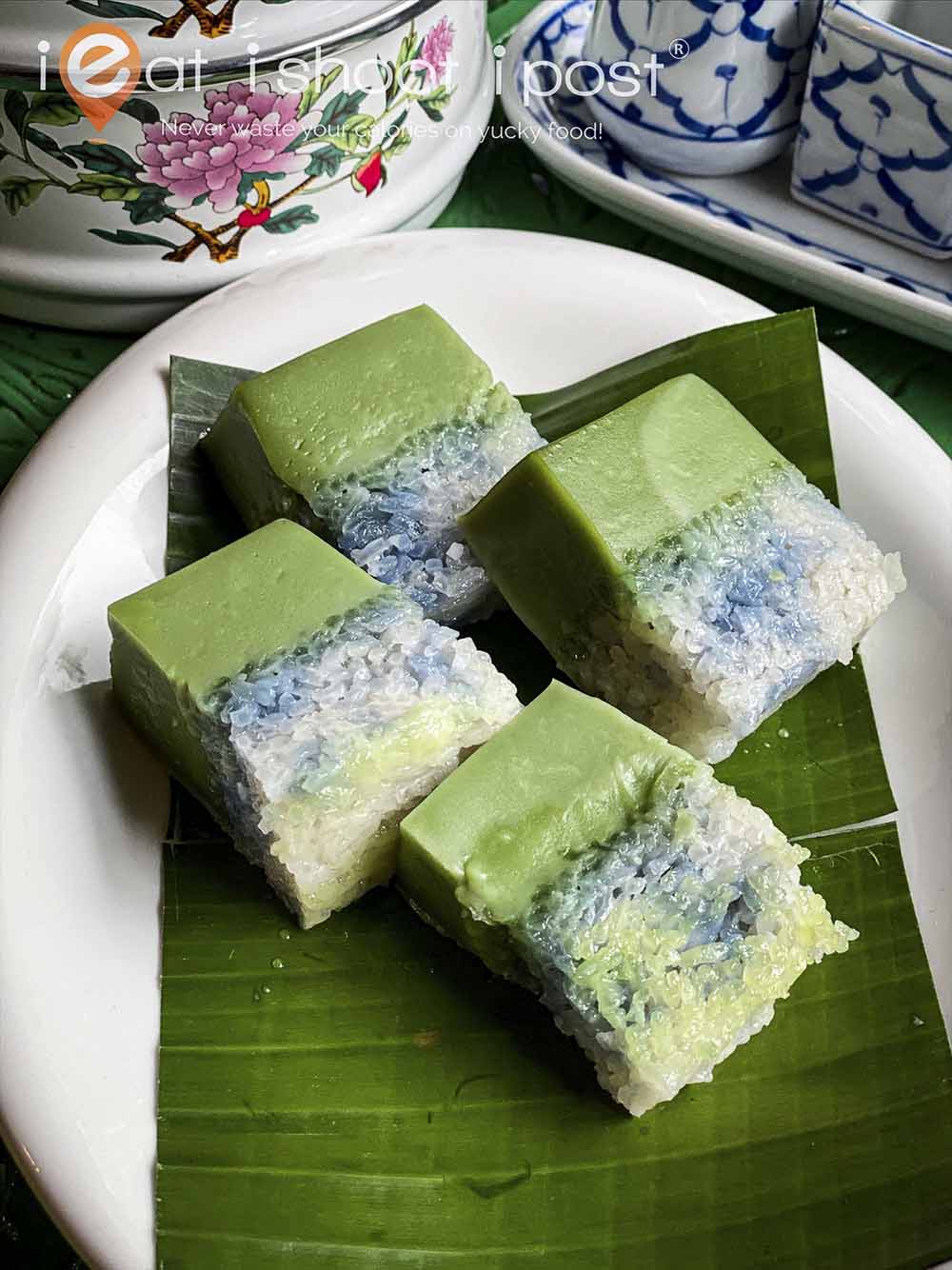 The Kueh Salat was good but again, it still lacks that X Factor that would make me order it again.  3.5/5 Having shared some recipe notes with Chef, I sense that the dishes that day just weren’t an accurate reflexion of his true potential.  Hopefully, the restaurant owners will give him enough leeway for him to truly express himself through his food.

Disclosure
This was a media tasting.  That means we were hosted with no obligation to write unless I felt the food was good enough. 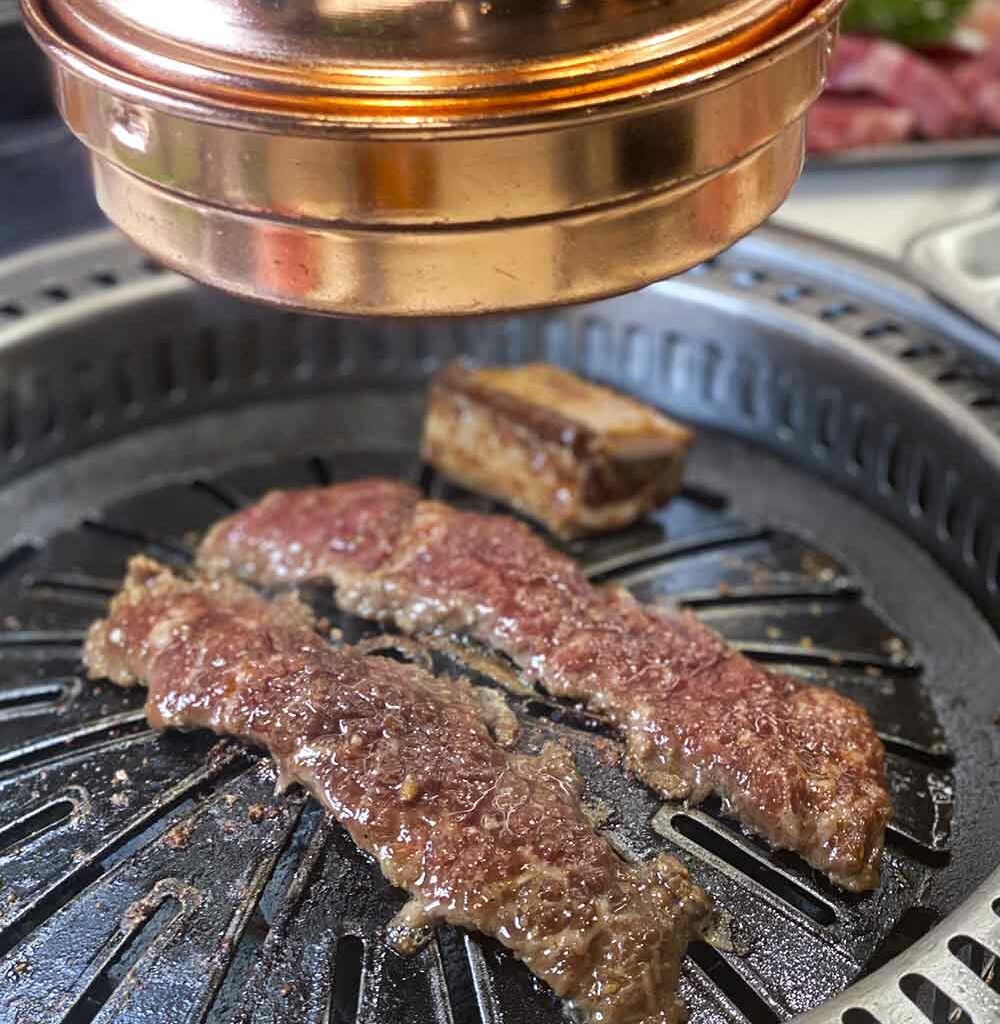 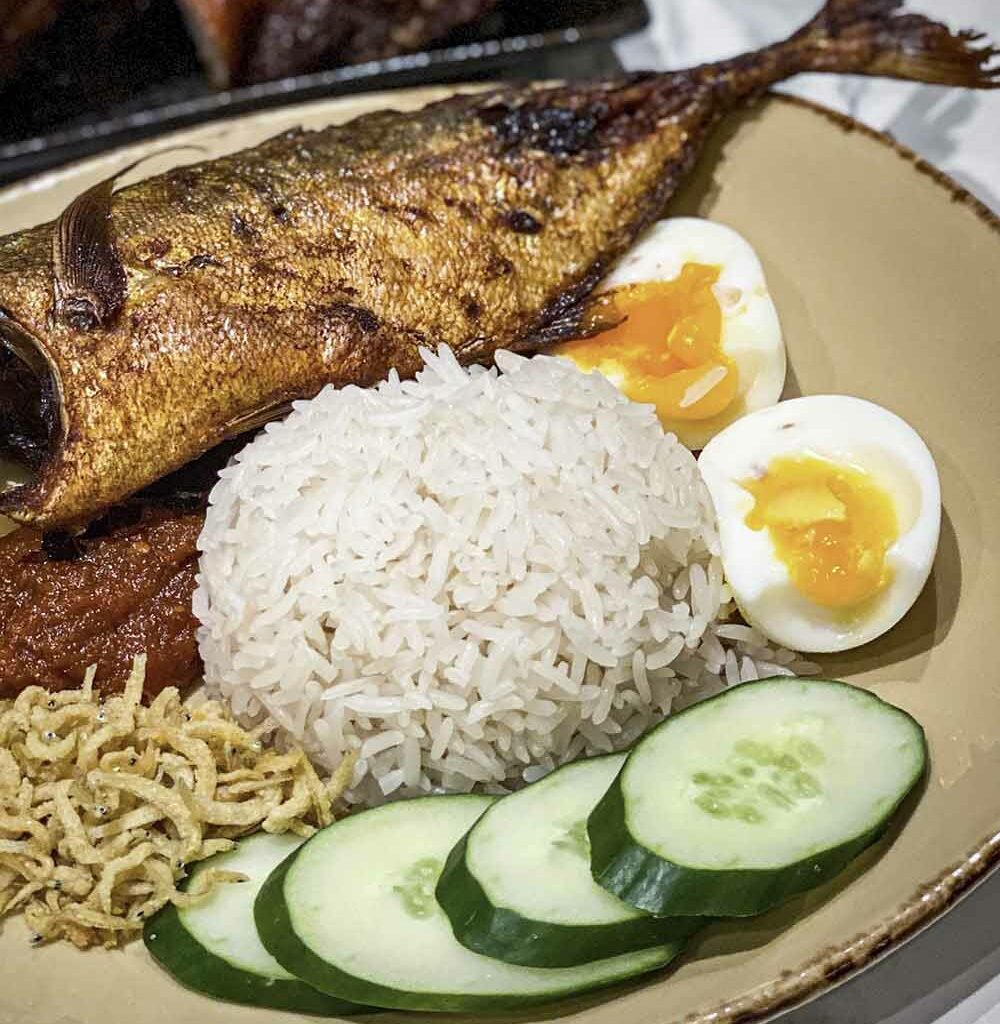 The beef rendang is tender but missing something. Tasted flat. The Babi buah keluat was tender and nice but the sauce also missed something. The otah was not a good choice , totaling missing the richness of coconut milk. The chapchai was good. For dessert we ordered 2 bowls of chendol. It was weird to find a ball of vanilla ice cream on top of the chendol. Totally destroying the authencity of chendol. It would have been great to find a ball of coconut ice cream with which would have complemented the dessert. Also missing are the atapchee which is found in Peranakan chendol.

Overall it was pricey and think rated only 3/5. I don’t think we will return again

Just to add, the service is good staff are very polite. The ambience is nice for a family meal. If the food can be improved , it will be a good place to bring the family .

Apologies for the late reply, and thank you for your feedback. We have made many major and necessary changes to the execution of our dishes since November 2020, and would like to invite you to contact us at 97831118 to co-ordinate an opportunity for us to host you again.

Went there on Sunday and the drinks were a turn off. Milo was watery and bland. breakfast laksa was watery and lacking any coconut milk. Overall pricey food and tasted like it came from ready made packets

Oh dear. We’ve highlighted your experience to the restaurant, so hopefully they will be doing something about it.

Thank you for your feedback and comments. We have looked into the matter and have identified areas of possible operational lapses and have taken steps to ensure that they do not reoccur. We sincerely apologise for the unpleasant experience at our outlet, and if you could contact us at our hotline number 97831118, we would be honoured to host you at a date and time of your convenience. Our sincerest apologies and we hope to hear from you soon!

Went there with family to try out the food on 29 Jan 21. I noticed this restaurant when we at the Pepperoni recently.
We ordered Ngoh Hiang, Beef Rendang, Sambal Petai Ikan Bilis and Chap Chye. We were impressed by the delicious food. The Beef Rendang stood out as the dish we enjoyed most. Its very tender and the spices are not too strong. The Ngoh Hiang is very tasty. The Sambal Petai Ikan Bilis was also delicious. A generous helping of ikan bilis covered the petai. The Chap Chye is OK too. Enjoyed the meal and good service.
Looking forward to bringing friends there to try. 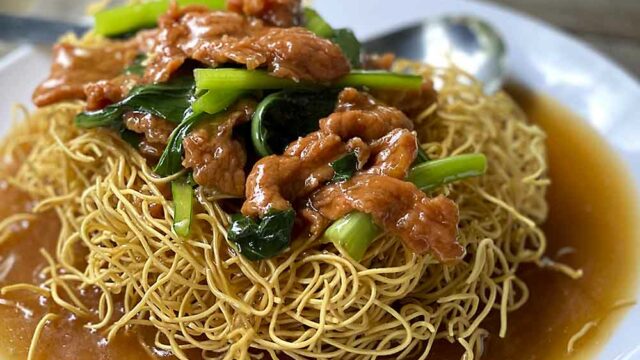 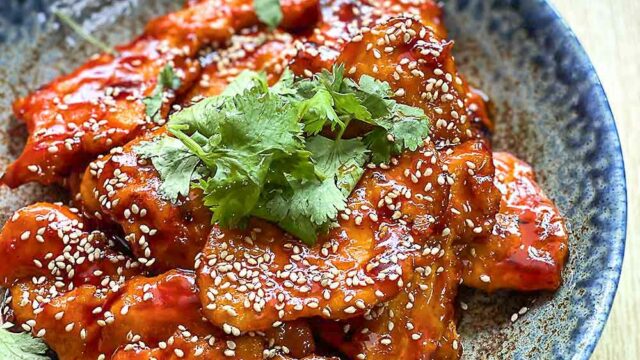