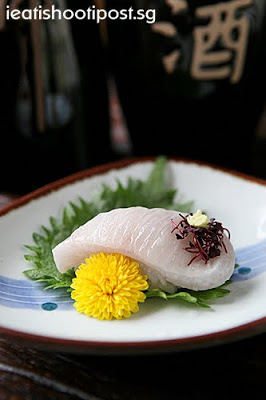 I use the word supplemental because it reminds me of how Captain Kirk used to say in Star Trek when he was recording his Captain’s log. It just means that this is a quick post to add on to the other sushi posts.

When it comes to Sushi, the most expensive items are usually the Otoro (Tuna Belly) and Uni (Sea Urchin). That was what I thought until I came across this lesser known delicacy called Engawa. This is basically the belly part of the flounder (Hiramae) and is prized for its high fat content and more concentrated flavour. I found it a bit chewy, but still sweet and fresh tasting. It is as expensive as Otoro and Uni, so if given a choice, I think I would still prefer to have Uni.

I had this particular sushi at Tomo Izakaya, which is at the Esplanade over looking the Marina Bay. They sell a wide variety of Japanese cuisine, thus the term “Izakaya”. I have always found that braised items like the Buta Kakuni quite nice there. 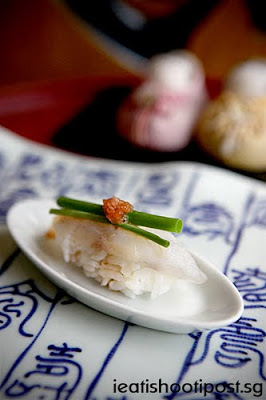 Fugu – eat at your own peril

Back over at my usual Sushi place, Nogawa, Chef Kevin tells me that I had covered most of the fish he had that day except for the Fugu.

Fugu, as you know, is the legendary Japanese blowfish which can be fatal if the chef prepares the fish wrongly. Do you remember that Simpsons episode where Homer thought he ate poisonous fugu and prepares for his impending death? What happened was that the chef was busy with “something” and asked his apprentice to take over the sushi preparation. When Homer heard about fugu, he insisted on eating it even though the waiter tried to dissuade him. In between, there is this hilarious scene where they had this bespectacled Japanese man who can barely speak Engrish bellowing out a Karaoke tune with a voice like Elvis!

Anyway, back to Fugu. Nowadays, death by fugu seldom happens because most of the fugu is farmed. Wild fugu feeds on a certain type of bacteria which contains a neurotoxin which can cause people to stop breathing. This neurotoxin gets concentrated in the liver of the fish and so if the chef accidentally cuts the liver of the fish, disaster can occur. Farmed fugu are raised in an environment where they don’t get exposed to such bacteria, so they are non-poisonous.

I honestly don’t know what the fuss is about Fugu, it tastes much like Kanpachi and Hirame, so I sure wouldn’t specially order it. However, I have seen on Japan Hour that there are places in Japan where you get a whole Fugu course where all the parts of the fish is eaten in a variety of ways. The expression on the hosts’ faces with the enthusiastic “Oishii! Oishii!” always makes me want to go there to try it out. 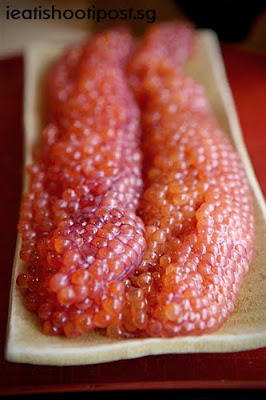 Now is the season for Nama sujiko which are fresh salmon roe sacs. I think most of us are familiar with the ubiquitous Ikura or salmon roe which is essentially prepared Nama sujiko. This stuff is very different from the normal Ikura that you get at cheap sushi places. The flavour is fresher and more intense. Served ice cold, the sacs just burst in your mouth with umami flavour!

I survived fugu! Do let us know if you are a fugu lover and why you like it so much! 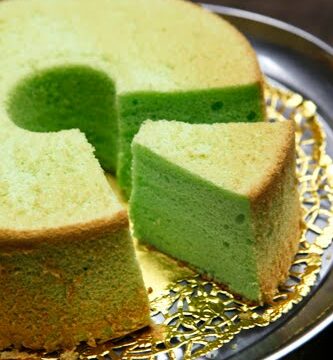 Cakes/Pastries
Sembawang Confectionary: Taste of the 80s – The Pandan Chiffon Cake
Next 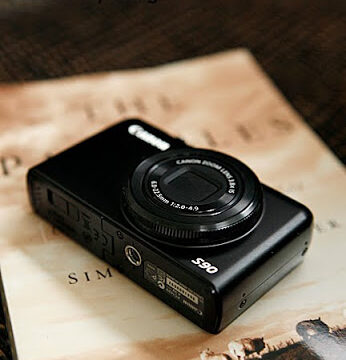