Bee Garden: The Making of a Buzzing Cashier Episode 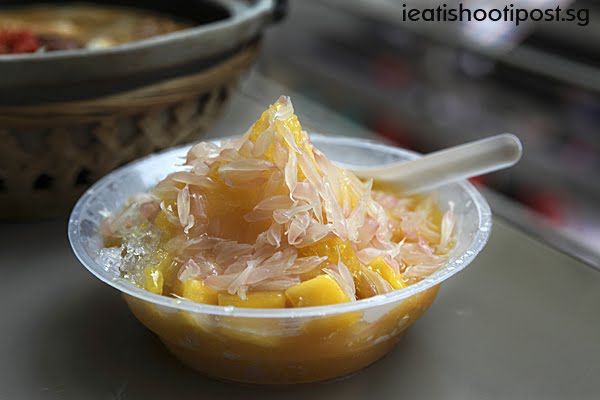 For the benefit of those who have never watched Channel 8’s Buzzing Cashier, the basic premise of the show is that the hosts go about Singapore identifying hawkers who are usually in financial difficulty and help them with a stall makeover. The show attracts a million viewers every week and after each episode, crowds will throng the stall being featured to try out the dishes whose recipes have been imparted to the stall owners by some of Singapore’s best known chefs.

On the surface, one might think that it is just another variety show designed to pull at the heartstrings of Singaporeans and draw viewership so that they can sell the advertisements. This might be true, but having been involved in Season Two of Buzzing Cashier, I can sincerely say that the people who are actually involved with the making of the show really have a strong sense of social responsibility and their efforts to help the needy is exemplary.

I would like to take this opportunity to tell you about some of the behind the scene happenings in one particular episode of Buzzing Cashier. This episode concerns a young man named Chris whose ambition was to be a chef. Chris has been working the the kitchens of five star hotels and has even tried starting a chef for hire business for awhile. He is the only son of a family who runs a dessert stall at Commonwealth Crescent Food Centre. This dessert stall was at one time very well known and attracted long queues daily. The stall was started by his grandma and subsequently taken over by his father. 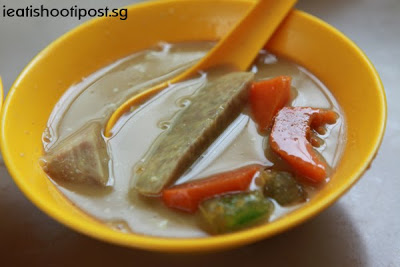 The “before” version of the Bubor Cha Cha

Unfortunately, his father suffered from diabetes and subsequently had to undergo an amputation. So his mother had to take over the stall. To make things worse, the food centre underwent renovation and the stall relocated from the ground floor to the 2nd floor. Gradually business started to fail and they were at one stage taking in less than $100 a day. On top of that, the father’s hospitalization bill was in excess of $50K and the other bills started to pile up.

To add fuel to the fire, Chris’ mother accidentally toppled the whole boiling pot of soup onto her legs and had to be admitted to hospital 3rd degree burns requiring skin grafting. Chris had suddenly gone from an aspiring chef to inheriting a dying family heirloom.

When Kim, the principle writer of Buzzing Cashier heard of his situation, she got to work immediately to arrange for the camera crew and Chef Eric Teo, Chief Executive Chef of the Mandarin Oriental group, to come to the rescue. Their idea is to help Chris turn the stall around by coming up with some really good dishes and get the crowds back with the publicity. This was one way to help Chris to pay off the huge mounting debts and give him a fighting chance at life. 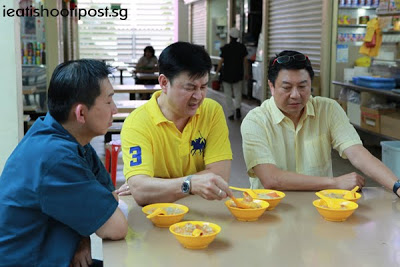 Chef William showing his disapproval of the desserts, the other two chefs each took turns to express their disapproval

When the three chefs came to inspect the stall, Chris was the one preparing the dessert, having learnt the recipe from word of mouth from his parents. The impression from the three visiting Chefs was not unexpected. The stall was cluttered, dirty and in complete disarray. The food was horrible and a waste of calories. It was a wonder that the stall could even attract the ants! 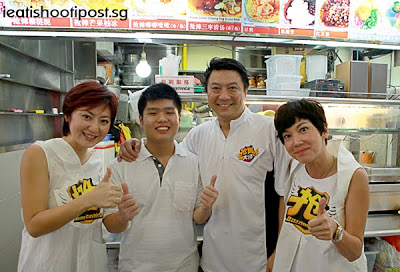 However, Chief Chef Eric Teo had a few ideas up his sleeves. He remarked that Chris was really quick with his hands and even though he is the youngest hawker he had to deal with, he was confident that Chris had what it takes to turn the stall around. So they ended the first shoot on a high note that things can only get better.

But things got worse.

A few days before the training was supposed to start, Chris came down with a fever and a headache. Now most people would just get a cold and get over it in a couple of days, but Chris had to be struck with Meningitis and had to be admitted to hospital. At this stage Kim had to scramble to reorganize for the filming. The diagnosis of Meningitis meant that Chris had to be warded for at least a month, so they had to find someone to take over the training.

Eventually, it was decided that the mother would go for the training under Chef Eric, even though her burns were not completely healed. Thankfully, the training went on smoothly and she was receptive to Chef Eric’s ideas. 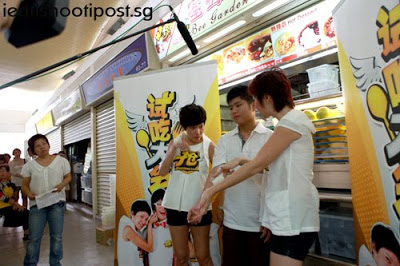 On the day of the 2nd filming when thirty reviewers were invited to vote on the food, Chris was still in hospital. However, he managed to get home leave to support his mother and eventually witness his stall get all thirty votes! Chef Eric had done it again! His four dessert recipes had garnered the coveted Gold Medal for Bee Garden! 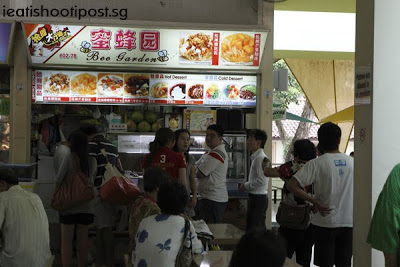 With such a great result and such a heart wrenching story, what happened the next day was quite predictable. The queues at the stall the day after the program aired really shows how much Singaporeans are willing to help a fellow citizen in need.

A lot of credit must be given to Kim and Chef Eric who actually revisited the stall by themselves after Chris was discharged from hospital to give him some extra encouragement and last minute instructions to prepare him for the big day. Again I must say that the whole crew, from the director to the hosts were all very committed to helping the hawkers. This wasn’t just another program for them, this was a program with a real sense of purpose. So I congratulate Mediacorp for producing a series with such a strong social initiative and look forward to Season 3 next year! 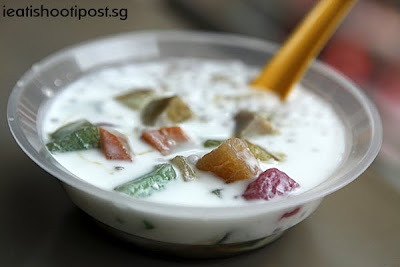 Cactuskit and I visited the stall the first week after the program aired and it was gratifying to see Commonwealth Crescent Food Centre abuzz with activity on a weekday afternoon. Chris and his family were frantically dishing out the four dishes by Chef Eric.

The first was the Bubo Cha Cha which was a far cry from the one we had before. The coconut cream was very balanced and the yam, sweet potato and other colourful bits were all great. Liverpool tried this together with Soundman earlier in the week and also gave their thumbs up. 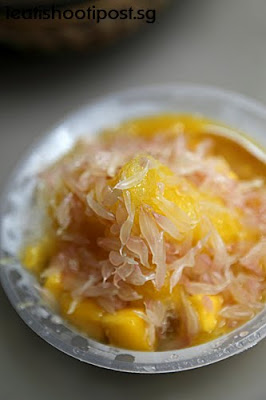 The Mango Pamelo is a dessert that is more often seen at Hong Kong Cafes but now you can find it right here in commonwealth hawker centre. Only fresh mango is used and the combination of mango and pamelo is very refreshing especially on a hot day. 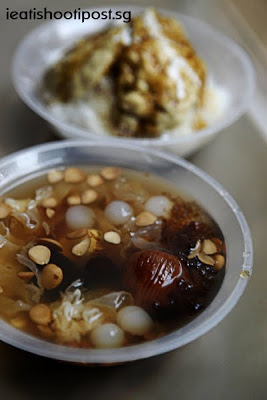 The Cheng Tng was a dish which Bee Garden was once famous for. Chef Eric gave it a bit of a twist by accentuating the Cheng Tng with three different types of dates. This gave the soup a wonderful fragrance which you can detect even before putting a spoonful to your mouth. However we found that it just wasn’t sweet enough that day and suggested that Chris should make it a little sweeter and dilute it on request. 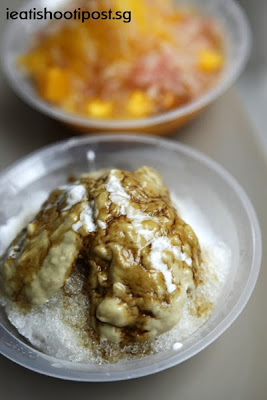 The last dish that Chef Eric came up with was the Durian Penyet which again is not something often found at Hawker Centres. This rich Nonya dish is made of fresh durian with coconut cream and gula melaka, so you can imagine how deadly it could be. We just felt that it should not be eaten with the ice as it dilutes the taste. Best to think of the bed of ice as a means of keeping the Durian Penyet cold.

I hope that the ieat community can also lend their support to Chris and his family. Besides getting a nice dessert to end your meal, you will also be helping Chris to pay off all his medical bills.

If you are wondering what to eat around there, there’s Eng Kee Chicken Wings and Two Chefs which I have blogged before. There is also Ye Olde Laksa just beside Bee Gardens which sells a nice Nonya Laksa and a classic Soup Kambing at the same coffeeshop as Two Chefs. Both of these stalls will appear in the blog soon.

<span style=”font-style: italic;”>Bee Garden
Commonwealth Crescent Food Centre Level 2
right in front of the escalator
The food centre is between Blk 116 and 118 of Commonwealth Crescent
Open from mornings till evenings until sold out.
Closed on Mondays

Some buzzing cashier stalls still fail eventually because the stall holders simply go back to their old habits after the initial buzz. But I don’t think this will be the case for Chris. His 30 year old ice shaver had been giving problems and they had to use the old machine during the first week of sales. Chris had wisely ploughed back his earnings during the first two weeks into a brand new top of the line ice shaver which guarantees that the ice would come out as fine as snow. So his desserts are even better then when they won the gold medal!

Credit should also be given to Sia Huat, for their kind donation of equipment to support Chris!

Featured in the Media
Whose Chilli Crab is it? BlogTV discusses this issue tonight
Next 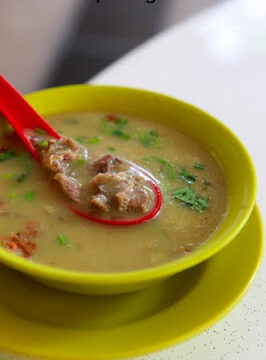 THE MUST TRY LIST
Indian Mutton Soup: Tastes exactly like what I had when I was a kid!