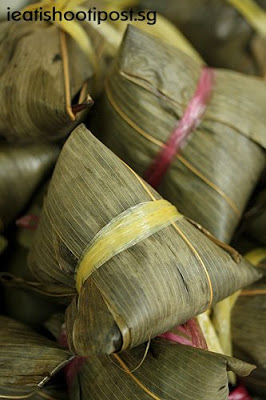 Duan Wu Jie (Rice Dumpling Festival) is just round the corner so its time to talk about Bak Changs. I always try to include something for special festivals when I can, but I am not like a full time SPH journalist who has the luxury of being able to track down the top ten Bak Changs in Singapore and write a full spread about it. (Wouldn’t it be great if I could?) So usually it just depends on what comes my way. It so happens that I bumped into Mimi of D’bun last week and she quickly mentioned that she is making some Char Siew Sio Bak Chang for the upcoming festival. Char Siew Bak Chang? Now that would be interesting, don’t you think?

When I was growing up, mom and my aunties used to come together to make Bak Changs for the festival. Those days, you only got to eat Bak Changs around this time of the year. But somewhere along the line, people started to make them commercially and before long they were available round the year. There was something special about being able to eat Bak Changs only at certain times of the year. You are always looking forward to it. I guess the same thing has happened to things like pineapple tarts and even seasonal fruits like durians. Somehow or other mooncakes seem to have been able to preserve its seasonal status. I wonder why this is so? 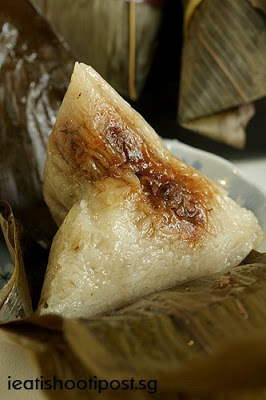 When it comes to Bak Chang, my all time favourite is the Teochew Sang Teng (Double layer) Chang. It’s got the usual fatty pork, chestnuts and mushrooms but what sets it apart is the ball of sweet bean paste wrapped in pork mesentery in it. Till this day I still remember the look of the mesentery (the transparent membrane attached to the intestines) and how it was wrapped around balls of bean paste. The sweetness of the bean paste is a nice contrast to the savoury fatty pork but its something not everyone likes which is why it is not as readily available as the other types of Bak Changs. 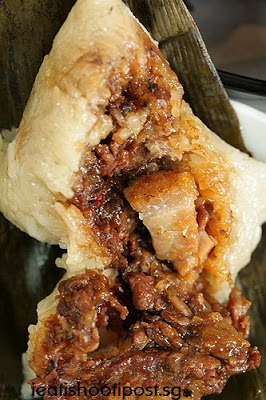 The Char Siew Sio Bak Chang will appeal to those who love Nonya Chang. It is the same Char Siew that they use for their popular Char Siew Pau but for the Bak Chang version, a bit of Ketumbar (coriander seeds) and winter melon is added, so in that way it is similar to a Nonya Chang. The glutinous rice is also prepared by flavouring it with Pandan leaves first. And of course, not forgetting that piece of Sio Bak hidden inside the Bak Chang. It’s like finding that piece of chicken in a curry puff! For someone who also likes Nonya Chang and everything a little sweet, I really liked this one too! 4.25/5 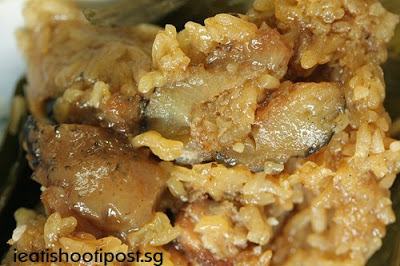 I must confess that for me one of the most enjoyable bits of a Bak Chang is the combination of the slimy pork fat with the starchy glutinous rice. Unfortunately, its not the healthiest thing for one’s heart. What Mimi has done was to use Sea Cucumber (76% protein, 5% fat) as a substitute and I must say that the soft gelatinous sea cucumber really does give you the same sensation as the pork fat but without the guilt. The Sea Cucumber ability to soak up the flavour of the braised pork also means that you could almost mistaken it for pork fat if no one told you about it first.

Sea Cucumber is a Chinese delicacy, so it doesn’t come cheap (mimi using quite a good quality one) and you also have to order it 3 days in advance and they cost $5 each. D’bun also make the normal Hokkien style Bak Changs at $2.50 each which are available over the counter.

Very good bak changs overall. Each grain of glutinous rice is nicely flavoured, soft, moist and gummy. The Char Siew Sio Bak chang is a nice variation of the Nonya Chang with the added charcoal BBQ flavour which I enjoy. For those who like fatty pork but need to look after their waistline, the Sea Cucumber really does make a good low calorie substitute.

Now, where can I get a nice Teochew Sang Teng Chang? 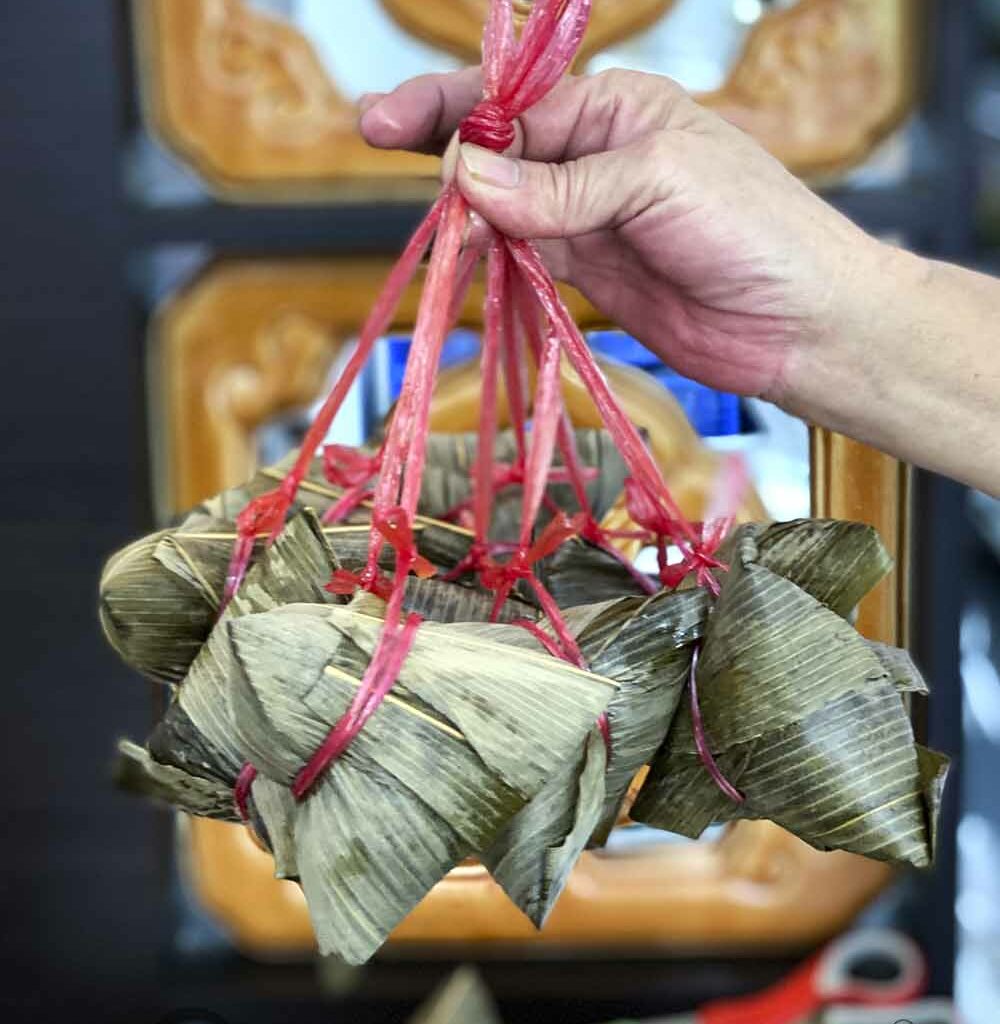 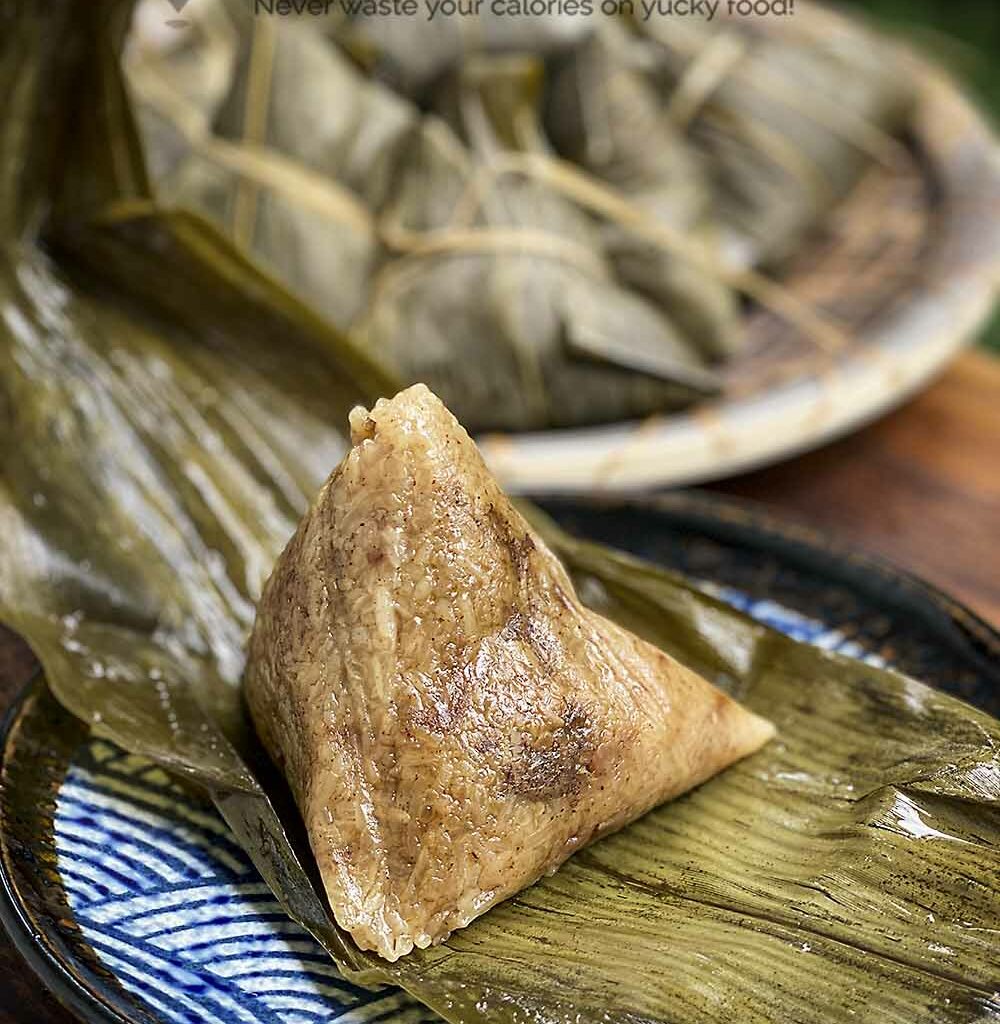 The Polls
Its official! Singaporeans like Singapore Food!
Next 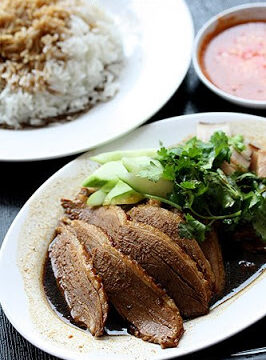