Zespri Kiwifruit: Ever wonder where your food comes from? 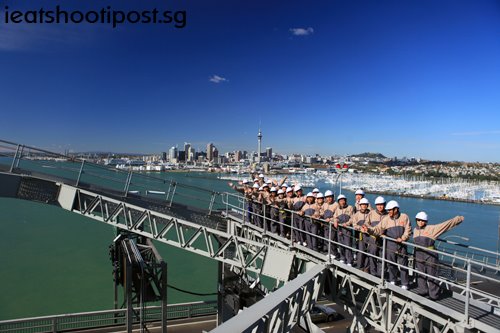 The mention of New Zealand conjures up thoughts of crazy adventure, untouched mountain peaks, bungee jumping and succulent lamp chops. I have always wondered how a country with the same population of Singapore could achieve so much. They have the All Blacks, managed to produce a movie like “The Lord of the Rings”, three nobel laureates and control one third of the world’s dairy trade. Then of course there is Kiwifruit which was developed in New Zealand who now produces 80% of the world’s supply of Kiwifruit.

New Zealand is a country which is still very much unspoilt and the Kiwis have the wisdom to want to keep it that way. Mention all the really fashionable environmentally friendly words such as “sustainability”, “renewable energy”, “organic”, “carbon footprinting” and you can probably tag the word New Zealand at the end of it.

I would be the first to admit that I had never really thought about where my food comes from in the past. I guess like most Singaporeans, food comes from the supermarket. Being a non-agricultural country, most of us grow up not knowing what a farm is except from TV or the farm stays you would do once or twice in your life.

But of late, I have taken an interest in how our food is cultivated and grown. I guess it was partly due to the recent melamine milk scare which really brought the issue of food safety and quality to bare. Yes, we can buy that chicken or fruit from the supermarket shelf, but how nutritious it is really depends on how it has been grown. I recently managed to watch “Hugh’s chicken run” where the differences in farming methods between mass produced chicken verses free ranged chicken are shown graphically. Even though I still buy whatever is on the supermarket shelves, at least now I am starting to consider paying a little more for chicken of a better quality. You can really taste the difference if you are using it for Shabu Shabu or chicken rice.

With fruit and vegetable production there are a few things to consider as well. The obvious things are the overuse of chemical pesticides and genetic modification of fruits. But perhaps what is not really well known is how the growing conditions actually affect the nutritional value of the produce. Let’s take for instance Kiwifruit. Magnesium is one of the trace elements which is found in high concentration in Kiwifruit. It is responsible for energy metabolism, muscle contraction, and nerve impulse transmission, and bone mineralization. Men might want to make sure that they have adequate magnesium in the diet because it is a vasodilator and you need good vasodilatation if you want to be able to father kids. But where do you think the Kiwifruit gets its magnesium from? It’s from the soil of course. So if you have unscrupulous farmers who overfarm the land, the soil is bound to be deficient in minerals and the result is a Kiwifruit that is less than optimal.

Thankfully, the farming in New Zealand is very well regulated. You can see from the slideshow just how organized the farms are. The tall hedges that you see are Canadian pine trees which are grown as a shield for strong winds which may disrupt the Kiwifruit vines. The growers are very much into sustainability and are united in supporting programs like Kiwigreen which is an integrated pest management system that reduces the requirement for artificial inputs and pesticides.

In the past, I never really paid much attention to the brand of Kiwifruit that I bought. Most of the Kiwifruit are unlabelled. So I have ended up buying quite a few Kiwifruits that were better used as paperweights. However, having visited the Kiwifruit farms and the packhouses. I can safely say that when I pick up a Kiwifruit with the Zespri label on it, I am assured that I am getting the very best Kiwifruit in the world. 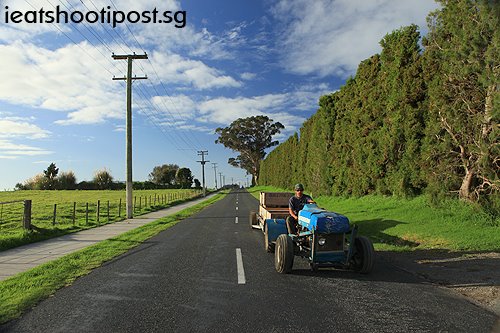 As a company, Zespri controls the whole supply chain of the Kiwifruit with the exception of the growers who basically grow their Kiwifruit according to their strict guidelines. Besides having pristine conditions for growing the fruit, it is interesting to note that when they grade their Kiwifruit in the packhouses, they only select the best Kiwifruits to be exported. Most of the lesser grade Kiwifruits are sold at home or fed to the cows (really, no kidding). For the Singapore market, they have Kiwifruit in two different sizes. The smaller ones are sold at the big retailers like Cold Storage and Fairprice while the Mom and Pop shops usually sell the larger ones. So, if you find that Kiwifruit at the supermarkets are cheaper than the ones at the Mom and Pop shops, there is a good reason for it. 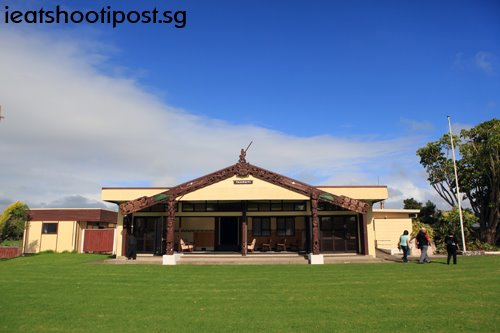 Another interesting note is that our Kiwifruit comes from one specific packhouse which are managed by the indigenous Maori people. As you know, the indigenous people of many countries in the world were often displaced when new migrants take over the country. It seems to me that New Zealand is one country where the indigenous affairs are quite well managed.

During our trip, we were invited to the Wharenui (meeting house) to meet the elders of the Maori community who own the farms that grow the Kiwifruit. During the half hour ceremony, lots of things were said in Maori where there was no translation. So we can only gather that they were somehow telling us about their history and welcoming us into their community. It was only after we rubbed noses that I found out that the Maoris of the past were cannibals who would eat the heart of their enemies! Anyway, the meeting was a way of introducing the Maori kids to the people (us) who were buying their Kiwifruit and supporting their community. 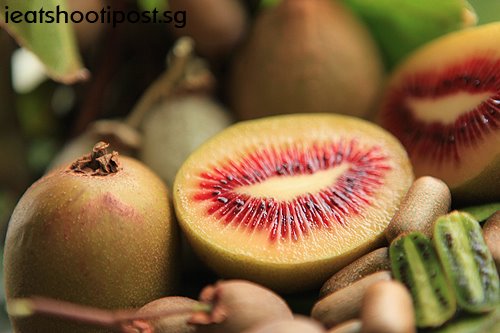 The red Kiwifruit might hit our shelves in a few years

There are actually many varieties of Kiwifruit. The familiar one which we all know of was the Hayward cultivar which was developed in New Zealand in the 1920’s. But Kiwifruit can come in all shapes and sizes, some are hairy, others are not. (Like humans really and incidentally, I wonder about the Gold Kiwifruit. Is it just a coincidence that they are yellow on the inside, not hairy on the outside and its scientific name is Actinidia Chinensis?). The Zespri Gold Kiwifruit was a cultivar which was developed by Zespri which is why they are the only brand that offer the gold variety. It was basically developed to suit the Asian palate who prefer fruits that are sweeter, typical of tropical fruits. One of the possible cultivars which might make it to our supermarkets shelves in the next few years is this red colour one which is currently being developed by the Zespri scientists. The flavour is even smoother than gold, but it would be a big hit with the Pastry Chefs as it is a beautiful fruit to decorate with. 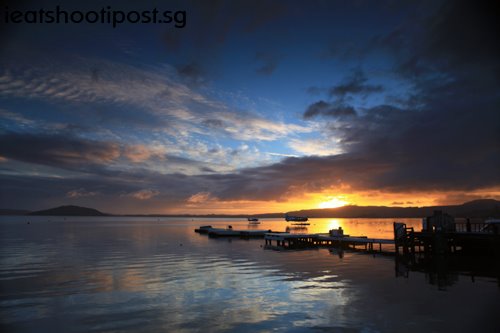 As the world grapples with the problem of food shortage, farmers worldwide need to be able find the balance between producing food in greater quantities but at the same time not compromising on the quality and safety. Unfortunately, it doesn’t always work that way. So, as consumers we do need to be a little more aware about the source of our food when we shop.

Fortunately, there are countries like New Zealand who are growing safe, sustainable and nutritious produce for the world. So, the next time you pick up a Kiwifruit with the Zespri Label on it, just remember that there is a difference in quality and taste and that you are also paying for a sustainable future and equitable farming methods.

Click here to read about the nutrional value of Kiwifruit

Here is a very recent clip from Channel News Asia highlighting the issues of food safety, sustainability and how Kiwifruit is being grown in New Zealand. 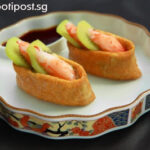 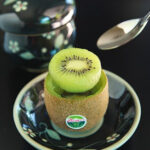 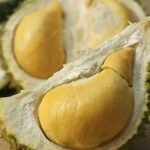 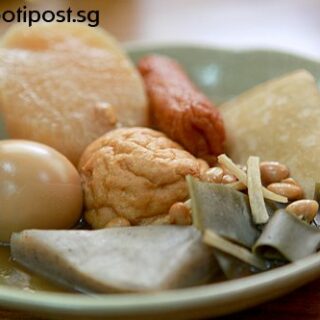 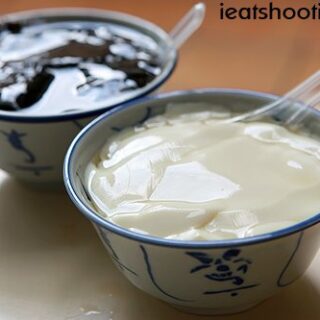