There are two types of crab bee hoon.  The soupy type with the thick bee hoon and the dry type with the thin bee hoon.  I personally prefer the dry type because I really enjoy a good wok hei.   The gold standard for this type of crab bee hoon is arguably Sin Huat.  But do note that I used the word “arguably”  because whenever you mention Sin Huat, you will get plenty of arguable responses.  I have been to Sin Huat on a few occasion and I can honestly say that on a good day, Danny’s crab bee hoon is the epitome of what the dish is supposed to be.  However, my last visit just happened to be on a bad day, so the crab bee hoon was only a shade of what it was.  But, the main complaint that I often get to hear about is not the quality of the dish but quality of the service.  Danny happens to be one of these “Food Nazis” who would come to your table and take your orders himself, which can be quite intimidating to the unwary first timer as he would often suggest you take a few of his other dishes like the frog legs and scallops.  They are all very good, but you seldom get away with just one order of crab bee hoon and a small bill.  I guess that is why a lot of people have such a love-hate relationship with Sin Huat. I haven’t really found a good alternative to Sin Huat until I met Chef Mac.  Two things immediately impressed me about Long Ji Zi Char.  Firstly,  this is one of those Zi Char places where the owner is also the chef, just like Sin Huat, Sik Bao Sin and Keng Eng Kee.   Such places usually serve up better food than if the owner hires a chef from Malaysia to do the cooking.  At least, you know that the food is going to be consistent as the chef is less likely to change.  The second thing was when I caught Chef tossing the bee hoon in  the wok.  He really gives the bee hoon a good “wok out” such that the resulting bee hoon becomes wiry and brown, thoroughly infused with the smokey wok aroma. The resulting crab bee hoon is very good, especially when you consider that Chef Mac resists using MSG or chicken powder in his cooking.  You can really taste the natural sweetness of the crab which is soaked up by the smokey bee hoon to produce a mouthful of unbridled pleasure.

I only have two small complaints.  The first is the crab on that day wasn’t as solid as I would have liked.  The flesh was firm and sweet but the claws were only 2/3 full.  However, I do realize that it is not easy to guarantee a solid crab nowadays as it is highly dependent on the suppliers and with higher demand coming from China, it will only get worse as more Sri Lankan crabs get diverted to the the more lucrative Chinese market.  Secondly, I feel that the umami level can be pushed up a little with the addition of a good stock.  Then it will really be on par with Sin Huat on a good day. At the moment it is close enough to be a really good alternative.  4.5/5

The fermented pork belly is really excellent.  It was the first dish that came out and so by the time we found out that it went really well with the crab bee hoon, there was only a few pieces left!  So, make sure you order a plate to go with the crab bee hoon!  The belly is well marinated such that the nam yu (fermented bean curd) has really penetrated into the pork.  My only complaint is that the skin is chewy instead of crisp.  I thought it would have been better if chef just removed it prior to frying.  But really, a mouthful of bee hoon with a slice of the fermented pork is a choir of angels singing the Hallelujah chorus in your mouth!  4.25/5 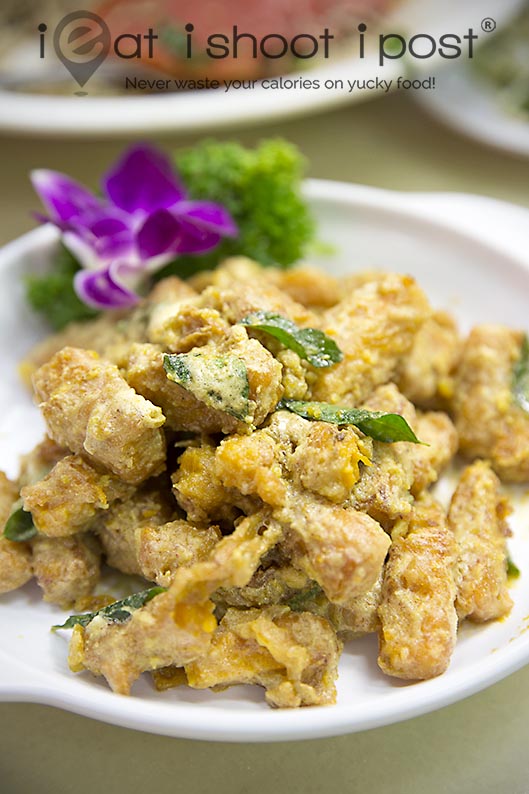 Chef Mac is quite innovative and tries to put his personal touch on all his dishes.  The salted egg pumpkin is really worth a few calories.  The pumpkin is first braised till soft with a bit of sugar and then deep fried and smothered with salted egg sauce.  The sweet and salty combination goes really well with rice and provides a nice balance to the other salty, savory dishes!  4.25/5

I really like the fact that all the dishes are given the “wok-out” by Chef Mac.  Even the Jing Long chye (Green Dragon) is nicely fried so that it has a nice smokey aroma.  This is the first time I have had this vegetable (from Cameron Highlands) fried together with bean sprouts and I must say that it really works!  The beansprouts give it a hint of sweetness and a nice complementary crispness in texture.  4.25/5

My kids like the pumpkin sauce and cereal combination.  Personally, the thought that the dish was a good idea.  However, the homemade egg tofu was too firm and not silky enough and the pumpkin lacks a roundness in flavour due to the lack of savoriness.  (Remember Chef does not use MSG)  This is the kind of thing that would really benefit from a bit of natural umami, like a good stock made from Jing Hua ham and dried scallops, but we all have to remember that this is a modest Zi Char that is trying to keep prices at a level that is affordable for most Singaporeans!   3.75/5

Chef Mac hails from KL and came out to work in Singapore in 1997.  He is probably best known for his stint at the now defunct de Classic Golden Spoon where his Crab Bee Hoon was quite well known.  When the restaurant closed due to management issues, he opened his own da pai dang in Bukit Merah View hawker centre before moving to his present location in October 2014.  As I have already mentioned earlier, I respect his determination to cook all the dishes himself.  That means that you may have to wait a little longer for your food, but at least you can smell the wok hei when your dishes hit the table.  The other thing that I have to emphasize again is the fact that he doesn’t use MSG in his food, so when you eat it, you may feel that it lacks a little something.  It’s not a huge deficit and his food is still very tasty, but it’s just something to bear in mind when you are eating so that you will not be over critical if you feel that food lacks “something”.

Excellent place for a Cze Char meal.  This is now my go-to place when I feel like a Crab Bee Hoon!  Chef Mac cooks all the dishes himself and infuses his dishes with a nice wok hei.  It is also a good place to go if you are sensitive to MSG as he doesn’t use it in his kitchen.   So go gather your family and friends and head down to Long Ji for a Mac Attack!

Every time I passed by this stall (I stay nearby), I’ll see all the tables there will have the Crab Bee Hoon. And when I get home, I’ll tell my wife – “Seems like the ‘new’ restaurant [previously a chap cai stall] is good for Crab Bee Hoon. Let’s try it.”

Restaurant has closed. Last day of operation was 31 March 2016.

They have moved to 51 Havelock Road to the other branch. Please call the boss as he might not be around all the time.

I spoke to Mac, he said he is still looking for another location.

Hi, do you know if Chef Mac has found a new location yet? And does he still make the amazing Crab Bee Hoon?

Yes, the new address has been updated in the blog

Been following Leslie food recommendation for a while but this store is a big let down. Jus had dinner there on 12mar ’17.
Food is sub par, and the place is full of flyers and insects.
The worst is this store is dishonest. Told us the male crab is around $60, but when bill came was a female crab with $72 price tag. Checked with them and staff still rude and say their crabs were 1.2kg only. Also feedback that there is a lot of flying insects. Still insult me and say we were lucky never come during raining days else would have been more. Such f up store dun think I will ever visit again, unless they pay me for dining there.

Wok hei was good !
Only complains I have was that I met a cockroach at my table.
It crawled up on me and I was freaked out!
I had to sweep it off me as it was on my skirt!
Food is good, but I won’t go back for the cockroach.
Those who are ok, like the Chef who responded. He said (in Chinese) : maybe it’s the pest guy who sprayed this morning. It is a regulation that we get it sprayed once a month. Why did they not inform of such “experience” for where I sat?

Go if you don’t mind a little cockroach time.

You ever seen cockroach in your own home?

Thanks for deleting my post. I know good comments are only welcome. Yes, cockroach is acceptable in your standard. Even if they crawl on you during your meal.
Thanks Leslie. 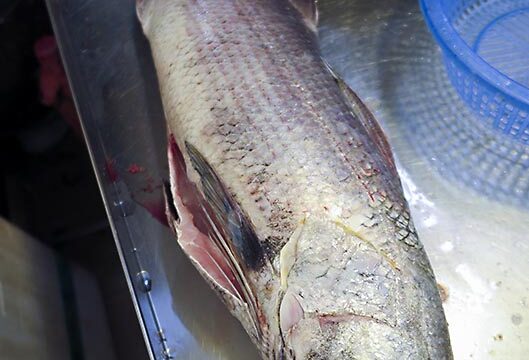 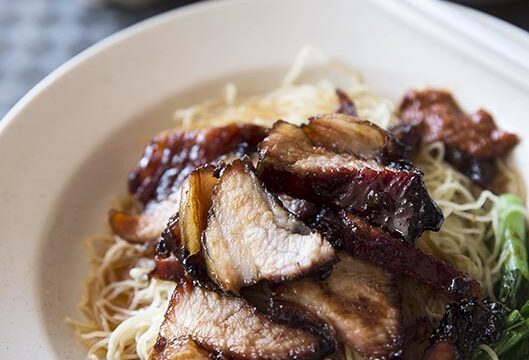