Wolfgang’s Steakhouse: Finally, a Steakhouse with a proper aging room! With the arrival of Wolfgang’s steakhouse, Singapore has finally got an American Steakhouse with a proper aging room!

The concept of a traditional American Steakhouse is not new to Singaporeans.  Morton’s has been here for two decades already.  But the concept of aged beef has only really gotten onto the local food scene since Skirt set up an aging cabinet back in 2012.   Since then, there has been several beef suppliers who have gone into beef aging and spurts of restaurants trying to age their own beef on a limited scale. 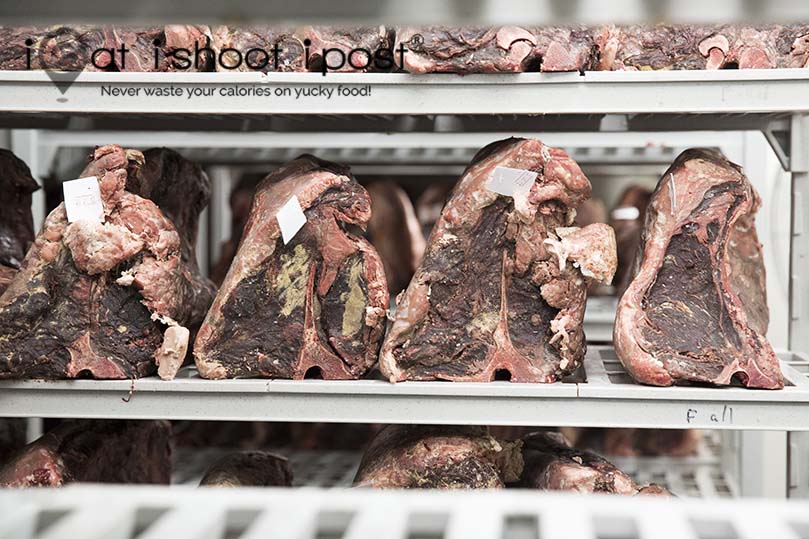 With the arrival of Wolfgang’s steakhouse, Singapore has reached another steak milestone.  It is the only steakhouse here with a walk-in aging room that ages the meat for its own menu.

Unlike steakhouses like CUT which serves beef from all over the world, Wolfgang only serves USDA prime beef.  The meat arrives from the US within a few days of slaughter and is placed in the aging room for an average of 28 days before it is ready to be served. During this time, the beef loses excess moisture resulting in a concentration of flavour.  In addition, enzymes present in the meat break down the muscle fibres into flavourful amino acids.  The enzymes also chew through tough connective tissues which result in a steak that is more tender!

Not everyone will appreciate the flavour of aged beef, especially those who don’t like blue cheese, because the beef takes on a musky, yeasty flavour which is especially pronounced near the surface where the fungus grows.  The longer the beef is aged, the more pronounced the funk.  The longest I have tasted was 55 days at David Burke’s Steakhouse in Chicago, but I feel longer is not necessarily better.  Over the years, I have decided that those steaks that have been aged for 30-40 days suit me the best.  These steaks have good flavour without too much moisture loss so that they are still nice and juicy. 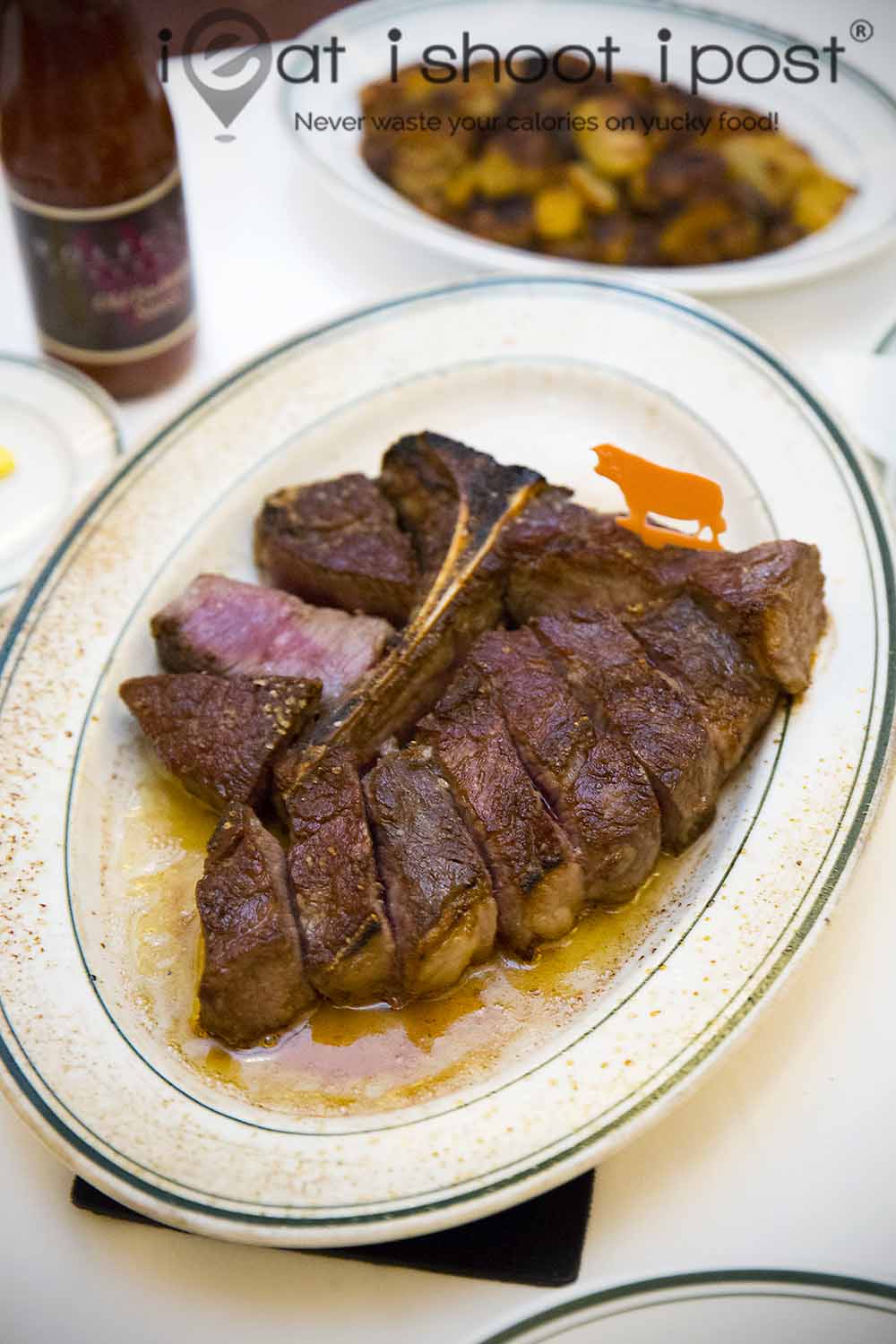 One of the marks of a good steakhouse is the mesmerizing aroma of sizzling beef luring you into the restaurant like a squid to the light.  You will experience this when the lift door opens at level two of the hotel.  That smell alone is worth a visit.  The aroma is so thick that you could just order a plate of fries and your colleagues will still think that you have been eating steak when you get back to the office!

The steaks are served in the style made famous by the legendary Peter Luger’s in New York  where the meat is pre-sliced and arrives in a sizzling hot steak dish.  Wolfgang Zweiner was the restaurant manager at Peter Luger’s for over four decades which explains the similarity in style.  The meat is cooked in two stages.  It is first grilled in a 900°C broiler for a few minutes before it is left to rest.  When it is ready to be served, it is sliced and the whole dish is placed  under the broiler to get it sizzling hot.  It is served in a bubbling pool of butter which drains to one side as the dish is placed with one side elevated with a saucer.

The meat is superb.  It has that funky aged beef flavour that I haven’t tasted in Singapore before.  Some of our local beef suppliers have started their own aging facilities in recent years, but I have yet to come across a steak that has developed the same yeasty flavour.

That is not to say that it is the perfect steak.  I would have liked mine a little more charred and I found that the steak wasn’t as perfectly cooked as it should be. Parts of my porterhouse steak was a little too well done while there are other parts which was a little too rare.  I think this has to do with their cooking process which I hope will improve when the new team of chefs become more seasoned.   4.25/5

The starters, sides and desserts are typical of an American steakhouse.  So you can expect dishes like prawn cocktail and crab cakes for starters, creamed spinach and potato chips for sides and cheese and key lime pies for desserts.  They are good but they won’t steal the limelight from the steaks.  If you have fond memories of visiting an American steakhouse as a kid, you will enjoy the nostalgia.  However, if you are looking for something more modern, then there is really nothing to write home about.

This is the classic American steakhouse serving top quality USDA prime beef steaks aged for 28 days in their own aging room. The quality of the aged beef is excellent.  However,  the accompanying sides and desserts will only appeal to those looking for nostalgia.

Disclosure
This was a media tasting.  This means that the food was provided for free with no obligations to write.  No fees were paid for the review. 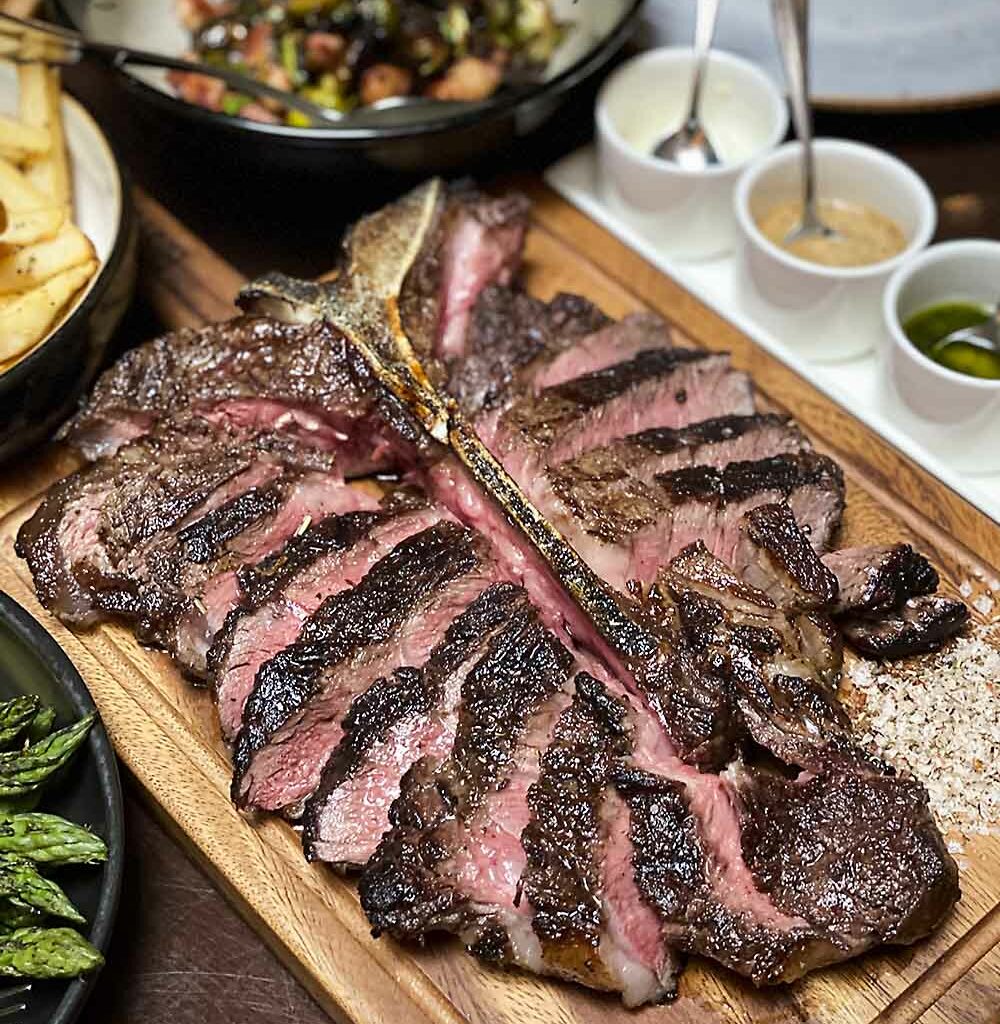 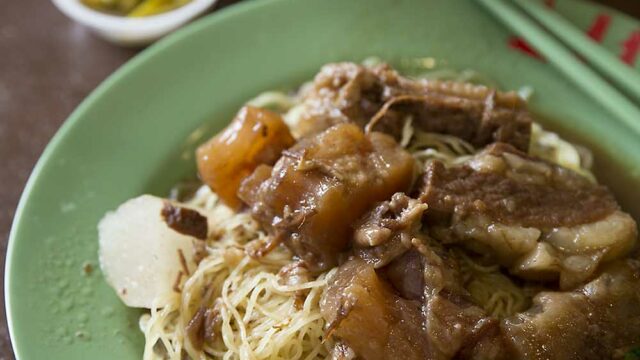 THE MUST TRY LIST
Master Tang: Beef Brisket and Chicken Feet Heaven!
Next