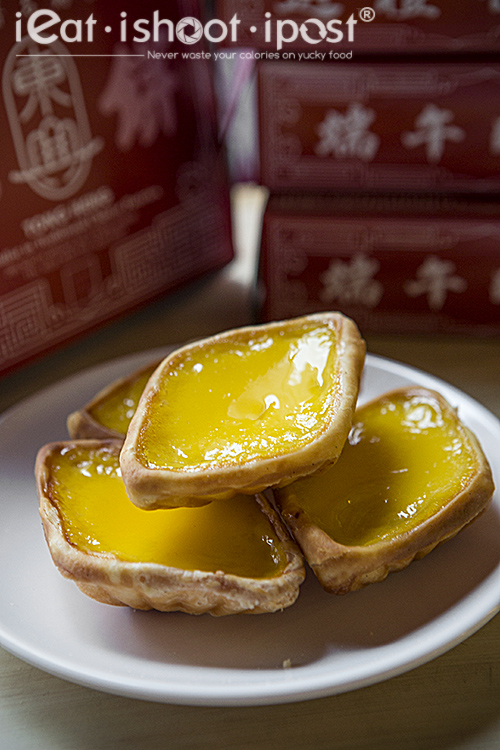 When you talk about egg tarts in Singapore, most people will point you to Tong Heng Confectionery for their iconic pastry. In our recent facebook survey, it comfortably garnered 47 out of 90 votes which is quite a feat considering the next runner up only had less than 10 votes!

I think Tong Heng’s popularity is a combination of their long history in the business as well as the character of their uniquely shaped egg tarts which appeal to a lot of people on the subconscious level. I say subconscious because although a lot of people like the egg tarts, it is not easy to say just why it is so appealing. Is it the shape? The texture? The taste? Or is it simply nostalgia as it is something you grew up eating?

To find out, I met up with Wai Keong, a fourth generation family member of the shop who also happens to be one of my makan kakis.

Tong Heng Confectionery is one of the oldest confectioneries in Singapore and it specializes in Cantonese pastries. It is ironic though, that almost all their pastries are traditionally Cantonese except for their egg tarts which has its roots from either the British (Hong Kong) or Portuguese (Macau).

According to Wai Keong, Tong Heng is 88 years old this year. It was 88 last year and will be 88 next year. The truth is no one really knows. However, we do know that his great grandfather Fong Chee Heng arrived in Singapore around 1901 as a coolie and eventually saved up enough to start his pushcart kopi business 1920’s. By the 1930’s, he opened his own coffeeshop at 33, Smith Street selling kopi and kaya toast as well as other homemade pastries.

The egg tart has taken on various shapes, but it was not until the 1960’s that it finally settled on the iconic diamond shaped form. At the time, the egg tarts were just another item that was served at the coffeeshop. It was far from being the pastry that would eventually come to be identified with Tong Heng. The breakthrough come in the late 70’s when Wai Keong’s grandfather left the coffeeshop for the day. His daughter (Wai Keong’s aunt) took the opportunity to erect a glass showcase in front of the coffeeshop and started displaying the egg tarts. It had to be done when grandfather was away because he would never have approved it. That was the day that Tong Heng morphed from a coffeeshop to a confectionery! People started lining up outside the coffeeshop for their egg tarts and very soon it was the talk of the town. 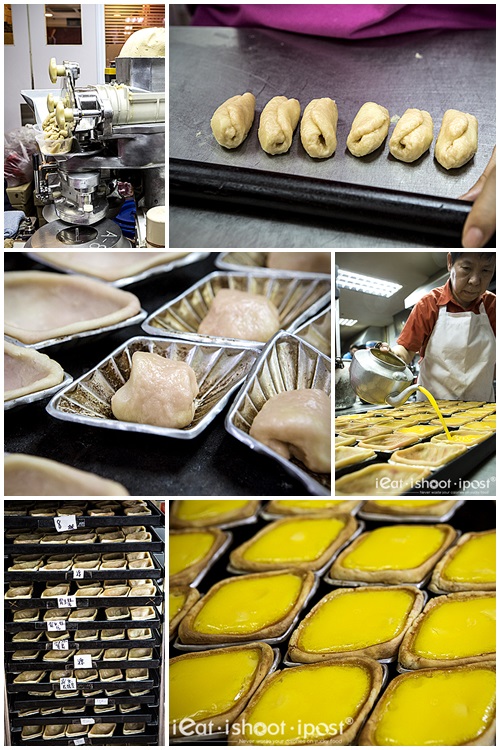 So what makes Tong Heng’s egg tarts so appealing? Well, there are several factors.

One thing you will notice about the egg tart is that their pastry base is not easy to define. It is neither puff pastry nor a shortcrust pastry but a combination of both. The dough starts off as a traditional two part flaky pastry that is typical for chinese biscuits like Tau Sar Piah. This flaky dough is made by layering a lard based dough over a water based dough which results in the familiar flaky pastry that is unique to Chinese style biscuits. This dough is then pressed onto the diamond shaped mold ensuring that the base is as thin as possible while maintaining a nice rim of pastry at the edge to ensure that the egg filling does not spill out. This second step essentially turns the dough into a unique hybrid of shortcrust and flaky pastry!

The diamond shape also plays a big role in its appeal. Because of its shape, most people will pick up the pastry in their hands with their thumb and three fingers and the most natural way of eating the tart would be to start with the sharper edge first and ending with the opposite edge. This means that you start and end with the nice crunch of the pastry and enjoy the wobbly custard and thin base in between! 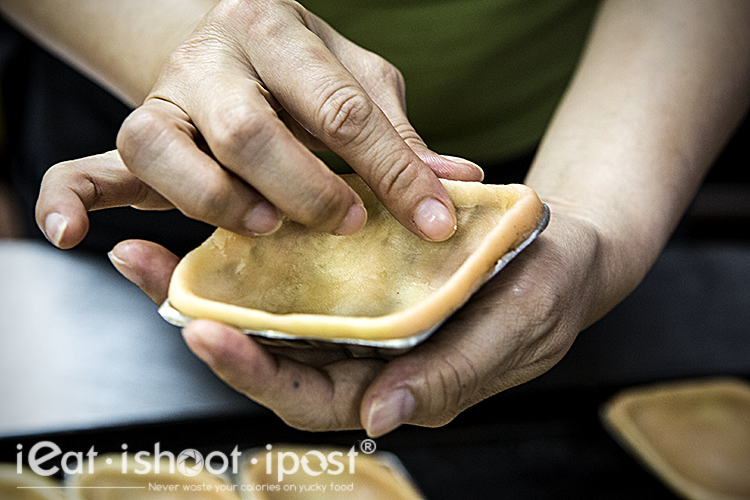 Now to the egg custard. Tong Heng has a very simple philosophy for the egg custard and that is to be able to taste fresh eggs when you eat the tart. To do this, they work with a local egg farm who have designated a section of their farm specially to produce eggs for their egg tarts. These chickens are fed with a special, all natural feed and must be not come from hens which are too old. They also tell me that the eggs must be cracked within 48 hours from the time they are laid since the freshness of the egg will determine the texture of the custard.

They are so meticulous about the egg custard that the task of breaking the eggs can only be done by one particular aunt. It is said that she has handled so many eggs that she knows how old the hen is just by feeling the egg. I was very intrigued by this, so I asked the aunt what was the secret.

“Its no secret lah”, she told me. “The older the chicken, the bigger the eggs!”

The reason the eggs cannot come from older hens is very simple. It has more to do with the size of the eggs than the quality. Being a traditional confectionery, their recipe for the egg custard is based on the number of eggs per pot of sugar syrup. So the size of the egg has to be consistently between 50 to 55g. Old mother hen eggs may be 60-60g in which case the consistency of the egg custard would be more firm and long time customers will start complaining!

The last thing you need to know about the custard is that it is made only with three ingredients, viz eggs, water and sugar. Unlike a lot of other places who may use thickeners like custard powder or corn flour, theirs is a pure egg custard. So what you taste is essentially sweetened eggs! This type of egg custard is very similar to Chawanmushi which is essentially a custard of beaten eggs in dashi in the proportion of 1 part egg to 4 parts water. 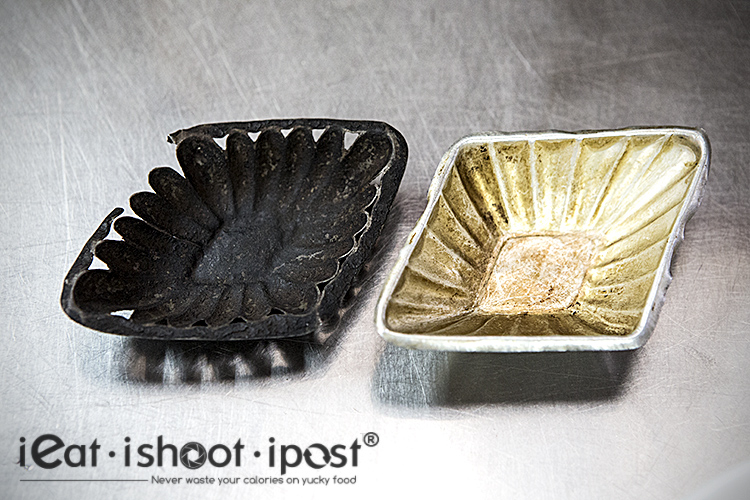 The Egg Tarts at Tong Heng are indeed very unique and its no wonder that it is still the most popular egg tarts amongst our readers! This is a real Singapore institution which, thankfully, will be around for at least another generation! 4.5/5 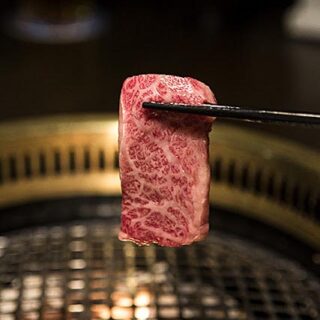 Great for Families
Gyu Kaku Anchorpoint: A Place for a Family Yakiniku
Next 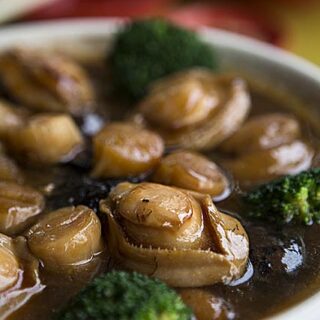