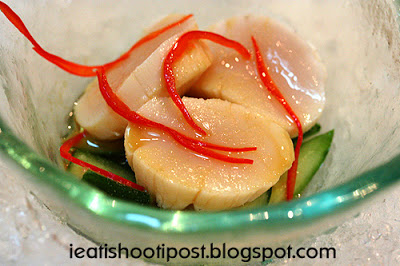 My wife always raved about the Lobster Noodles that she ate in London and claimed that there is nowhere else in the world with better Lobster Noodles. Just when I was wallowing in self-pity about the fact that there is no opportunity in the foreseeable future for me to travel to London, I stumbled upon Chubby Hubby’s picture of this elusive dish! I was freed from my psychological mire having a renewed ambition! Ah Lobster Noodles! I shall hunt you by air, I shall hunt you by sea till I have your hemi-exoskeleton sitting on my platter! (Sorry, a bit melodramatic, but it is really one of those “things to eat before I die” items in the same list as Matsuzaka Beef!)

To get to the Lobster noodles, one has to first go through a rigorous obstacle course known as the Degustation Menu, since the Lobster Noodles is part of a set meal! The first obstacle er…. course was the scallops. Now I really don’t know what is so special about these Hokkaido scallops. They were tender and sweet but tasted much like any other scallops to me. I usually don’t like sourish stuff so the vinaigrette did not agree with me. 3.5 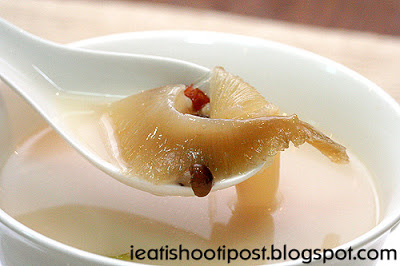 This one I quite like. Actually Shark Bone is a misnomer since Sharks are cartilaginous fish ie they have no bones. Cartilage consists of collagen (The stuff they try to sell you to get rid of celluloid). When they boil the cartilage, it breaks down to gelatine which gives the soup its sticky consistency. Quite agreeable. The only thing I don’t understand whenever I eat sharksfin is where the small little fins (shown in pic) actually come from? 4/5 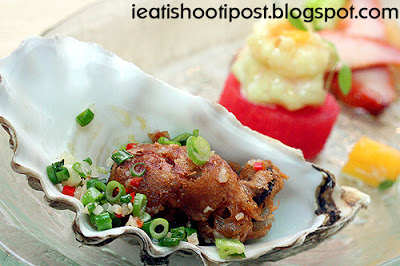 Oyster afficianados will cringe when they see this wok fried oyster, but I have always preferred my oyster either deep fried or smothered with melted cheese and bacon. Yah Yah, to each his own. A good deep fried oyster is crunchy on the outside and creamy on the inside, ooooohh so shiok! 4.25/5 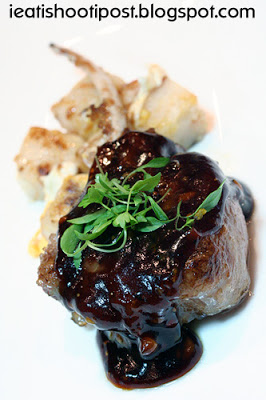 You really can’t go wrong with Lamb cutlet with Honey Soy. Though the Lamb was done medium well, it was still tender and juicy. I felt the the Honey Soy had a tinge too much cornstarch. The consistency was like the sticky potato starch in an Orh Luak (Oyster Omelette). It would have done better if it was less viscous. The accompanying carrot cake was an unlikely combination. I liked both on its own, but I felt there was no synergy between the two. 4/5 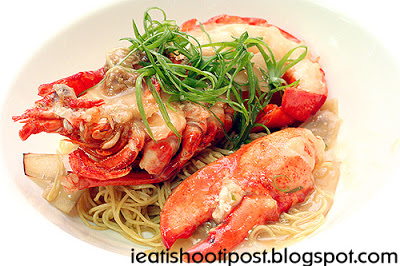 At last! I have reached the climax of my Degustation! Be still my trembling taste buds.

Before I get to the verdict, let me just say that a lobster is only considered a true lobster if it comes with pincers. (like the one shown above) The Phuket Lobster and the Rock Lobsters we get from Australia are really crayfish, not true lobsters. But of course, no one is going to pay top dollar for a crayfish right? So the smart exporters of seafood devised a clever way of making money by exporting lobster tail (Actually the fleshy bit is the abdomen, only the fin like bit is the actual tail) without the head and claws. Think about it, if you are selling true lobsters, would you just sell the tail without the claws?

Ok I don’t want to continue to keep you in suspense like how Gurmit Singh does in Singapore idol. The Lobster Noodles were ….. good but not as mind bogglingly fantastic as I had expected. The noodles lacked that sweet crustacean taste that I had so eagerly anticipated. Though the flesh of the lobster was done quite well, it just did not hit the mark for me. 4/5

I guess my expectations had been quite high after I had tasted really awesome Stir Fried Rock Lobsters in Sydney (Remember they are not true lobsters and are supposed to taste inferior?) Guess I still have to plan a trip to London for Lobster noodles! 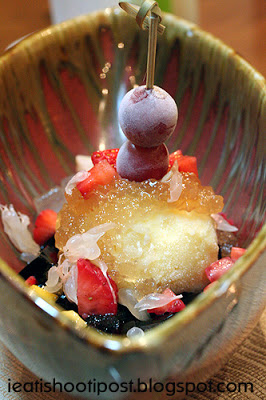 Despite the slight disappointment with the lobster noodles, the overall experience at the Majestic was pretty good. Maybe it was just my taste buds that day, or maybe because it wasn’t Chef Yong who prepared the dish himself. I know of people who go there regularly for the Lobster Noodles and rave about it, so I guess you might have to try it yourself. It is still cheaper then an airticket to London.

Apologies:
I don’t go out of my way to eat Shark’s fin. This was part of a set menu and I was an invited guest. There have been readers who are concerned for the welfare of the sharks and who have written in concerning this environmental issue. However, this dish was made with shark cartilage as well as the fins, so we are actually using the whole fish. I think the main concern amongst the environmentalists are that the fins of the sharks are cut off and the fish left to die a slow death. So please bear this in mind if you are considering ordering Shark’s fins. 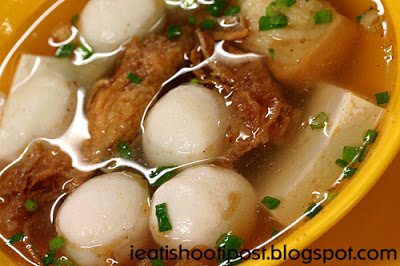 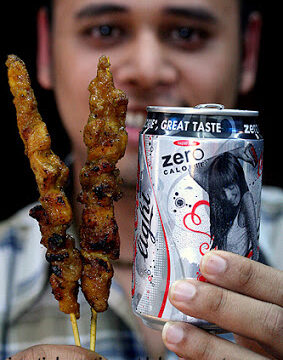