Seng Kee Bak Chor Mee: Its like visiting your Uncle who happens to be a great cook! 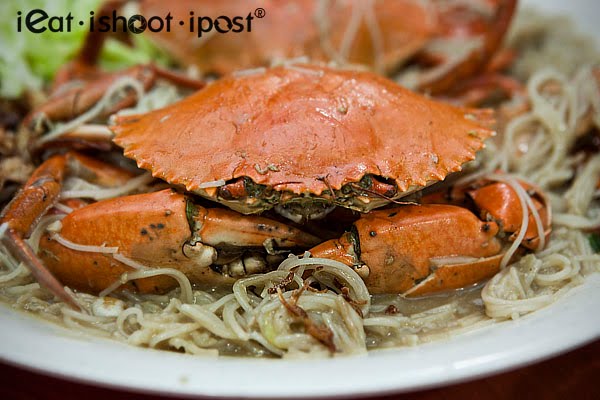 Our Seng Kee uncle is busy trying to build up his Cze Char business in the evenings and has been experiementing with different dishes to put on the Cze Char menu. The kakis have been patronising the Crab Bee Hoon over the last month or so and I have personally been there twice for the Crab Bee Hoon already. In the previous post, I already felt the Crab Bee Hoon was very good, but this time round the flavours were even better! I think he almost perfected the recipe for this dish and it is partly due to our ieat community going down to give it a try and offering our feedback. 4.5/5

He serves two versions. We felt that the dry version was simply a more concentrated version compared to the soup and so we would recommend the dry over the soup version. However, the soup version is not bad, it just needs a bit of tweaking. Our kakis suggested he used the thick bee hoon rather than the thin one so that the two dishes are more distinct. 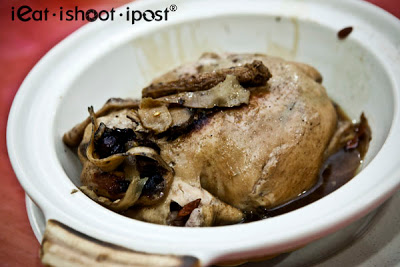 Both Rockett girl and I liked his version of herbal chicken but Cactuskit told us that though it is good, there are still better ones elsewhere. I would be happy to order it again though as I felt that the flavours were well balanced and I like the sweetness in the herbs which lingers at the back of the tongue. We teochews would describe it as “Karm Karm”. 4/5 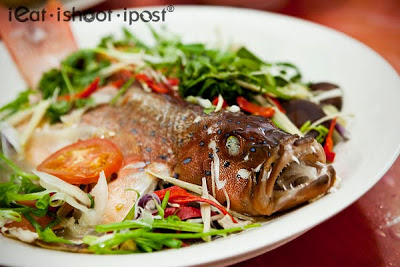 Being Teochew, his steamed fish was excellent. He managed to procure what he called a “Juk Bee Gao” which roughly translates to “Glutinous Rice Grouper” because of the pattern of blue dots on the body. The fish was expertly done in Teochew style and surprisingly good. 4.5/5 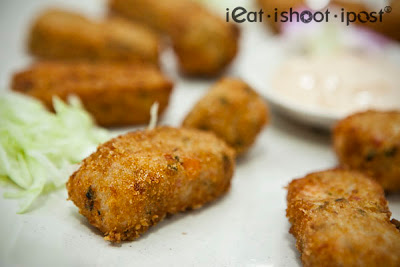 His crab croquettes were actually very good. They were all handmade with fresh crab meat. The problem that night was that he did not have the appropriate plate for it so there were a few pieces of croquettes spread around a rather large plate which made it look quite uninteresting. Apart from that, I would be quite happy eating a handful of these. 4.25/5 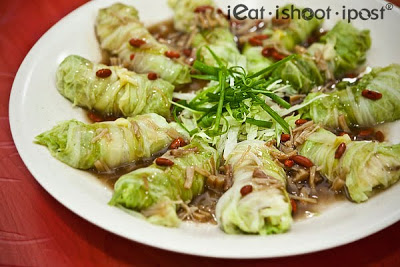 He produced this dish of fish meat which has been wrapped in cabbage rolls in his own special conpoy sauce. This is again an experimental dish which I thought had great flavour but the use of “Peh Chye” meant that the leaves were a little fibrous. I would have preferred and less fibrous leaf like cabbage. Not bad, but not something I was order unless he tells me the has tweaked it. 3.5/5

Having dinner at Seng Kee is like visiting an uncle at his home where he would cook up some of his favourite dishes for you. We ordered our meal a few days beforehand, so that the uncle can get ready the ingredients. There were some misses which I did not highlight, like his cuppucino pork ribs but by and large he is passionate about his food and he has got a good culinary sense, so a meal there would be full of surprises, mostly good ones.

The crab bee hoon is on the menu. However, the rest of the menu has to be ordered 2 days in advance!

They are now bringing in larger crabs, so it is no longer $28 per dish, but it is charged by weight. So do ask about the price before ordering.

Please organize your menu before you go! 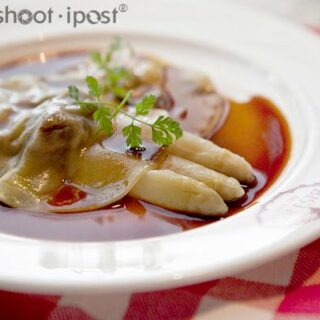 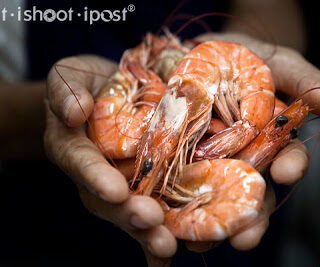