With Glaxo, Smith and Kline 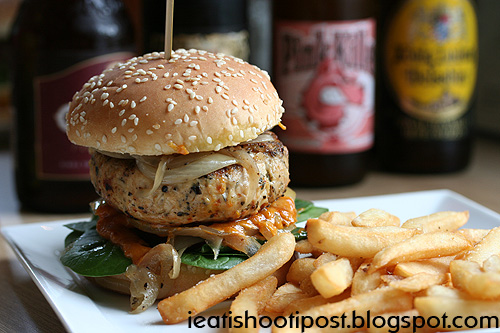 Burgers — They hold a special place in my heart (And I don’t mean the cholesterol that has been deposited in the arteries) as it does in many a foodie. The very thought of eating a burger just conjures up childhood memories of eating this delectable sandwich in clubs, Swenson’s, A&W and MacDonald’s. Yes, back in the days when you only get to go to MacDonald’s when you scored well on your exams — the Big Mac was quite a treat then.

Just why does the Hamburger have such a aura of desire around it? It quite simply is the King of the sandwiches just as the Durian is the King of the fruits. Just what draws (predominantly) men to a hamburger? How does a thick slab of minced meat cuddled by big soft round buns resonate so well with the male machismo? Is it because it is simple to cook, that husbands would occasionally give their wives a break, fire up the BBQ and pretend to be Neanderthal Chefs? Or is it simply because a good burger is just darn good to eat?

Whatever the case may be, when I heard that Wilin from Wild Rocket had opened a Burger Restaurant, I just had to check it out. 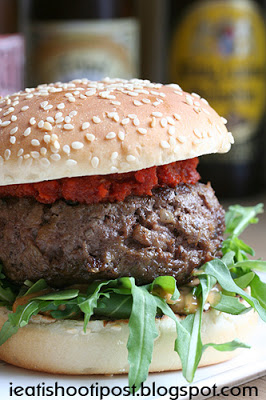 Now the idea of a Gourmet Burger Restaurant is not new. I think most people still remember the ill fated Uberburger and their $101 Wagyu Burger. Well, if you want to make people pay $101 for a Burger, it better be darn good. So opening another Gourmet Burger joint so soon after the demise of Uberburger must be quite a calculated risk. Whatever the case may be, I am just glad that Singapore still has a restaurant where the people simply live and breathe Burgers.

Relish has quite a list of gourmet burgers to choose from so I decided that I would just try a selection. The curry chicken burger was first out of the kitchen. The pattie was made from chopped chicken spiced with curry leaves, chilli and other bits of these and that and it was accompanied by sauteed onions and a curried mayonnaise. It was interesting, but pretty mild if you are gunning for a robust Cowboy meal. The whole thing had a colonial taste to it. You know, like the curries the Indian Chefs used to cook for the British Aristocracy — lots of spice but without the heat. Quite enjoyable, although I felt the pattie could have been juicier and punchier. It’s an alternative for people who don’t take beef. 3.75/5 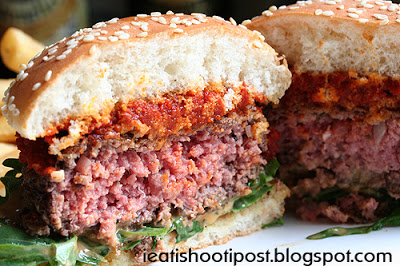 Next up was the well reviewed Relish Burger. I have been wanting to eat this burger for a long time. The pattie is made from Australian Chuck, machine ground and hand molded. It’s thick and done to a beautiful medium rare. The texture was great, but it lacked that chargrilled smoky beefy ooomph I was yearning for. What does stand out was the sundried tomato relish which added a delicious zing to the burger. 4/5 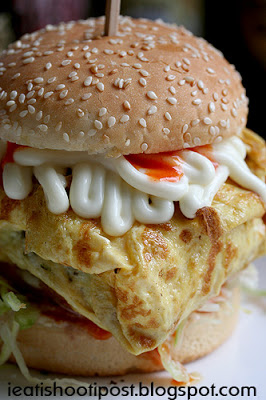 I remember having a incredible Ramly Burger when the Malaysian Tour Bus stopped at the interchange for a toilet break. It was 2am in the morning, chilly and there were cow pads littered all across the bus-park. That first bite of the piping hot Ramly Burger (accompanied by the aroma of dried cow pads) is forever etched in my temporal lobes. It cost only RM $1.50 at the time.

Therein lies the problem with the Ramly. If you are going to serve a gourmet Ramly Burger and charge $19 for it, it can’t just be bigger, it has got capture and go beyond that elusive Ramly burger taste. The problem is that a lot of the Ramly Burger’s taste comes from that piece of spiced up Cow Spareparts they call the pattie. It is of such dubious quality that our AVA won’t even let us import it into Singapore and it is certainly something you want to eat WELL DONE and truly dead.

The rest of the Ramly is quite reproducible. Once the pattie is done properly (it needs to be pan fried with curry powder and other condiments), it is wrapped in a thin egg omelet and topped with mayonnaise and (cheap) sweet chilli sauce.

So the problem with the Ram-Lee is the way the beef pattie was prepared. It was simply the standard burger pattie used in all the other burgers. It would have been much better if the pattie was spiced up so that it had more of that “Ramly” taste. It has potential as I feel that a beefier, juicier, spicy beef pattie can really bring the Ramly to the next level. Considering that I can get a pretty shiok Ramly for $3.50, I would find it hard to fork out another $19 for my next Ramly fix. 3.5/5 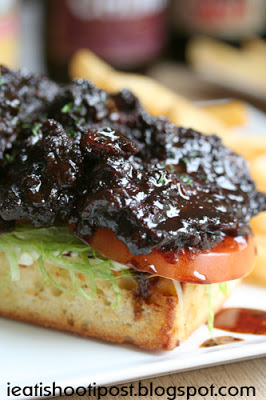 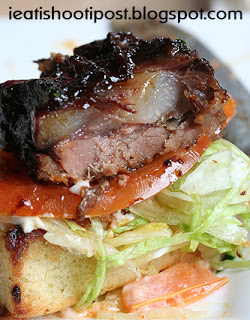 The one that really hit the U-Spot (Umami Spot) that afternoon was ironically, the Char Siew Burger which was not really a burger, neither was it really Char Siew. (At least in my books) It was an open sandwich topped with a luscious melt in your mouth piece of pork soft bone. Not very pretty to look at but it does amazing things to your taste buds. 4.25/5

There’s a lot going for Relish. The place has a nice laid back, airy feel about it and the simple menu of Burgers and Beer would appeal to many people. For a Specialty Burger place, I was disappointed that they didn’t serve a Classic Burger with the Works. (Closest they had was a Bacon and Cheese), but otherwise it is a great place for a casual executive lunch and a place to unwind in the evenings if you are into designer beers. 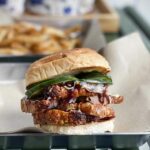 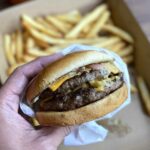 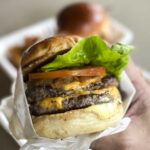 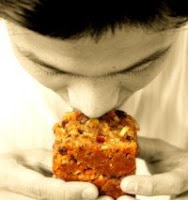 Uncategorized
ieat – ishoot – ipost: Which one you prefer?
Next 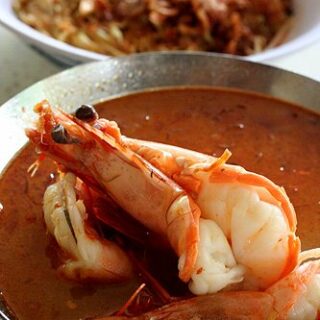 Introduction to ieatishootipost
Your Feedback on the New Layout