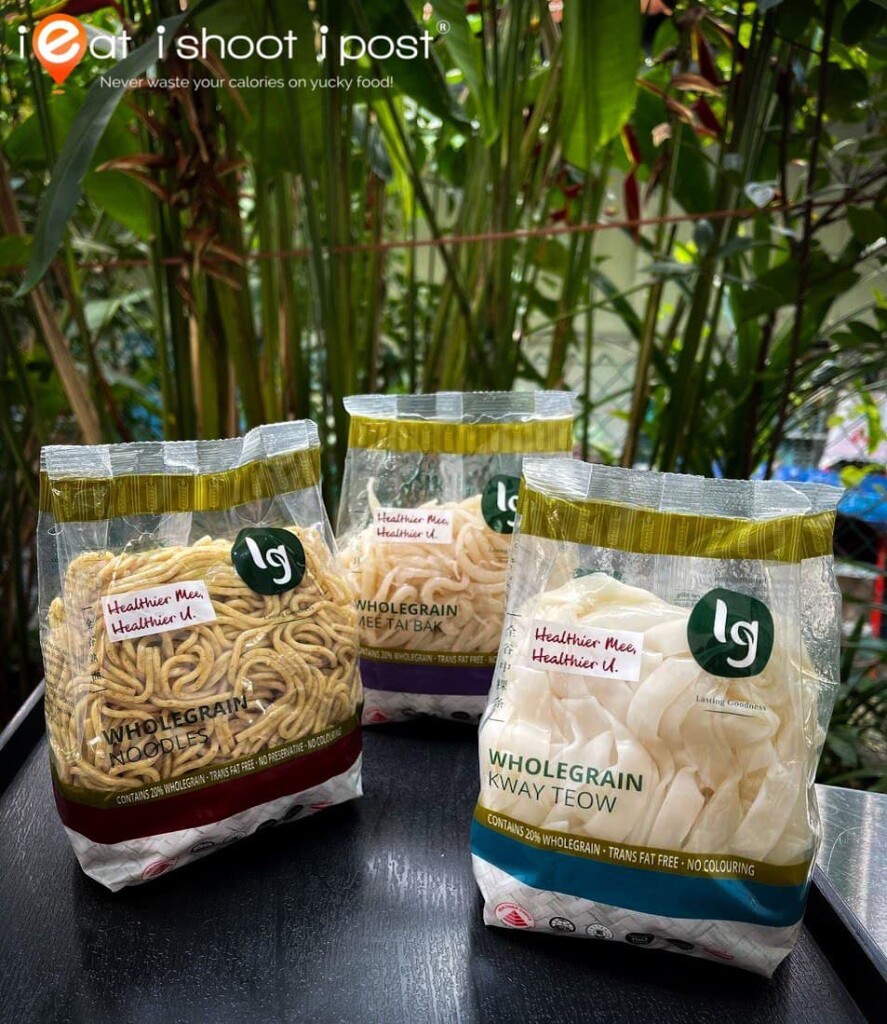 Where do you think the noodles that we eat come from?  I think a lot of people assume that our fresh kway teow and noodles are mostly imported from Malaysia, much like our fresh chicken and pork. I discovered Leong Guan Food Manufacturer Pte Ltd who sell their own brand of noodles under the LG label a few years ago while doing research for KL Hokkien Mee.  I am always on the lookout for authentic KL Hokkien Mee but I could never get hold of authentic tai lok meen in the past.  Most stalls import their noodles from Malaysia since it is not manufactured here and I find that the texture is usually not as chewy and resilient as those you find in KL.

Then one day I came across a really good KL Hokkien mee and discovered that there was a local noodle manufacturer who has started making them here! At the time, I had to get my friend to help me get a packet direct from the factory in Woodlands and he had to do a lot of talking before they finally sold him a packet as they were mainly selling B to B at the time. With the fresh tai lok meen,  my KL Hokkien Mee finally looked and tasted like the real deal! Here’s my full recipe writeup and video.

So, when Leong Guan approached us to visit their factory, we quickly jumped at the opportunity to finally see how our noodles are actually made!

LG Noodles are available at major supermarkets and online via Shopee, Fairprice Online and Amazon. Click for link to all the stores: http://bit.ly/LGNoodleShop

Leong Guan is a relatively newcomer compared to some of the other noodle manufacturers who have been here for generations.  They started as a noodle distributor back in 1996 where they supplied different types of noodles to restaurants and hawkers. They finally started manufacturing the noodles themselves in 2006 in order to satisfy their customer’s demand for quality and consistency.  Since then, they have done much of their own R&D and have produced many new products to satisfy their customer’s demands, such as the aforementioned tai lok meen as well as whole grain noodles!

They now make over 100 different types of noodles, catering to the needs of many hawkers, food caterers, restaurants, consumers and even food brands where they OEM. Together with all the noodles that they distribute, they are now one of the largest supplier of fresh noodles and one of the pioneers of fully machine operated noodle manufacturers in Singapore.

They currently run through a full silo of flour a day, producing 30 tons of noodles which is equivalent to 300,000 bowls of noodles and represents up to 20% of Singapore’s total consumption!

It is likely you have tasted LG noodles if you have enjoyed a serving of prawn mee, fried Hokkien mee, mee rebus or curry noodles at a hawker centre, food court or coffeeshop. Their yellow noodle is one of their top sellers and it is amazing to see how quickly the dough is mixed and pressed into sheets before being cut into noodles, cooked, cooled and packed all in a matter of minutes!

The process for kway teow is a little different from the noodles.  Rice is first milled and water added to form a slurry which is cooked over a large conveyor belt, creating large waves of noodles before they are cut into ribbons of gorgeous kway teow or hor fun.  The sight of the flowing white sheets of freshly cooked rice noodles really helps you understand why our ancestors actually started calling it “hor fun” (河粉) or literally “river noodles” in the past!

Aside from cooked noodles, they also make raw noodles like mee pok, egg noodles and ramen.  They make 10 different varieties of  egg noodles alone, based on client requirements.  Hong Kong and Macau noodles are amongst the most expensive as they use more premium ingredients. They also manufacture ramen for some Japanese restaurants which require special flour that is shipped from Japan.  Associate Manager, Kevin Lim share with us that the Japanese are very exacting in their requirements and they can only get approval to start manufacturing after an arduous process where the noodles have to be sent back to Japan for quality assurance testing!

Leong Guan with its focus on food science developed wholegrain noodles back in 2012 under its own initiative. Wholegrain noodles were subsequently adopted by the Singapore Health Promotion Board as a healthier alternative to traditional noodles as the government agency launched an initiative to create healthier food options in its fight against obesity and diabetes.   Leong Guan came on board as a partner of Health Promotion Board in continuing to develop and promote healthier ingredients. There were a lot of challenges in making noodles out of whole grains but through rigorous R&D, the team managed to produce a range of whole grain noodles that would meet up to the general public’s acceptance in terms of taste and texture.

To make wholegrain kway teow, brown rice is used to replace polished white rice in the milling stage.  The bran layer contains fibre and nutrients that is not found in polished rice which makes it a healthier choice. The lower glycemic Index of brown rice means that blood sugar levels don’t rise as quickly after a meal which is important especially for diabetics. We did a taste test of the wholegrain kway teow versus white version and found that apart from the slight brownish colour of the wholegrain kway teow, both noodles actually tasted quite similar!  Once you add some soy sauce and fry it, you really can’t tell the difference!

LG was one of the early pioneers in the use of machinery in noodle making when they started doing so in 2006.  We are told that it only takes 15 minutes for a pack of noodles to be made from raw ingredients.

There is little chance of the noodles inside your pack to have been touched by anyone. Workers come in mainly in the last bit of either taking the packs off the belt, placing labels or packing, so you can be assured that your noodles are safe to eat. 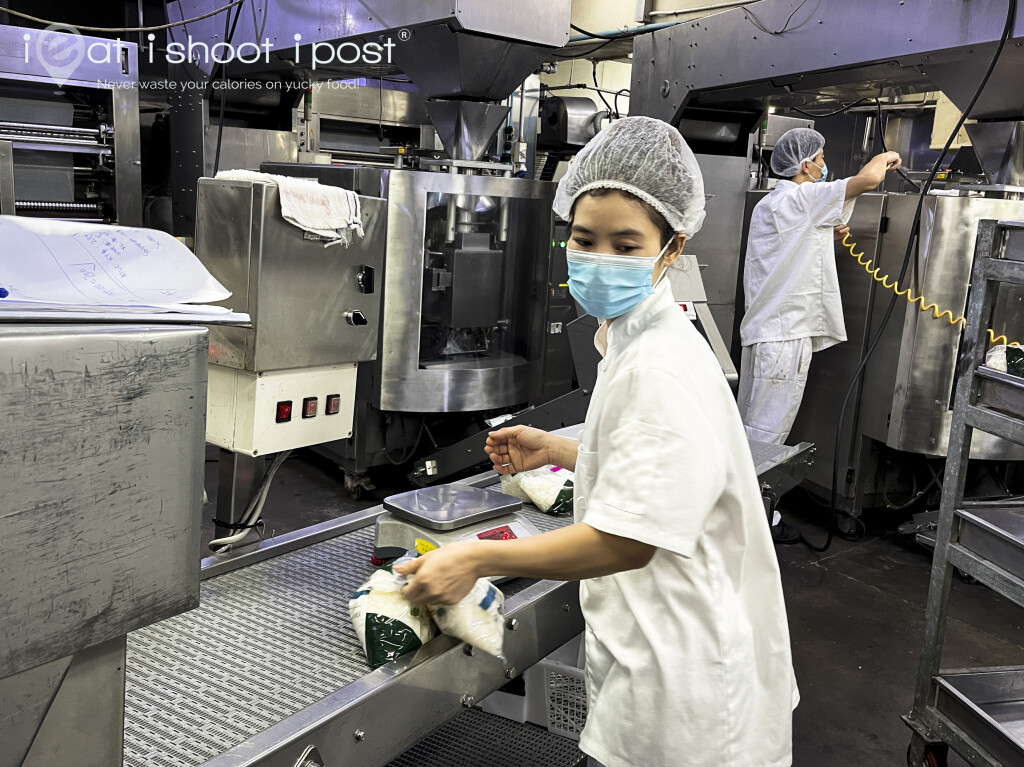 When LG started making noodles for retail consumption, they invested in pasteurization technology so that their noodles can sit on supermarket or our home pantry shelves at room temperature for longer.  For the local market, their “best before” date is 45 days from manufacturing.   For the export market, they may process so the noodles have up to 4 months shelf life!  This is really good because that means we don’t have to store the noodles in the fridge where they turn stiff and friable.  Remember to consume the noodles before it’s “best before” date.

Aside from noodles, Leong Guan also makes wanton skin, silken tofu and tau kwa. But being an innovative company, they also plan to produce easy to assemble meal kits soon.  Imagine being able to buy your fresh noodles packed with the sauce mix to make a delicious bowl of kway teow soup or Hokkien mee as quickly as it would take to make instant noodles! Until then, you should try making my simple scallion oil kway teow.  Simply steam your kway teow and then drizzle with scallion oil, soy sauce and fried scallions!  You will be amazed at how easy it is to make a tasty plate of fresh kway teow! 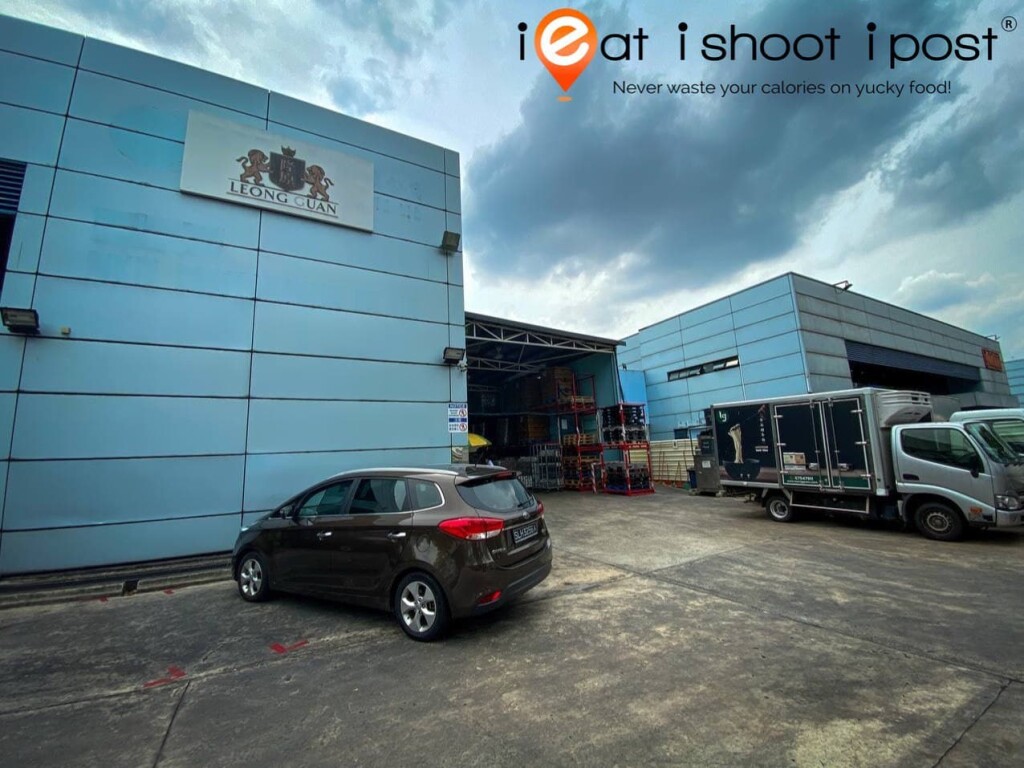 Glad you could join us on our factory visit!  Now that you’ve seen how the noodles are made, I hope you will feel more confident when you open your next packet of  LG noodles! Instead of instant noodles, why not look out for a pack of fresh LG noodles next time you are at the supermarket?

This post is written in partnership with LG Foods. 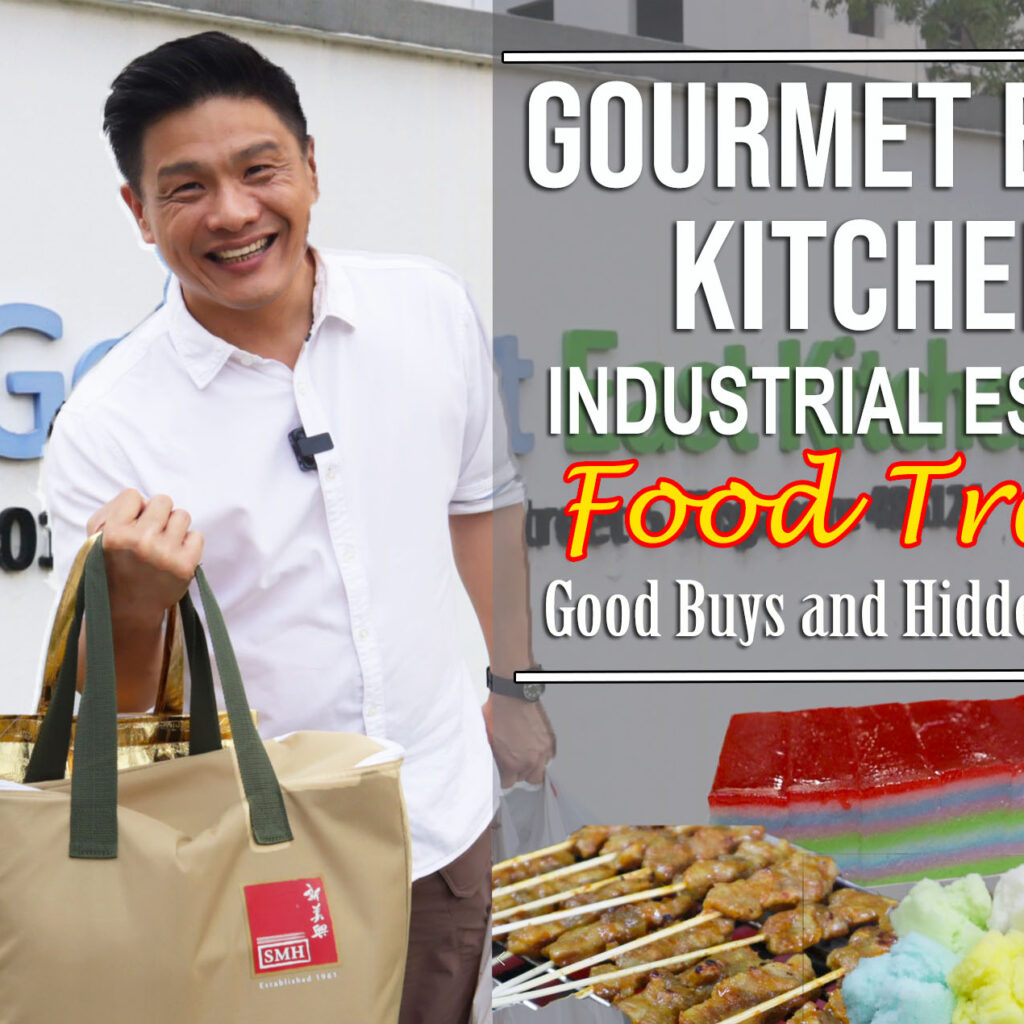 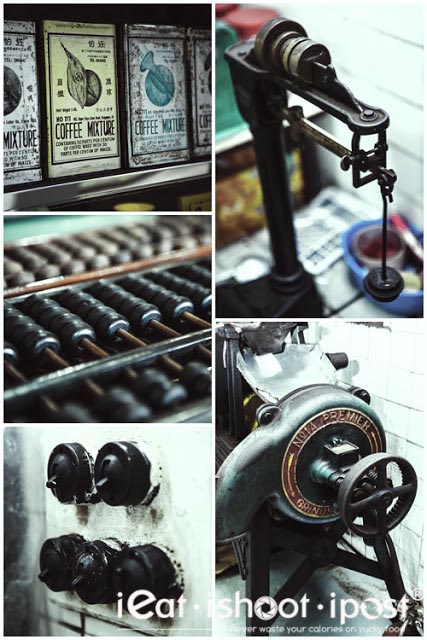 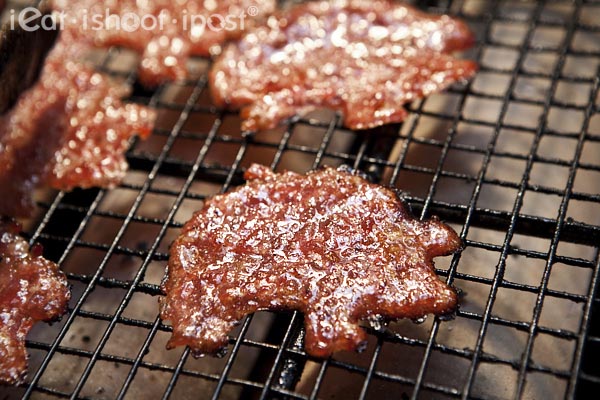 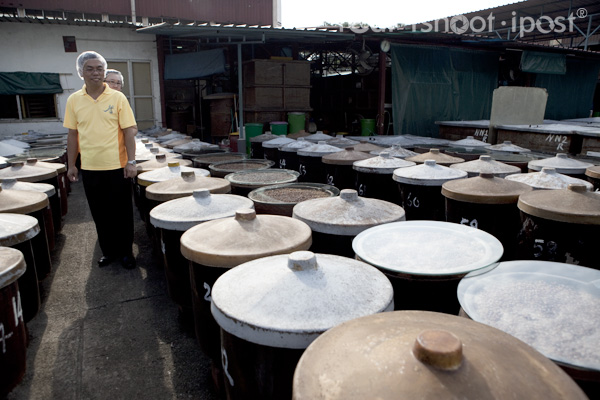 Where can I purchase this noodles thanks

Thanks for asking. LG noodles are available at major supermarkets and online through Shopee, Fairprice and Amazon. Here’s the link https://bit.ly/LGNoodleShop 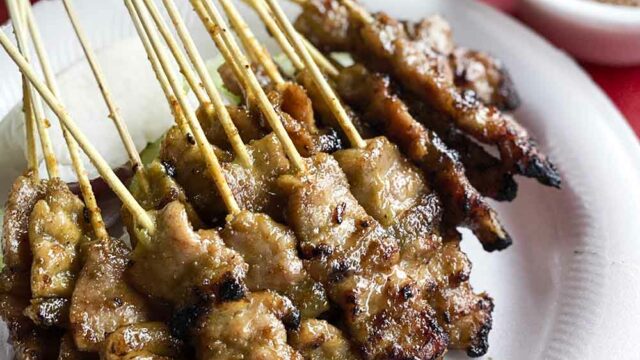