Sung to the tune of “Bad Romance” by Lady Gaga

You would have thought that with the social media, we would be able to flush the crooks from the honest Durian sellers but it seems that they are still very much on the prowl!

I usually buy my Durians from Ah Loon at Katong Durian, but occasionally when he is not open, I have to venture into shark infested waters which is a rather unpleasant experience. I guess there are two main ways that Durian sellers can cheat you. The most basic way is to give you durians that are either not ripe or are rotten. There are several ways that they do this. One is to just show you just the good part of the Durian when they know the rest of it is unripe and the other way is to show you a good one and switch it when they are packing it into the bag. Such tricks are easy to overcome. All you need to do is to insist that they open up the whole durian and pack it into styrofoam boxes or simply eat it on the spot.

However, there is another means of trickery that is a little more subtle of which you can only spot if you really know your Durians. One such Durian seller tried to pull this one on me recently by trying to sell me a Mao Shan Wang for $16/kg when the Durian was obviously of another cultivar, most probably a D13 which is only $6/kg. The D13 is still a very good Durian which has thick flesh and is sweet and creamy. But the unweary customer would easily be tricked into paying a lot more for the D13 simply by calling it a Mao Shan Wang.

It is with this sense of urgency that I write this post, because I really cannot tahan (bear) this sort of shenanigans.

I start with Mao Shan Wang because it is the one which most people know about and ask for. So if you are after Mao Shan Wang and have never eaten it before, make sure you download the photos so that you can use it as a reference when you visit the Durian seller.

Mao Shan Wang Durian are described to be oval to ellipsoid shaped, light green in colour and thick and short spines. The light green colour is sometimes difficult to spot because I have seen some which are more dusty brown in colour. 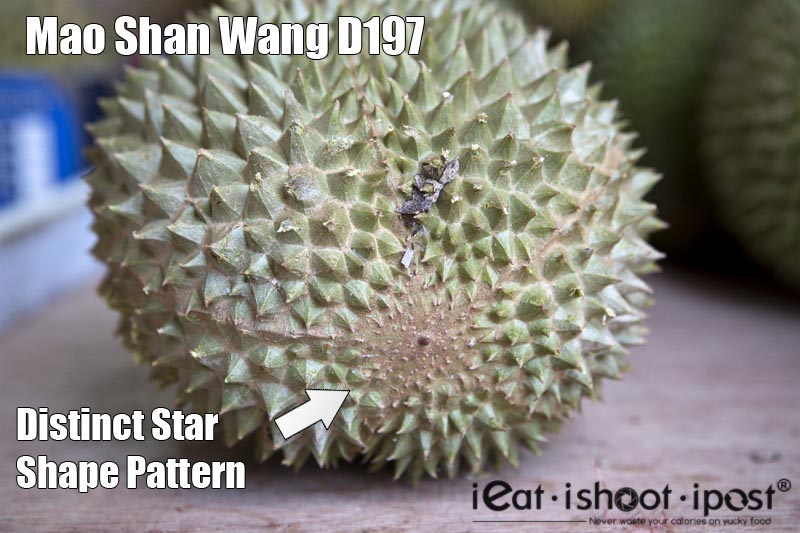 The tell tale sign is the star shaped pattern at the bottom of the Durian (assuming the stalk is the top). This is an area of brownish discoloration which looks like a starfish hanging onto the Durian for dear life. Just bear in mind that there are some other cultivars which also has a star shaped pattern. In particular there is one Thai breed called Chanee which looks very similar but has a round ring the size of a 5 cent coin in the middle of the star pattern. However, if you don’t see the star pattern than the Durian is definitely NOT Mao Shan Wang. At this stage the wisest thing is to simply walk away instead of trying to debate with the Durain Seller who can probably spin you a story to get you to buy the Durian anyway. That is the best case scenario, the worst case scenario is the he would start getting violent and abuse you! So walk away! The flesh of the Mao Shan Wang is a very characteristic deep buttery yellow (almost flurorescent yellow) colour and should have a very rich, sweet and sometimes bitter taste. During the main Durian season which is from Mid June to Mid August, the Mao Shan Wang is just about the only durian in the market that has flesh of this colour. In between the Mao Shan Wang season, some suppliers do bring in the aforementioned “Chanee” whose flesh has a similar yellow hue but lacks the pungent odor of a real Mao Shan Wang.

Do take note that Mao Shan Wang season is around Mar-Apr, June-Aug and Oct-Nov. We are now in the main season while the Mar-Apr and Oct-Nov periods are smaller seasons. So be weary if someone tries to sell you Mao Shan Wang at any other time!

Now, just because you have been sold a $16/kg Mao Shan Wang doesn’t mean that it is necessarily the best. In fact, the best Mao Shan Wang you are going to ever eat would probably cost less because you would have eaten it at the peak of the season when the prices drop due to the large number of fruits falling off the trees.

The quality of Mao Shan Wang also depends on the which plantations it comes from and on the weather during the preseason. Our Mao Shan Wang generally come from two places, Johor Bahru and Pahang. The ones coming from the Bentong region in Pahang is considered the best and amongst these, the cream of the crop are the ones growing on top of the hill! But you are not going to be able to know all that as a consumer. All you want to know is the tell tale signs when eating the fruit.

A really good Mao Shan Wang from an old tree would have shrunken seeds and lots of flesh. It should be pungent, very creamy, sweet and bitter at the same time. Another characteristic of Mao Shan Wang flesh is that you can easily peel the flesh off the seed and you can often see the seeds peering out of the flesh. It should not have any fibres and it is usually drier and pastier when compared to say, XO durian which is more watery. The fruit from young trees are easy to spot as they are not very fleshy and the seeds are not shrunken. The flesh also doesn’t have the same sheen as a premium Mao Shan Wang and you should not be paying top dollar for such a fruit.

Here’s an excellent description from one of our readers of what you should get if you are paying top dollar for a MSW:

“True breed will have close to luminescent yellow colour type of flesh, plus it will always be small flat seeds. The texture also differs from other breed, it does not have the rooty type of fibre and usually you can peel the flesh off the seed easily. Big size MSW, 3kg n above type, will have very creamy flesh, the tension of the flesh is very taut, once broken it oozes out. The smaller ones, 1kg plus, will be more sticky type will slight creaminess. The taste of MSW is always bitter sweet, to get the more bitter ones, go for lighter green husk, sniff along the lines n u can almost detect the aroma.” – Tommy Lim

There are two other cultivars that come into season at around the same time as the Mao Shan Wang. They are also very good Durians but only costs around $6/kg. Because their flesh is also very impressive, sometimes they might be passed off as Mao Shan Wang to the customers. However, it is actually very easy to differentiate these from actual Mao Shan Wang.

The first is a popular cultivar grown in Johor called the D101. The fruit looks very different from a Mao Shan Wang as it is usually a large, ellipsoid shaped fruit with spines which are long and thin as opposed to the short and thick spines of the MSW. 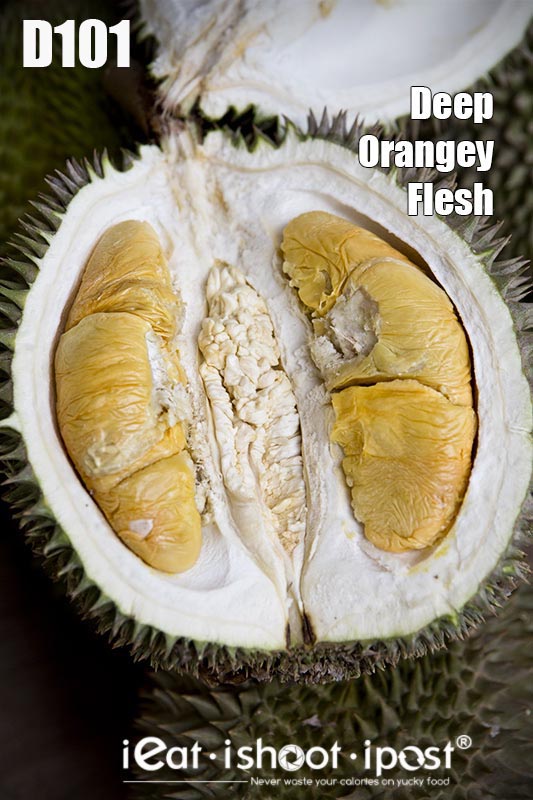 The flesh is thick, soft, sweet and creamy but a little less pastey compared to a MSW. It is still a good Durian and great value at less than half the price of a MSW. The orangey colour of the flesh is close to another Durian from Penang called the Ang Hei (D175). As a result the D101 is sometimes erroneously called a Johor Ang Hei.

Another cultivar that has a similar deep orangey coloured flesh is the D13. It is around the same price as that of the D101 but it has a thicker and heavier husk, so you will end up paying a bit more for a fruit of the same size as the D101. The shape of the D13 is typically sharp and pointed at the bottom end as opposed the the more rounded rectangular shape of the D101 and the thorns are thicker. 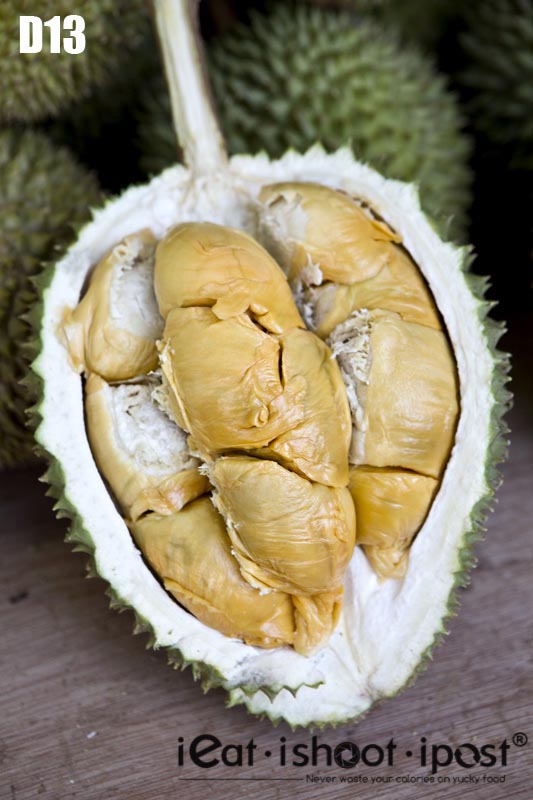 Being able to recognize a real Mao Shan Wang is critical in the cat and mouse game that we play with Durian sellers. However, the best advice is still to buy your Durians from a honest and reputable seller. So if you have anyone to recommend aside from Ah Loon at Katong Durians please let us know! 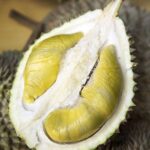 Hi is this shop still operating? Tried calling but number has changed 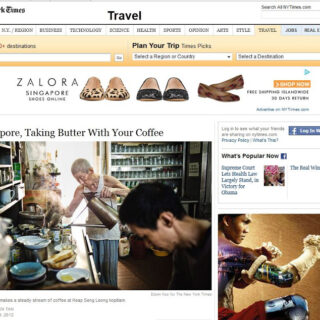 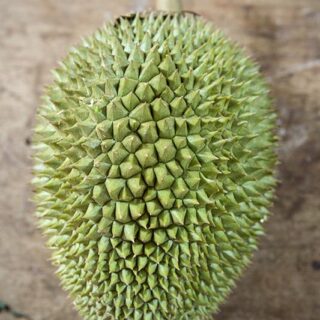 Durian Files
Ah Kok Durian: Before the reign of the Mao Shan Wang