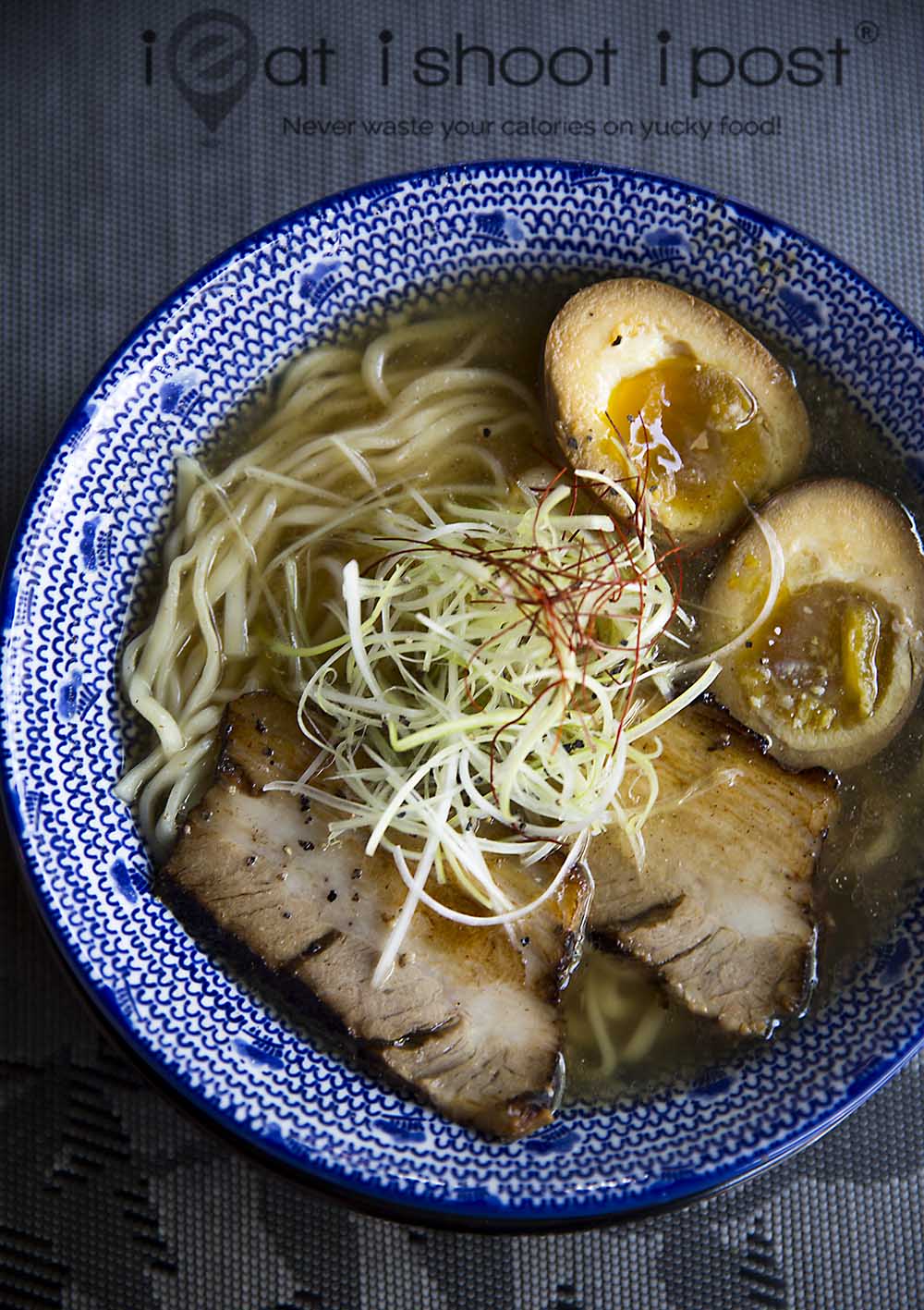 This stall is closed.
Remember the old school Hainanese Coffee House?  It’s a place where you can get western food, Hainanese pork chops, hor fun and a good cup of sock brewed coffee!  They were operated by Hainanese chefs who wanted to give Singaporeans a cheaper alternative to European restaurants in the old days.  In Hong Kong, they have a similar concept known as the Cha Chaan Teng which are still very popular.  Unfortunately, unlike the thriving Cha Chaan Teng, the popularity of our Hainanese Coffee Houses have dwindled over the years. One of the few remaining ones is Prince Coffee House along Beach Road which is still serving their oxtail stew alongside stirfried long beans with cornbeef! 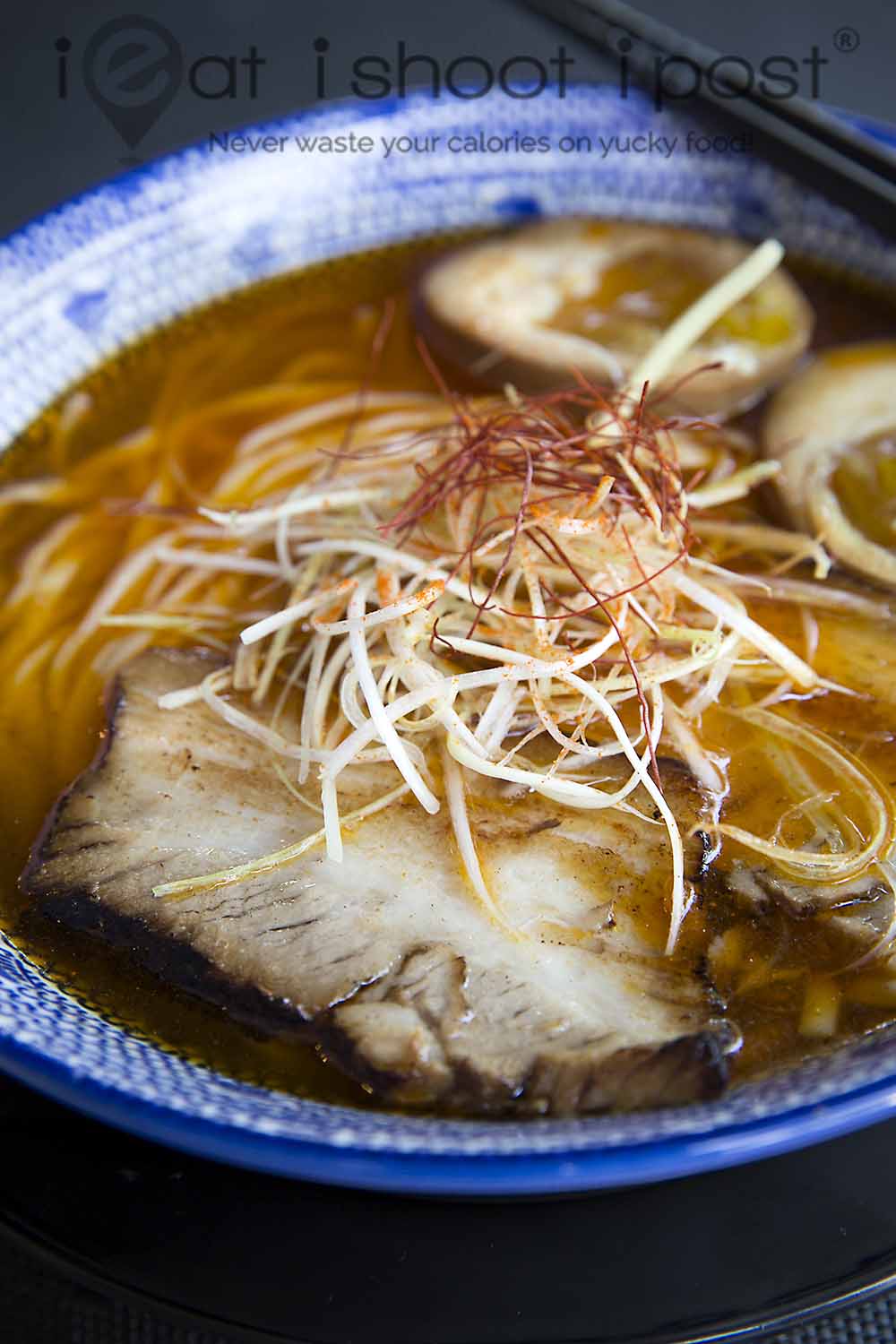 The reason I brought up the Hainanese Coffee House is because I can’t really decide what type of eatery 73@Hillcrest falls under.  In some ways, it is like a Hainanese Coffee house but not quite.  It is also similar to a coffeeshop but again, not quite.   Located along a row of shophouses with Baker and Cook on one side and Pepperoni’s Pizza on the other,  it is the one we are supposed to pick when playing the Sesame Street sketch, “One of these things is not like the other“.

It is essentially a coffeeshop by day which turns into a bistro at night.  It’s like a coffeeshop in the sense that there are a few stalls selling different things, from ramen to kidney mee sua, to steaks, and burgers, kaya toast, waffles, kopi and cappucino.  But unlike a coffeeshop which for most people is just a place to eat, the owners of the eatery are always there to greet the patrons making it feel more like a hangout where you go to meet old friends. 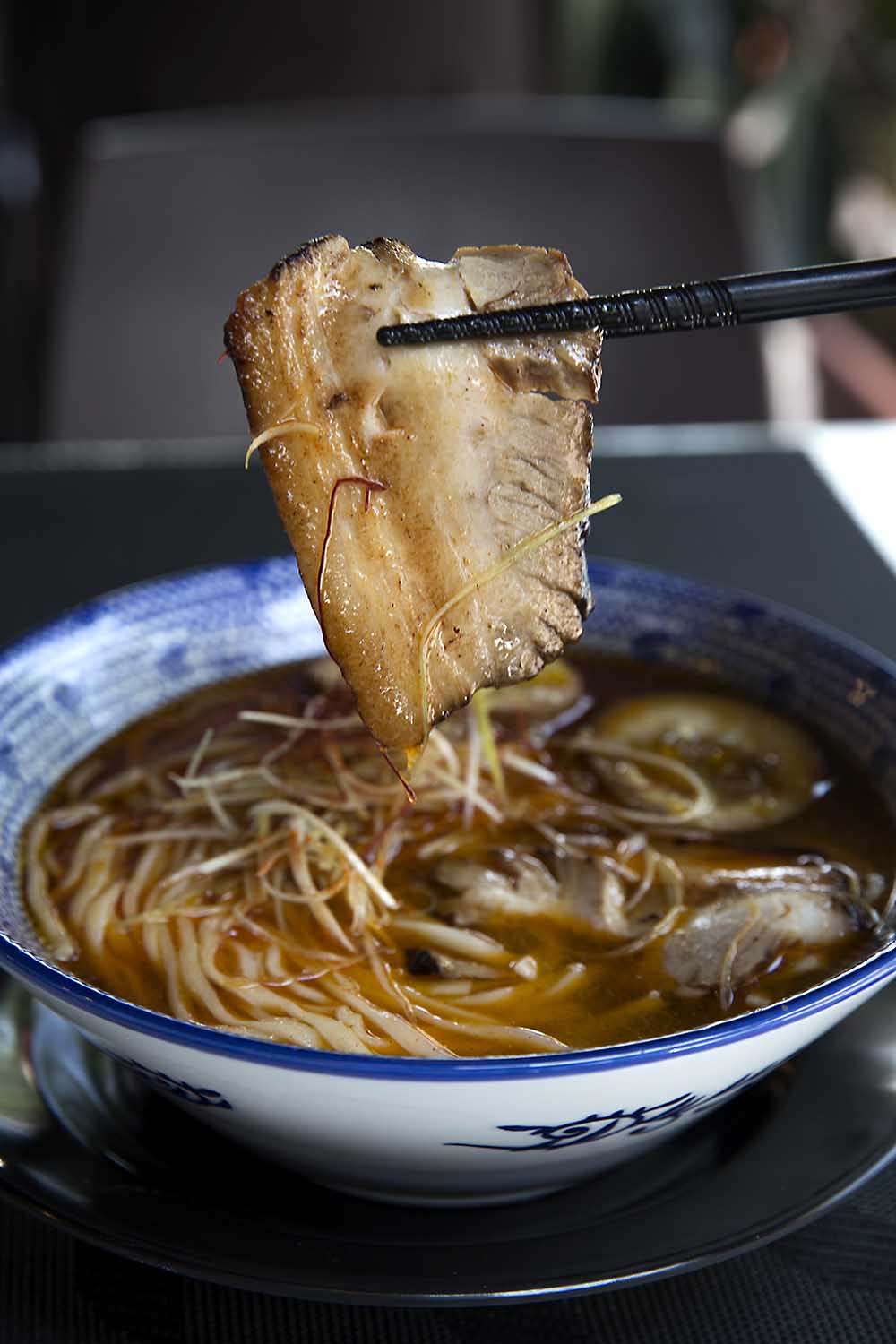 I have been visited the place on several occasions since they opened in 2016 and soon got to know the owner, Yau Boon quite well.  He is a businessman who has heeded the call to open an eatery to cater to the community. With no prior F&B experience, it was quite a steep learning curve for him.  Over the last two years he has had to make quite a few changes but finally this year, he has managed to open two new stalls which I felt are very good.

The first is a branch of Enishi Ramen, a Michelin Bib gourmand eatery from Kobe. Unlike a lot of ramen stalls nowadays that taste very commercialized, the ramen here has that rustic “hawker” feel about it.  The soup is a very light dashi broth made from flying fish flakes which is light and tasty. The charshu and eggs are just about the best I have come across in Singapore. The meat is tender and moist with a deep ebony crust on the outside. The eggs are soaked in the braising sauce for two days and you can actually see the marinade penetrate all the way to the yolk!  At $12 nett, it is one of the best bowls of ramen you can get in Singapore. 4.5/5 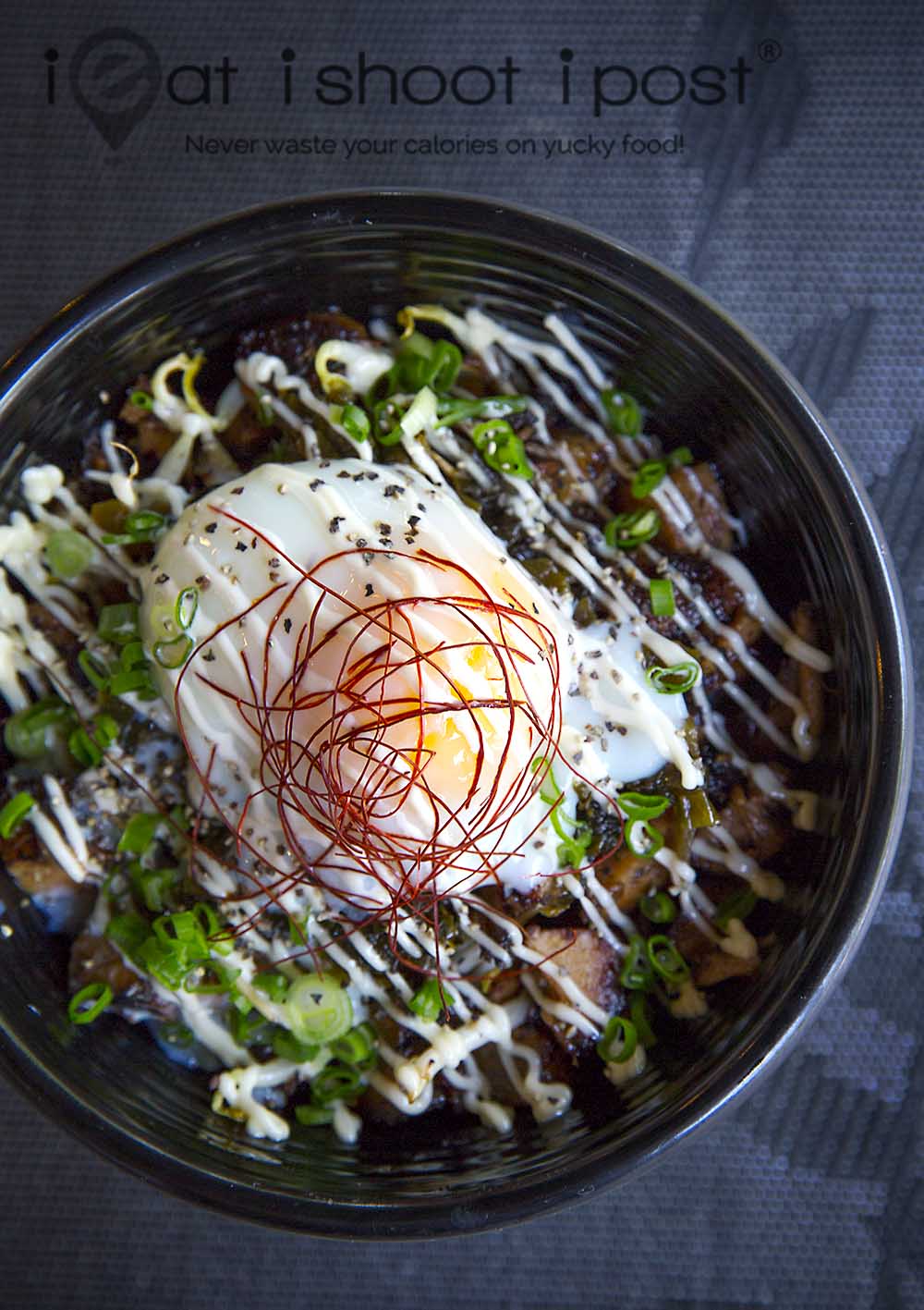 Their charshu don is also well worth trying. It is topped with cubes of their delectable charshu on a bed of Japanese rice that is blanketed with takana, the Japanese version of our mei cai and topped with a perfectly cooked egg.  $8 nett. Very oishii!   4.25/5

The other stall is run by another businessman-turned-hawker, Daniel,  who happens to run the tuition centre just next door.  He is an avid home cook who used to delight his guests with local dishes like bak chor mee and oyster omelette.  His dishes are so good that his friends started egging him on to open his own stall so that they can eat his dishes without needing an invite!

Daniel makes a very competent bak chor mee, which has been christened “ACS bak chor mee” for the fact that he is an ACS alumnus and a fair number of his patrons are also from ACS.  It is good but not so good that you need to travel all the way there to eat.  So, as a Saint, I can only say with that “The best is yet to be”. 4.25/5

What is worth a trip is Daniel’s yo ji (kidney) mee sua. This dish is not commonly available and is made from a recipe inherited from his grandmother.  The soup is full bodied and rich in black sesame oil.    This hearty, home-cooked bowl of grandma’s goodness would surely transport you back to the days when buses had no air-con and doors!  You can also add a shot of brandy for an extra $2.50 for even more oomph!  4.5/5

Their bistro serves very decent western meals.  One of the dishes I would recommend is their Iberico pork ribs which are fall of the bone tender and nicely charred on the exterior.  They are slow cooked in the oven and finished on the grill.  Iberico ribs are very well marbled and benefits from the long cooking time which turns all the connective tissues and fats into tender and juicy ribs! 4.25/5

For the kids and the young at heart, (I actually instigated Yau Boon to come up with the dish) there is the upmarket version of the sausage McMuffin which is made from a house-made pork sausage pattie, cheese, egg and sandwiched between a fluffy Japanese wheat flour sourdough muffin.  Much bigger and more substantial than the fast food version and served with hash brown and salad. 4.25/5

They have other breakfast items on their menu like the big breakfast, waffles, avocado and poached eggs on toast and the like.  They are competent and a convenience if you don’t wish to cook it at home by yourself.

Another dish which I am getting Yau Boon to introduce is the braised beef short ribs which I have been cooking at home.  A meal of tender, slow cooked short ribs with smooth and buttery mashed potatoes is ultimate comfort food for me and even though I can cook it at home, it’s still takes quite a bit of effort especially in procuring the ribs!  Quite a few of my fans have been wanting to taste my short ribs after I put it up on my Instagram page, so I thought I would get Yau Boon to make it available for everyone to enjoy at the bistro!

This is an offbeat little eatery which is quite hard to categorize.  They serve an eclectic mix of dishes which should appeal to everyone in the family.  The food court style chairs and tables betray it’s cordial atmosphere which has gradually grown to become a community space for the neighborhood.  The ramen and the yo ji mee sua are definitely worth a trip and if you are wanting to try the slow cooked beef ribs which I have been making at home, then its also available there!

A little pricey, but the quality looks outstanding.

Which one pricey? Ramen is very good value and the amt of sesame oil they use for the yo ji mee sua is quite generous.

I am by no means saying they aren’t a good value, but ramen here in Japan costs a standard 600 yen a bowl. So when things climb above that it reads as ‘pricey’ to me. Furthermore, I kind of expect food in a coffee house to be a little more economical. But, yes, I get that this is kind of a more upscale coffeehouse, so prices are fair, but also kind of high (but not for the quality).

You don’t often see a Japanese chef in a coffeeshop here though! I admire the young man, he must feel so isolated! 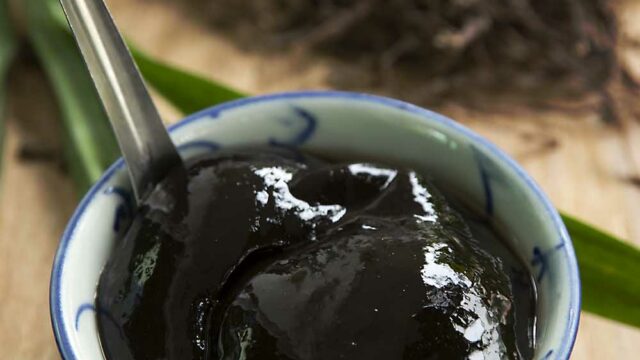 Chin Chow
How to make your own Chin Chow recipe!
Next 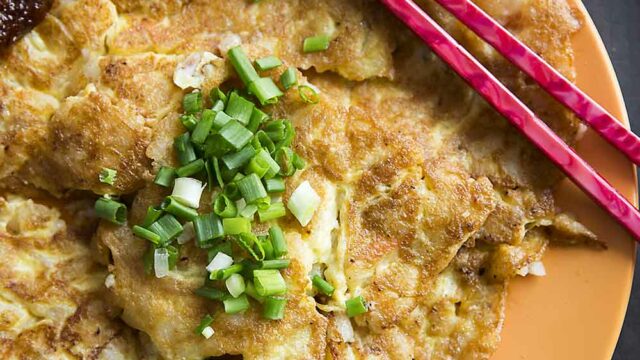 Best of the Best
Chey Sua Carrot Cake: White only no Black!