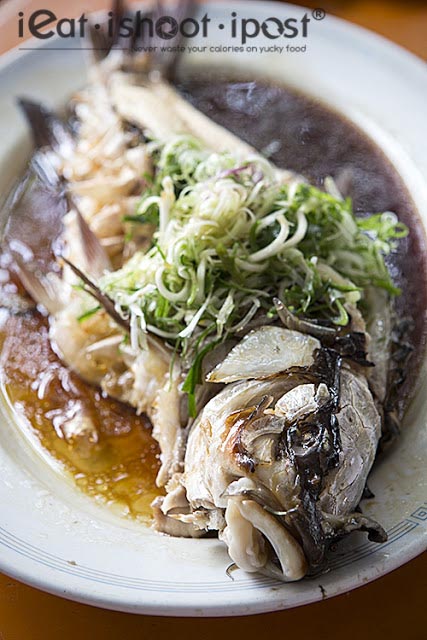 I have been waiting for the opportunity to taste the Empurau since I first blogged about Zai Shun last year. While I was enjoying his “Sultan” fish, the boss told me that there was an even more exquisite, more expensive, more tok kong, more legendary fish that comes from rivers of Malaysia — The Empurau (tor tambroides) aka Malayan Mahseer aka Kelah. But it was the Taiwanese who first ate the fish and give it its most famous name, 忘不了 (unforgettable).

So after a year of patient waiting, I got a call from the boss of Zai Shun that he has finally managed to get his hands on some wild caught red Empurau from Sabah. These were caught by the local fishermen and immediately gutted, frozen and air flown to Singapore. 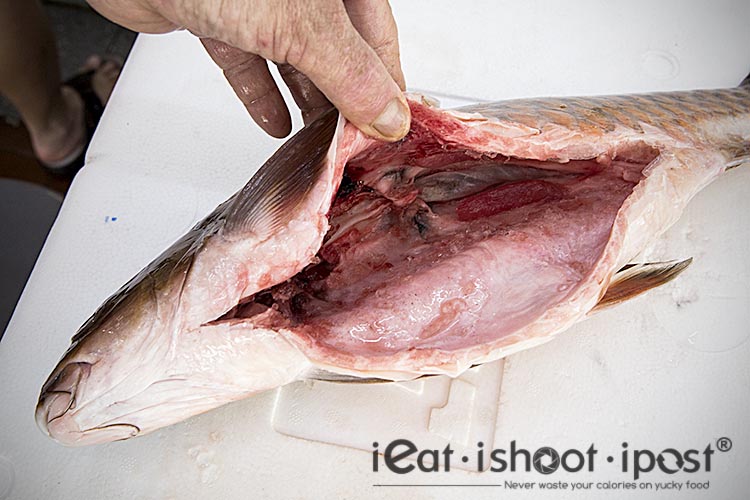 The last time I checked, live Empurau that was selling at Majestic Bay Seafood Restaurant at $780 per kg. These were, of course, the price for live fish rather than frozen. Usually live fish that are kept in tanks are of the farmed variety rather than wild caught. Wild fish do not tend to keep very long in tanks and with a fish as expensive as the Empurau, not many restaurant owners would want to take the risk of keeping a wild Empurau knowing that they would suffer a huge loss if it dies before the customer orders it. So, I expect that if you do see live Empurau, they are more likely to be the farmed variety. The frozen fish is properly thawed out by keeping them on ice overnight in a foam box. The key to keeping the quality of the fish at its optimum is a quick freeze and a slow thaw. This is in fact what happens with most of the salmon that we eat at the sushi bar. 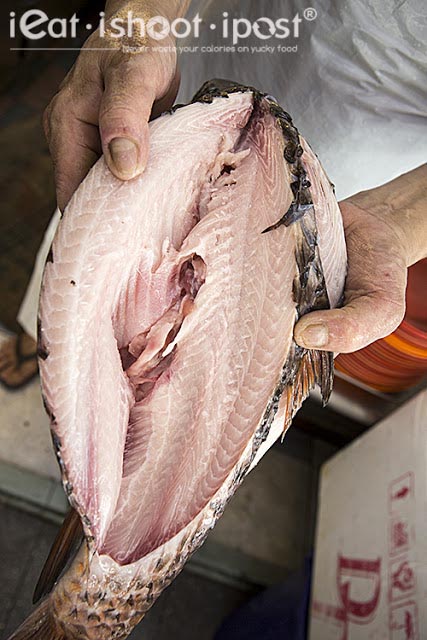 So, I guess what you all want to know is whether the 忘不了 really lives up to its name, right?

Let me just say that when the freshly steamed fish hit the table, I went straight for the belly of the fish and I can still remember the flavour of it till this day. I would say that it ranks right up there with my top 10 most memorable taste experiences, right next to the first time I ate Otoro. The sweetness of the flesh and its unique flavour is very distinct. Its natural diet of palm fruits falling along the banks of the river makes its flesh very sweet and velverty smooth. Even both my kids and my son in particular, who usually shun eating fish were asking for 2nd and 3rd helpings! 4.75/5

You have probably heard the people say that the scales of the Empurau are edible. Well, it turns out that they really are. However, I think that people eat the scales because of the fact that this fish is so expensive that you really don’t want to waste any of it. I tried a few of them and they tastes like the plastic wrapper which got stuck to your melted lollypop.

Although the Empurau is a fresh water fish, you don’t get that muddy taste that you sometimes get with freshwater fish like tilapia. The flavour of the flesh is distinct from salt water fish as is the texture which tends to be softer and less bouncy. It’s more akin to Sea Bass which live in brackish waters rather than the springy flesh of a Red Spotted Garoupa. The fish is rather bony and has these very distinct Y shaped bones which are thin and soft. So this is a fish that you tend to savour slowly. It is a very oily fish and although the oil is concentrated in the belly area the rest of the fish is also quite smooth to the palate. But the belly is by far the sweetest and the most 忘不了part.

The Empurau really does live up to its name. I can’t see myself ever ordering a live Empurau at $780/kg, but this frozen one which costs $180/kg is well within reach especially if you are sharing with a group of friends. The taste is similar to the Lampam ($120/kg) which I ate at Zai Shun last year and I honestly cannot tell you how they compare unless I have the opportunity to eat them side by side. I can say though, that my first bite of the Empurau did leave me with a much deeper impression than that of the Lampam.

Note:
Empurau may not be available all the time, so if you are intending to visit Zai Shun specially for this fish, you should call first to check for availability.

Next Gen Hawkerpreneurs
Preserving our Hawker Heritage: How about Migrant Hawkers?
Next 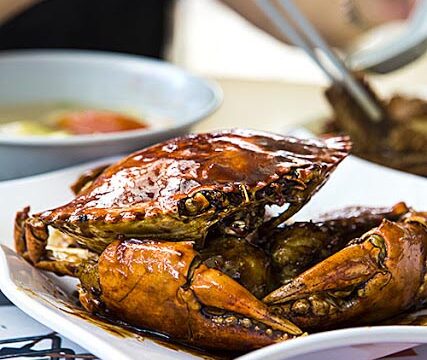