A big thank you to everyone who supported our 2nd Anniversary Charity Makan Session which was held at Aston’s new restaurant at The Cathay.

This year we are supporting the kids from Oakley Prison’s Ministry. As you can see from the pictures, the kids really had a great day out. It really does warm the heart to see so many happy smiling faces! 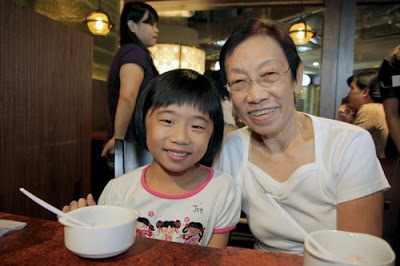 I had the privilege of talking to this little girl who is looked after by her Grandma because her daddy is still awaiting release next year. Her mother had left her when she was still a baby, so Grandma is her sole caregiver. In order to keep things going, Grandma is still taking on oddjobs while she is at school. It was such a happy day for her as she seldom gets to eat out let alone watch a movie. It’s all worth it if just for this one little girl, isn’t it guys?

After the kids went off for their movie, our makan kakis were treated to a produce degustation courtesy of Greengrocer.com.sg. Boss Helene gave our kakis an introduction to gourmet produce from around the world. I think the only complaint that day was that there was too much to eat. (OK lah, that’s better having to go for Hokkien Mee afterwards). By the time the ieatSuperburger MkII beta appeared, everyone was already so stuffed!

The auction went very well and everyone were in a charitable spirit. The biggest bid was $500 for the dinner for eight at Ya Kwang, by Nuffnang boss Ming. In all, we managed to raise another $8844 for the Oakley Prison’s Ministry which will be used to buy other stuff that they need.

Praise God for bringing ieatishootipost to its 2nd year anniversary and for bringing so many kakis into our midst without whom the makan session would not be possible!

Event Organizers: TauKwa who was in charge, Khim for registration and seating and Cactuskit for planning and photographing the session.

Toothfairy and the Touch Soccer team for raising $1000 for the kid’s goodie bags.

I would also like to thank our sponsors for making the event a great success!

For providing the meals for the kids as well as our guests. Astons has donated all proceeds to Oakley. A big thanks to all the staff of Astons who also volunteered their time to serve the us and the kids! LINK

For sponsoring the produce for our gourmet degustation. You can buy the produce we ate directly online by going to the greengrocer website: LINK

For sponsoring the Movie Tickets and drinks for the kids. LINK

For providing the mooncakes and donation of $500: LINK

For sponsorship of the ieatishootipost T shirts: LINK

Donation of the Powershot A590IS for the auction: LINK

For donation of 30 complimentary tickets and drinks for the kids: LINK

Donation of the Samsung lazerprinter for the auction: LINK

Donation of a lavish dinner for eight: LINK

Officers of 3rd Combat Support Hospital for their donation of $334

Donation of a Creative Vado: LINK

Joey Kuan for donating stationaries for the kid’s goodie bag.

Everyone who were unable to come but still sent their cheques and donations to the event!

Just received another cheque for $500 from Hungrybear residing in Spain. That brings the total to $8844. Thanks Hungrybear! 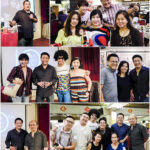 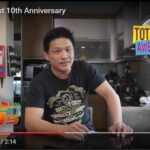 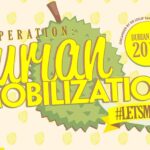 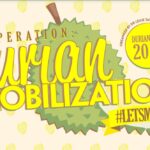 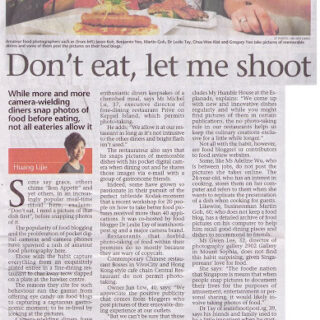 Featured in the Media
ieaters on the Sunday Times!
Next 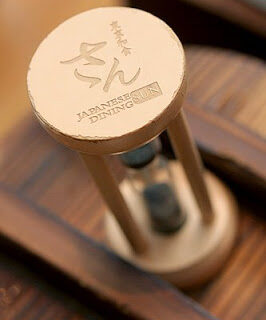