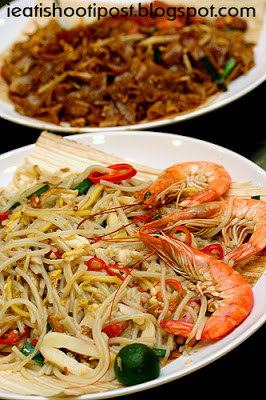 It is a shame that a lot of kids who are growing up nowadays cannot speak their own dialects. It is especially true for most dialects except for Cantonese which is preserved because of the movies and music coming out from Hong Kong. Sadly, my own kids can’t even say “Teochew Nang Kah Chng Ang Ang” (Teochew people have red backsides). Well they can but they do it with an English intonation. While we have done a great job at promoting Mandarin as the unifying language amongst the Chinese people, I think it came at the expense of losing the rich Heritage of the different Dialect groups. 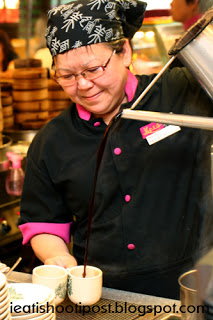 As the margins between the different dialect groups slowly become blurred, the foods associated with the different dialect groups also become less distinct. Thus we have Hokkiens selling Hainanese Chicken rice for instance. Interestingly, the phenomenon of fusion never really made its appearance across the dishes. I don’t think I have ever seen a Teochew man selling Hokkien Mee who would try a fusion Hokkien Char Kway Teow Mee. The closest I got was a Teochew Man frying Char Kway Teow who addes a Seafood stock to his Char Kway Teow just like a Hokkien Mee. But the dish is still distinctively a Char Kway Teow.

I am glad that the good people at Kopitiam also feel the need (as I do) to preserve the heritage of our dialect groups when they set up their latest Food Court. The new Mei Shi Mei Ke Food Court at Hougang Mall endeavours to embrace the local dialects and highlight the origins of our local favourites.

The first thing that impresses you as you approach the Food Court is the decor. They have Chinese style tables and chairs and calligraphy decorating the walls featuring nursery rhymes from the five common dialect groups. The uniforms that adorn the hawkers also hint of the past. Not quite Samsui Woman, but the association is not difficult to make.

Aside from the outward appearance, Kopitiam has also made the effort to resurrect some of the less common hawker fare that are novel even for a Gen X guy like myself. 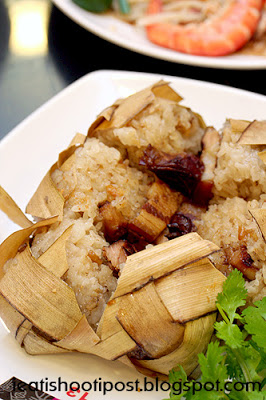 Take for instance the Hainanese Coconut Leaf Dumpling which was a first for me. This seems like a cross between a Bak Chang and a Ketupat. I was told this is a very traditional Hainanese dish. The Glutinous rice is dry and has bits of dried shrimp mixed into the rice and filled with Kong Bak and mushrooms. It’s not moist like the more familiar Lotus Leaf Dumpling but dry and savoury like the Pulut Pangang. Quite an interesting dish to try. 4/5 Both carnineviand and I were especially delighted by the Hokkien Fried Pork Stuffing (Ngor Hiang) which was being sold at the Mini Wok stall. It was one of those long lost tastes which suddenly triggers that sense of nostalgia that I had difficulty identifying at first. Even doing a Google search in my long term memory failed to produce any results until carnineviand suddenly said “Swimming Pool”, and then it all came back to me. It was that Ngor Hiang that I used to eat after swimming at Toa Payoh Swimming Pool almost thirty years ago! Carnineviand’s eyes also lit up and we were both celebrating the fact that we were at the same swimming pool at around the same time!

This might sound very unusual, but that cheap, 30 cent, Swimming Pool canteen Ngor Hiang was the absolute tastiest pseudo-meat morsel that can really satisfy a palate that is thoroughly cleansed by chlorine. Since then, I have never really found a Ngor Hiang that had that particular taste, that is, up till now! 4.5/5. 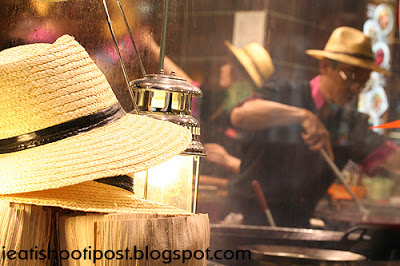 Perhaps the most decorated stall that they managed to attract is Orchard Road Hup Kee which is famous for its iconic straw hat which serves their Hokkien Mee and Char Kway Teow on Opeh leaves. 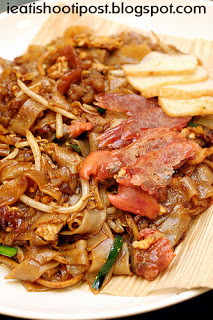 The Hokkien Mee was certainly one of the better ones around. However I am of the opionion that Hokkien Mee is very much an operator dependent dish unlike Laksa where the gravy can be prepared beforehand, in Hokkien Mee there is the element of frying that is operator dependent. Thus, no matter how good the stock is, it boils down to the control of the wok fire and the timing of the stir fry. This is the single element that separates the good from the great. Having said that, both Hokkien Mee and Char Kway Teow here are very good but just lacks that final element to make it great. 4.25/5 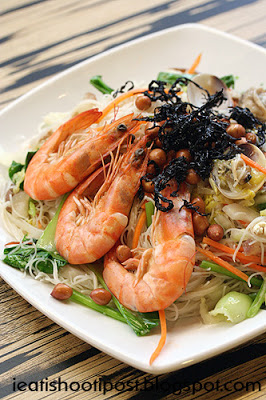 Those looking for something a little different to tingle the tastebuds would be very happy to find an outlet dishing out Pu Tian Xing Hwa cuisine. Pu Tian cuisine is gaining popularity in Singapore with many new restaurants opening around the island in recent years and it is good to see that we can now enjoy the food without having to go to a restaurant. The Pu Tian Fried Bee Hoon uses a very thin Bee Hoon, typical of the dish and is cooked in a very mild stock and topped with seaweed and peanuts. Quite a good dish where you can appreciate the taste of the Bee Hoon as the flavours are not overpowering. 4/5 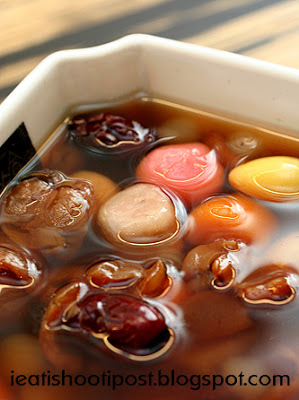 I remember eating these Fen Yuan when I was a kid. Mom used to make them to celebrate Dong Zhi which marks the beginning of Winter (in China of course) and used to tell me that I would be one year older when I eat it. Nowadays it is more common to see Tang Yuan which is filled with peanuts, red beans or sesame paste. So I was very intrigued to see that the dessert stall here is making the Fen Yuan by hand. Aside from the pink and white ones they also have yam and sweet potato flavoured Fen Yuan. It is certainly a blast from the past. 4/5

This is certainly a food court with some character! Kopitiam has managed to create an environment where parents might feel the urge to teach their kids a little about the past, ala “Tan Ah Teck”: “Long long time ago, when your father was still your age….. we used to eat this Fen Yuan during the Dong Zhi festival……” It would be great to see more food courts like these and to have the concept extended to include our Malay and Indian heritage foods! 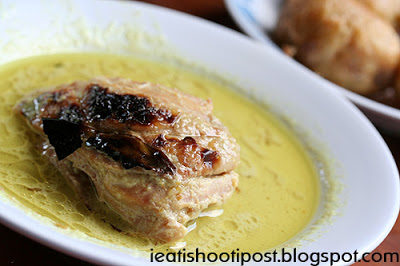 THE MUST TRY LIST
Sabar Menanti II: Good things come to those who wait patiently