The first time I came across the name “Le Chasseur”, I thought it was a French restaurant. Then when I found out that it was serving local cuisine, I thought it was some French way of saying “The Char Siew”. Then I found myself standing right in front of the restaurant one day wondering what to eat. I was thinking to myself that I had vaguely heard of name before but after peering inside the restaurant, I decided to cross over to eat at Central instead. There really was nothing about the place that would really entice you to walk in. It looked just like any other little eatery but with a weird French sounding name and there was certainly no Char Siew in sight. 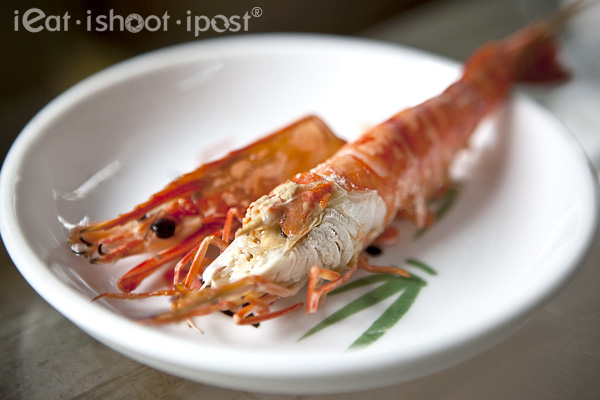 It was Damien who eventually got me to have lunch there one day. He was absolutely raving about it. The one dish that he mentioned again and again were the BBQ live prawns. Now, when it comes to live prawns, my favourite way of eating them is just plain steamed with black soy sauce and cut chillies. I always felt that BBQing the prawns made them a tad dry, although I loved the smell of the char grilled prawn shell.

It was when we started eating the prawns that I realized that we were onto something. The restaurant owner, Mr Andy Lim, came out to tell us that he only brings in 1 kg of these prawns everyday. They were specially ordered from a reliable supplier and delivered live everyday. These weren’t your usual everyday tiger prawns which are reared in a pond. These are reared in the sea and they were not easy to get.

Chef Andy then told us that each prawn took one minute to cook. First they were boiled in seawater for 30 seconds, then brushed with oil before grilling over charcoal. The oil dripping onto the charcoal produces smoke which flavours the prawn and the slight charring of the legs and shell gives it that crispy charred smell which what we all love about BBQ seafood.

When prawns die, enzymes from digestive tract start to digest the prawn immediately. Thus, the way to tell if your prawns are live or not is to see if the cephalothorax (head and chest) portion of the prawn stick firmly to the tail (abdomen). With dead prawns, the head comes off easily because as soon as the prawn dies, its digestive enzymes quickly eats though the organ where they are stored and they start digesting the rest of the prawns. This explains why bad prawns are mushy. This organ is located between the head and the tail and is the part where all yellowish grey stuff is. As you are well aware, this is the tastiest part of the prawn as it is made of the liver and pancreas. This explains why you always need prawn heads make the prawn stock for your Hokkien Mee or Prawn Noodles.

With the live prawns here, you can easily take the shell off the head and the body would still stick firmly to the tail portion. You don’t really need any sauce for these. Just enjoy the natural sweetness of the prawns with that smokey seawater taste. 4.25/5 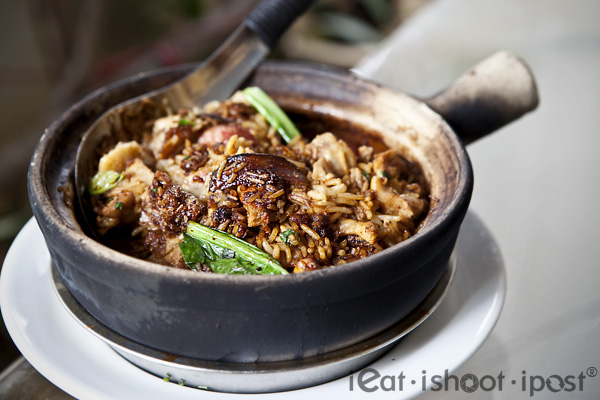 The other signature dish here is the claypot rice. When eating claypot rice, you really have no choice but to wait at least 20 minutes. If you eat claypot rice that is served to you in five minutes, that just means that they just put cooked rice into a claypot, pour some soy sauce and cooked chicken meat over it, quickly heat the claypot to char the rice and serve it to you.

A proper claypot rice must be cooked from raw rice to which chicken stock is added and brought to a boil. It should be cooked over charcoal and the claypot should be old enough so that there are small cracks through which the smokey charcoal flavour can seep into claypot to impart the smokey flavour to the rice grains. The other important ingredient is the rice and here is where the claypot rice at Le Chasseur distinguishes itself. Instead of using normal white rice, they use a good quality basmati rice so that the grains are light and separated when cooked. This gives it an excellent texture and bite. Make sure you stir the rice properly so that there is a bit of salted fish and crunchy burnt rice in every bite. Definitely worth eating. 4.5/5 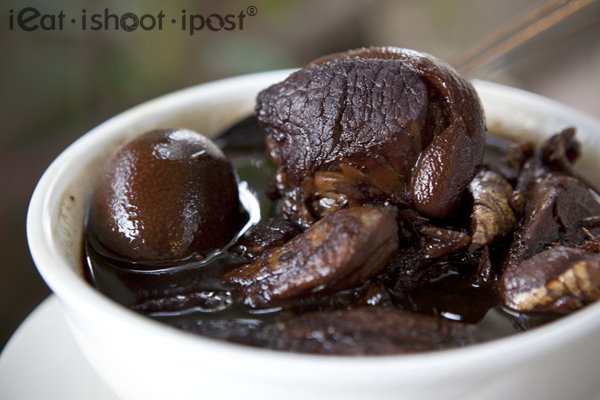 Fans of Ter Kar Chou (Pig Trotter in Black Vinegar) can rejoice that this is one place where you can enjoy this dish. Quite a few readers have asked me where they can find this particular dish and up till now, there wasn’t a place I could recommend. This dish is often eaten by women right after childbirth because it is believed that black vinegar is good for ridding the body of old blood and ginger is good for getting rid of gas and bloatedness. For those of us who don’t have the privilege of giving birth,this might not be a dish you get to eat often. I was thus quite surprised at how Damien, Cactuskit and Sumosumo were raving about the dish. Well, Cactuskit has four kids and he used to cook this for his wife during confinement, so he I can understand, but Sumosumo and Damien? Anyway according to our Ter Kar Chou connoisseurs, the version served here is pretty darn good. The balance between sweet and sour is just nice, the pig skin meltingly tender and the ginger sucks pretty good. 4.5/5 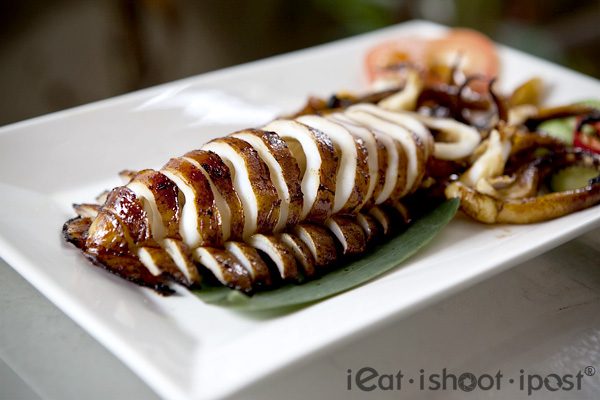 Now, the prawns take one minute to BBQ, but if you want the BBQ cuttlefish, you will have to wait at least 15 minutes. That is because you need a slow fire to ensure the cuttlefish does not get tough. Eaten with just the homemade glaze, you get to enjoy the natural flavour of the cuttlefish. I would have liked the glaze just a little sweeter though. 4/5 Being Teochew, Chef Andy loves his Tau Suan. So when he makes his Tau Suan here, he wants to ensure that the split mung beans are not too soft or too hard. In order to do that, the beans are first steamed and then kept in the fridge until you order it. When the order comes in, he would make the soup with gula melaka and mixe the beans in. Each portion is measured properly so that you get a good amount of beans in each bowl. Then the You Char Kway are toasted till crispy before serving. I don’t know of any other place that serves Tau Suan which is made ala minute. 4.25/5 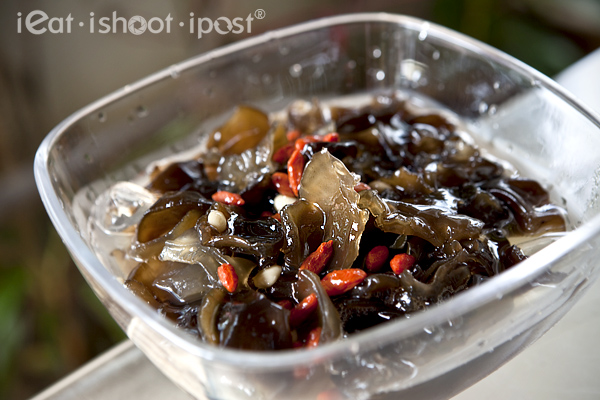 Finding gems like this is what the blog is all about. The Chef is passionate and a bit uptight about doing things his way, the food is great and the prices are very reasonable. I visited the restaurant twice. The first time with Damien and subsequently we organized a makan session for 15 kakis. I can confidently say that most of our kakis are already planning their return visit. To be honest, not every dish was great. The KL style Hokkien mee which had oysters in it was disappointing as it lacked flavour and the noodles were mushy. The oatmeal tofu was forgettable and the Lotus root soup was nothing to rave about. On the other hand, the Salted Veg Duck was a 4.25/5 and the Sambal Eggplant was a 4.5/5, but the post was already getting quite long so I did not feature them. So definitely, there are many more hits than misses and with 160 items on the menu, it looks like it is going to take a few more visits before we can satisfy ourselves that all the gems have been uncovered!

Oh, and if you are wondering about the name Le Chasseur, the story goes like this. The owner, ran a restaurant of the same name in Mauritius and when he returned to Singapore, he decided to use the same name. Le Chasseur means “The Hunter” in French. Owner Andy Lim is extremely friendly, so when you visit, just mention you read about him from the blog and he will be more than happy to give you a running commentary on each dish! 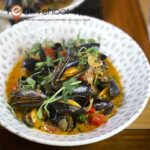 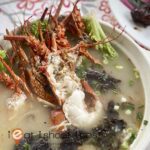 I patronised this stall for dinner last night. The food is average and I am surprised at how some people can rate it so highly. Essentially, it is foodcourt fare at restaurant prices. The claypot rice cannot compare with that sold at Chinatown and Geylang. The ingredients are so sparse. Only chicken, Chinese sausages and a sprinkling of salted fish. No mushrooms! The pig stomach soup cost $17 for such a small serving. I can get better ones at some other foodcourts, eg the one at I12 for $5.50. Even the tau suan which some people raved about is no big deal. There are many better ones elsewhere, and cheaper.

How can it receive a 4-star rating? To me, even a 3-star is a challenge. I will never patronise it again.

The review was done a few years ago when the restaurant was still located opposite Central. Things may have changed since. Thanks for your feedback! 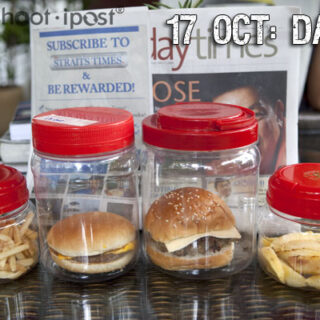 ieat's Experiments
How long can you keep a McDonald’s Cheeseburger and fries in the tropics?