How long can you keep a McDonald’s Cheeseburger and fries in the tropics? 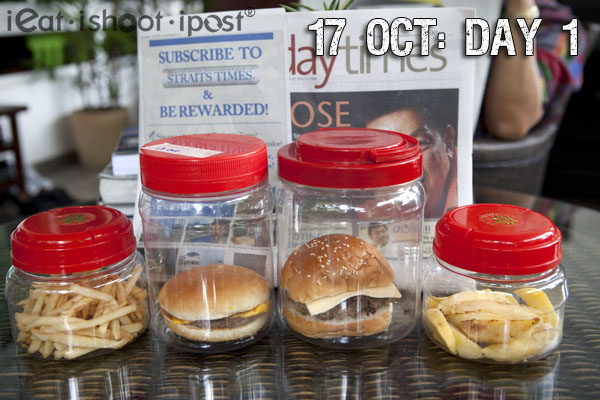 I have been very intrigued by the urban legend that a McDonald’s cheeseburger and fries can be kept indefinitely. Of course, for a medical practitioner, our advise to the general public is that we should limit our intake of junk food, but the reason for it is that most fast food contain too much saturated fats, salt and sugar and should be taken in moderation only. But over in the States, there seems to be quite a few people who are downright against the golden arches. The arch enemy of good olde Ronald McDonald must undoubtedly be a guy named Morgan Spurlock who made a film called Supersize Me. In the film he ate nothing but McDonald’s for one whole month. At the end of the month, his cholesterol levels was sky high and he gained around 11kg (total 95.5kg). Considering the amount of sugar and fat in fast food, I find this quite believable.

However, recently I came across this lady who claimed that she has as a 12 year old McDonald’s hamburger which looks very much the same as the day she bought it. Ok, like most people, my first reaction was that it must be due to the amount of preservatives they add into fast food. So, ok it might be plausible. But then someone mentioned that it would not happen here in Singapore as our heat and humidity here would certainly break any food item down quickly. You know me, I just had to see for myself if a cheeseburger could really last that long. 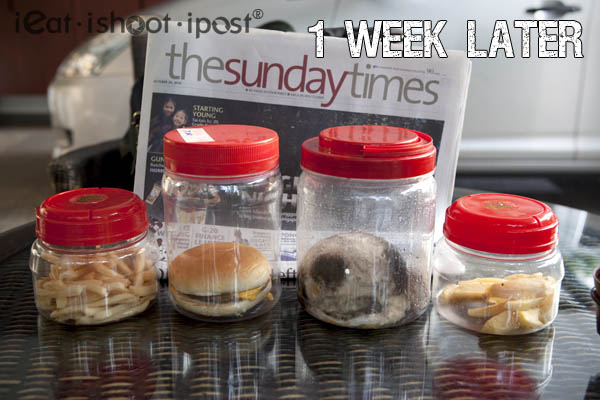 My experiment is by no means a proper scientific experiment. However, I did try to make it more scientific by adding a control hamburger which I made from minced beef, sandwiched between a store bought bun and a slice of cheese. For the fries, I had some potatoes which were baked in the oven with a coating of olive oil. The four items were placed in jars which have been washed and dried and left on my bookshelf. Every Sunday morning, I would pick up my Sunday papers and pose it with the four containers. This way, you know exactly when I am holding the burgers hostage. I am now posting my findings for the first four weeks of the experiment.

My initial reaction after week 1 was “Wow! Look at that, it seems like the legend is true after all!”. My homemade burger started to get mouldy by day 3 while some cloudy white liquid started to pool in the jar with the potato wedges. At this stage, the McD Happy Meal was still very happy. If you had presented both meals to me without telling me that they have been sitting out on a shelf for 3 days, I would happily eat the McD burger and fries. On the other hand, I wouldn’t touch my homemade burger and potato wedges. By the end of the week, the ieat homemade burger was completely covered with mould. 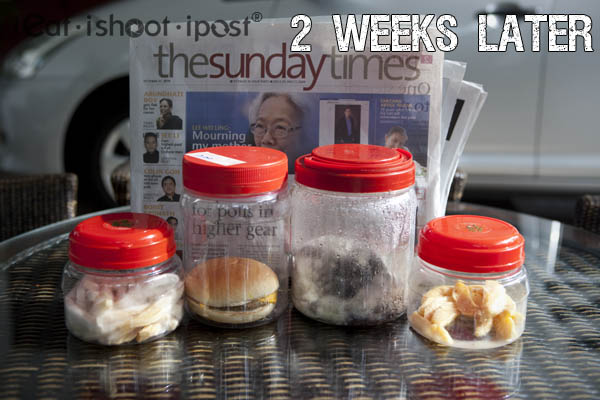 For those of you who really wanted see that the McD french fries could last forever because you want to keep a whole box of it in your bombshelter…….. sorry. It only lasts around one week in our tropical weather. By the end of Week 2, nice furry white mould has started to cover the fries. The cheeseburger was still pretty much intact though and if I heated it up in the microwave and gave it to you, you would probably eat it. I would also give you my clinic namecard, so that you know where to find me the next day. Just in case. Over in the ieat homemade burger jar, the mould are happily eating my obviously very delicious burger and producing lots of water vapour. The potato wedges are still not mouldy but the pool of liquid at the bottom of the jar looks absolutely disgusting. 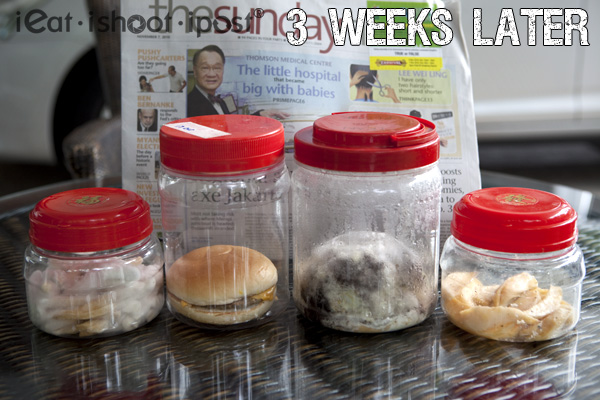 By the end of week 3, my McD french fries were completely covered with mould. The ieat hamburger had started to shrink a bit, but the potato wedges actually don’t look too bad except for the pool of liquid in the jar which is now lesser. Although the cheeseburger still looked ok in front, I noticed that some mould had started to develop on the bottom of the burger, just a small colony of commando mould who have broken through the burger’s enhanced defenses. 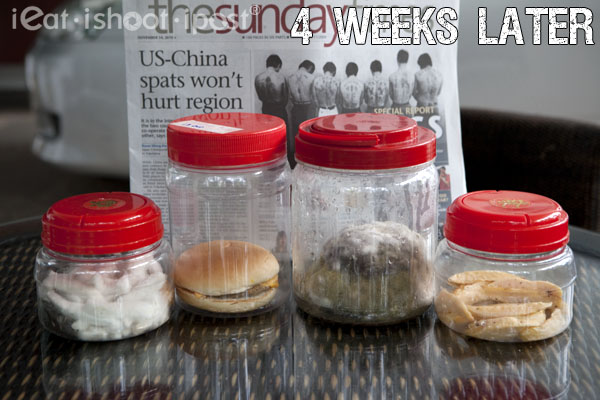 At the end of one month, my ieat burger is looking like a monster from a sci fi movie. The cheese burger looks pretty alright from the top, but don’t be fooled by its outward appearance. 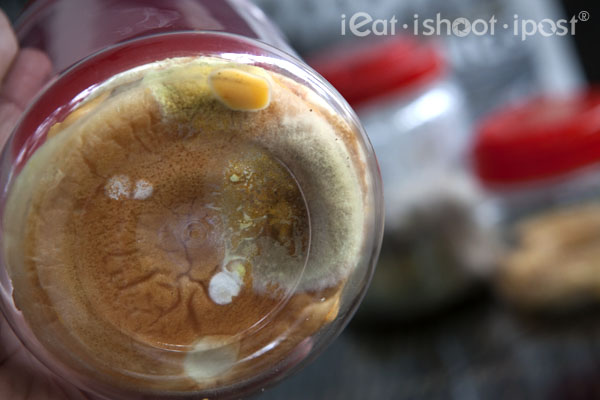 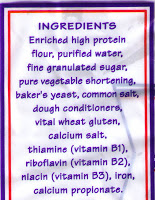 As you can see, mould has broken through the defenses of the bun and started a colony. From our experiment, we can see that the bun from from my homemade burger which was bought from a local bakery got mouldy by the end of the week while the one from McD’s lasted at least 3 weeks before getting mouldy. So there must be some form of preservative that helps to retard the growth of mould in the bun. Looking through the ingredients list of the cheeseburger bun, the most likely preservative responsible for this would be calcium proprionate. Calcium proprionate is widely used in commercial baking as an additive to retard bacteria and mould. As far as we know, it is non-toxic. I picked up some hamburger buns from the supermarket shelf and note that this additive is also present in the buns we buy from the supermarket. So I don’t think the people at McD’s actually tried to make a super-longlasting bun that could keep forever.

I think the reason why the cheeseburger took so long to become mouldy is a combination of the presence of calcium propionate in the bun as well as the fact that they bake the bread just before serving and this removes moisture from the bun. Both these factors can explain why the bun took a longer time to develop mould.

In terms of why the burger pattie hasn’t turned mouldy, I think it is because it was well cooked to begin with, so there was little moisture in the pattie. The salt and other seasonings contained in the pattie also help to preserve it to a certain extent, very much like how we can preserve Bak Kwa and other dried meats. By four weeks, the fries were completely covered with mould. Amazingly my own oven baked potatoes are still pretty mould resistent. It is probably due to the coating of olive oil over the fries which is keeping the mould from growing.

Our experiment shows that a McDonald’s Cheeseburger and French Fries get mouldy just like our homemade burger. The fact that McD’s food will rot has been demonstrated by other bloggers on the internet. One of the most informative one is from Serious Eats which you might want to check out.

There is certainly no problem eating food that is a few years old as long as it is preserved properly. We do it all the time when we eat canned food, drink wine or dried fruits. Traditional methods of preservation have been used for a long time and so people tend to trust them. But they are not without their problems, for example, salted fish has been linked to nasopharyngeal cancer. The newer preservatives that are used in modern processed foods are not without risks. Borax, which is used in Chinese lamian is banned in US and Indonesia because of its link to liver cancer.

In the end, I don’t think McD’s food are any different from all the other fast food and processed foods. My experiment, at least, debunks the myth of the everlasting McHappy meal. That doesn’t mean I am going to allow my kids to eat at McD’s more often, but at least I know that there is no truth that a McD burger and fries can last forever.

1. Thanks to our reader Hwee Peng who happens to be a microbiologist and expert in food preservation for helping me with the article.

2. I don’t own any McDonald’s shares and have not receive any benefits in cash or in kind for writing this post. 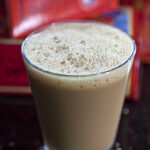 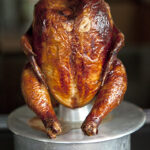 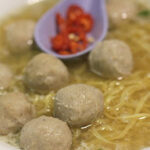 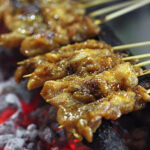 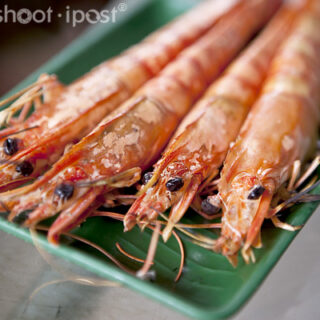 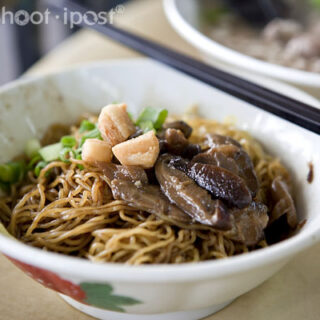