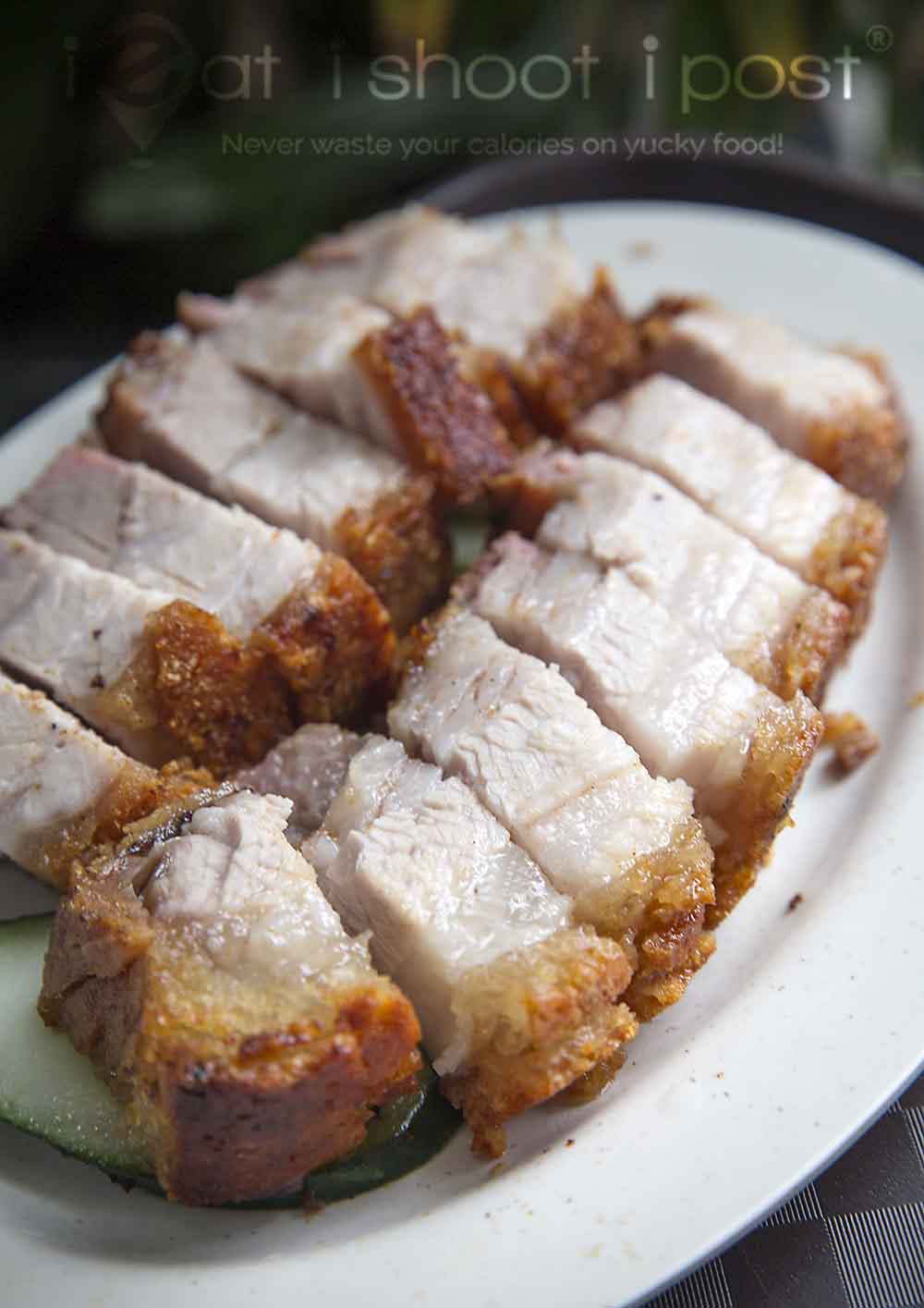 Let me give you the bottomline right here at the top.  If you love Sio Bak, you must head down to this particular stall to try their Sio Bak and then write to me if you know of any hawker stall that can make a Sio Bak better than this stall.

As a western trained Chef, Martin learnt the art of the Cantonese Roast by observing the masters and then developed his own technique to produce a Sio Bak which is quite unlike what you normally find at other stalls.  The rind is shatteringly crisp while the meat and fats are as soft as butter. He managed to do this by making sure that the skin is paper dry when it enters the oven and he roasts the pork over a longer period of time in order to breakdown all the connective tissue.  The roasting process itself takes 1 hour 45 mins which is longer than most other stalls. It was easily the best Sio Bak I have eaten in recent memory.   4.5/5 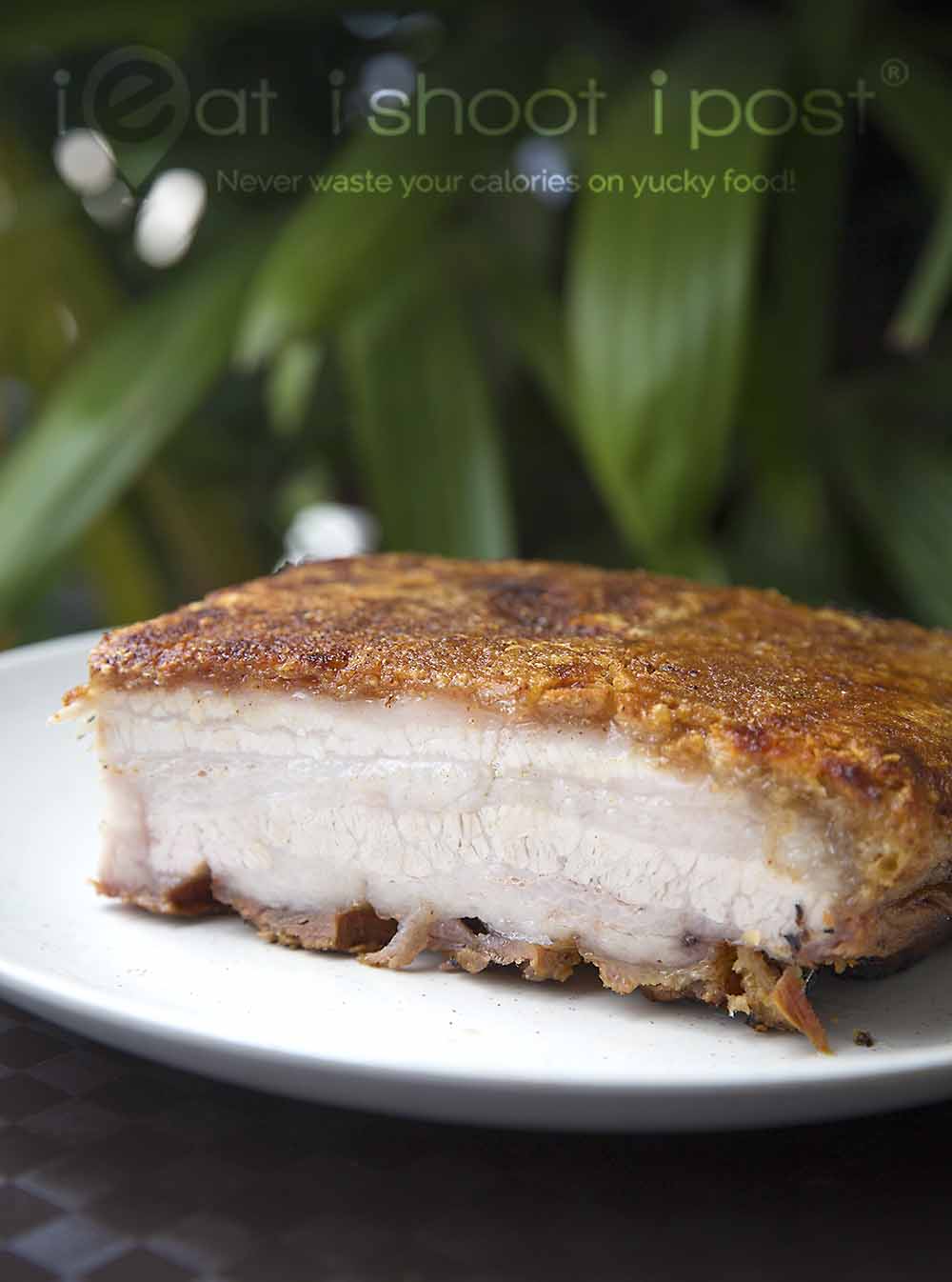 Now, there are caveats to this claim.  Firstly, you really do need to go on a perfect day.  The perfect day being that it is bright and sunny and the Sio Bak has just come out of the oven.  If it rains, the humidity will affect the crispiness of the rind.  The second caveat is that in any slab of pork belly, there are portions that will be fattier than others.  If you are fortunate enough to get a slice that is similar to the one shown on the photo, then you will be in Sio Bak heaven.  Otherwise, you might write in to complain that I have over-rated the Sio Bak. 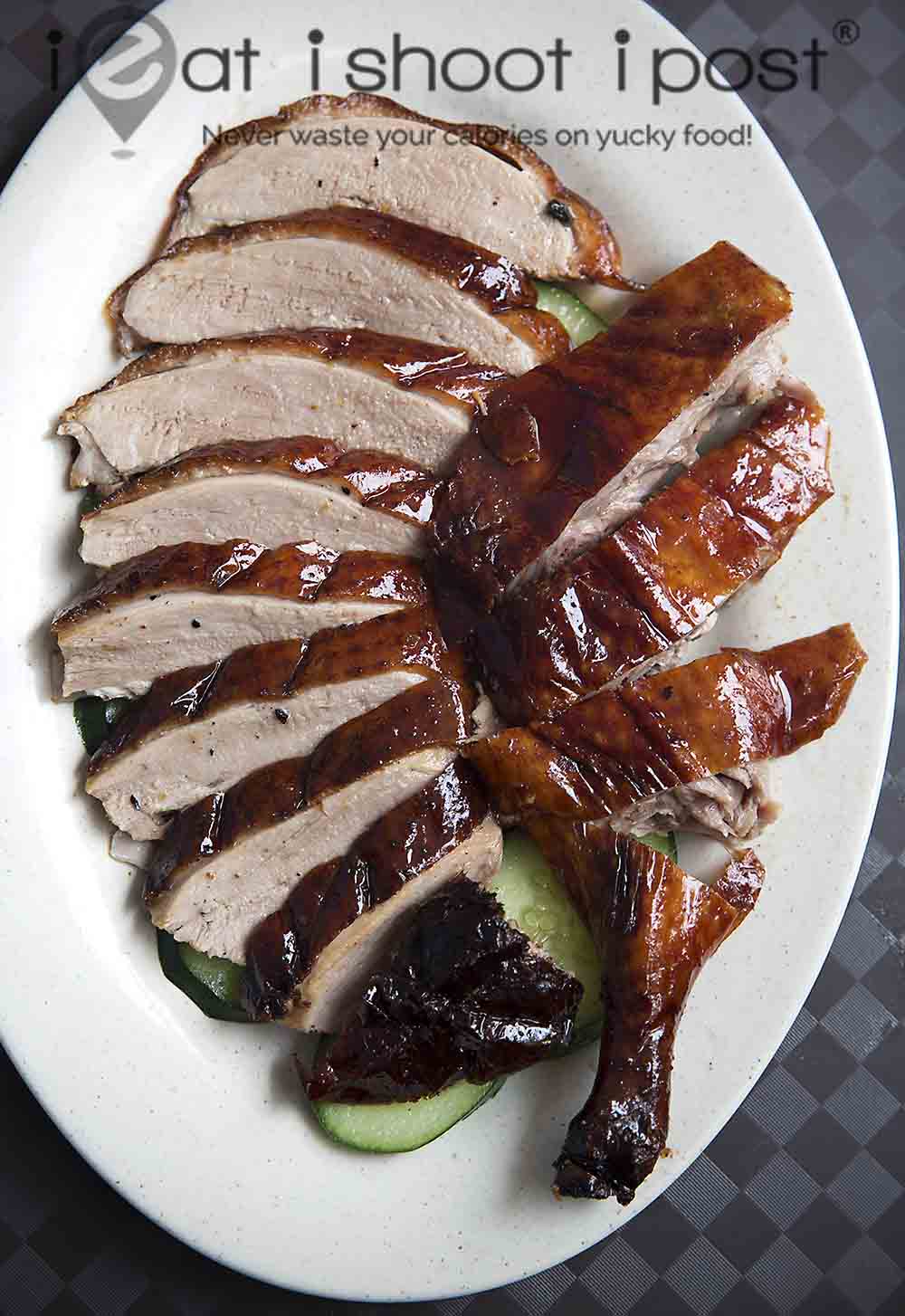 I have visited this stall on two occasions.  The first was during a rainy day and so I can attest to the fact that Sio Bak tastes much better on a sunny day.  I have also tasted the roast duck twice.  The first time, the duck was so tender and sublime, the second, the duck was a little tough.  I would have given the roast duck a 4.25/5 on the first occasion but only a 4/5 on the second.  Chef Martin tells me that the quality of the duck varies from day to day and that since he had just opened his stall, he doesn’t have the buying power to ensure that he only gets the best ducks.  That will only come later when his business picks up.  I sure hope it does, because I did really enjoy the roast duck during the first visit! 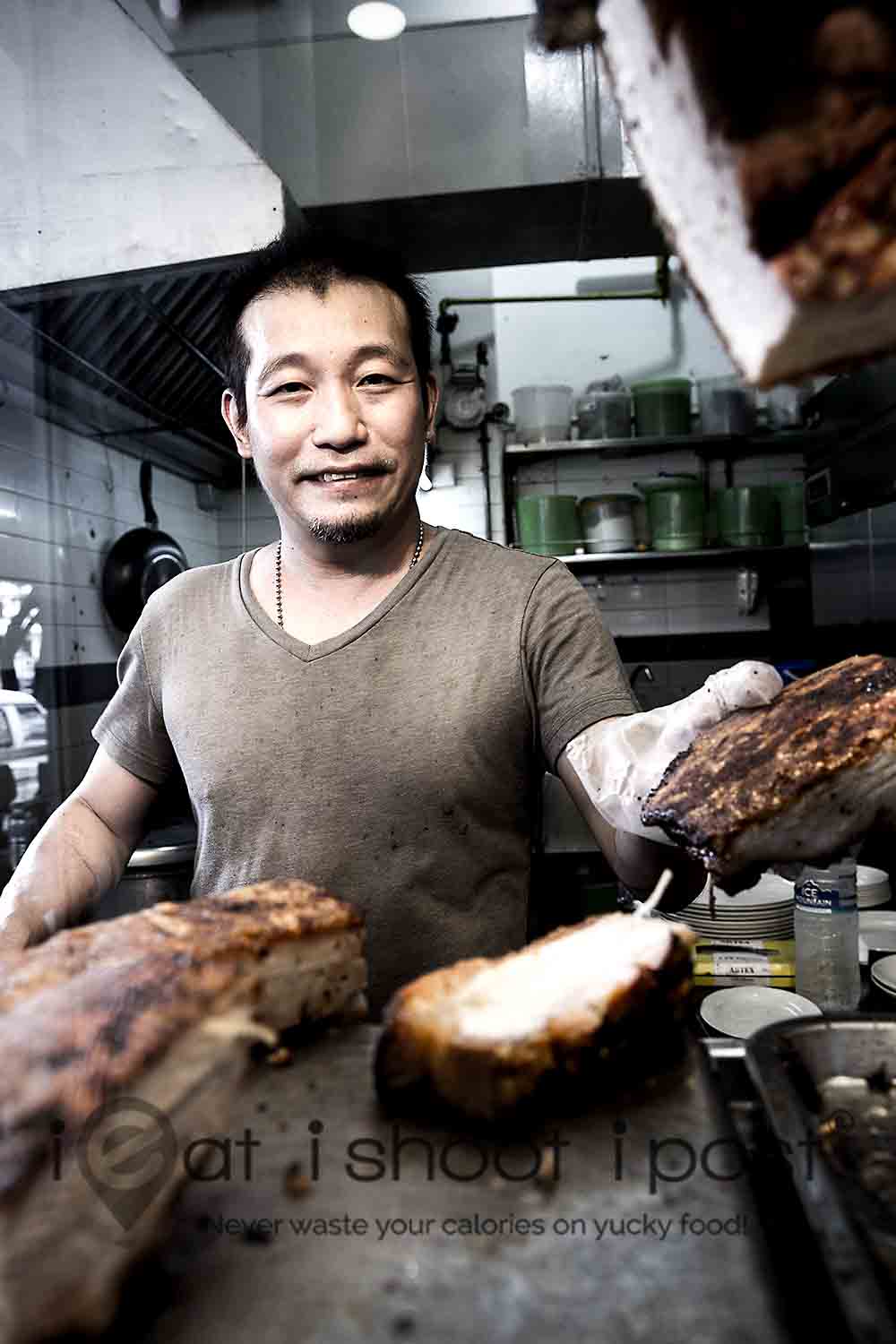 I have heard about Chef Martin’s Sio Bak for a while now but it was only after he moved three times that I finally managed to track him down.  I first learnt about him from Uncle Smart when his stall was located in Tampines.  It was then known as Cross Way Bay and he made quite a stir amongst the online foodie community.  Then suddenly he closed his stall and moved to Johor Bahru where it was known as Tong Tong Hong Kong Delicacy.  He tells me that the pork there was way better than what we can get here, but there wasn’t just enough human traffic to make it a viable business.  So, he moved back to Singapore and opened a stall in Bukit Batok and renamed it 88 Hong Kong Roast.  After a few months, he left and is now roasting at the current location in Jalan Besar.

Hands down the best Sio Bak I have eaten for a while.  The only thing that is holding Chef Martin back is the quality of the pork.  He tells me that if he could get his hands on Malaysian pork, the Sio Bak is even better!  So, until AVA allows Malaysian pork to be imported into Singapore, I can only imagine!

PS:
While you are there, you can also check out the Malaysian Fried Porridge in the same coffeeshop! 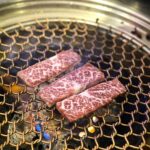 I ate here after your Instagram post. Woah. I was in the queue for 20 minutes on a Saturday!!~ So many people ordering large takeaway orders. Chef was super nice though and very accommodating to his customers. I am not the biggest fan of pork belly, but it was very good here. Crispy skin and a nice tender, but toothsome chew.

They have not lifted the ban since the Nipah virus outbreak years ago.

Hi. In what kind of roasting equipment is Sio Bak cooked? In the Philippines, we call that Liempo, (marinated in a simple mix of salt, calamansi and garlic, roasted over charcoal

He does it in a gas oven.

Here in HK, if you go “斩料” i.e. buy roast meat from a roast shop, their most popular and expensive cut for sio bak or siu yuk is not the belly. It is the ribs, one rib of 10″-12″ will set you back easily HK$100-120 (SGD$18-20) it is the best and most flavorful part. Crunchy skin, fats, tender meat and that piece of bone to nibbles on! And a swig of beer to top it off! Heaven! The belly is nice but tends to be a little too fatty.

That sounds amazing! Wish I could fly there now to experience it!

Maybe Dr Les can try roasting with ribs instead

I have to say that yes, you have to catch this guy on a good day. The first day I tried the sio bak is was ok, but the second time was otherworldly. Very crunchy. The char siu not bad and the duck was ok. I did enjoy eating at this little place. People here get really pushy in line though, so make sure you stand your ground!

I have to say this is by far my favorite roast meat in Singapore! For me, always 5/5 every time I visited. But it’s closed/moved again. Do you know where they’ve moved to?

Yes, I heard he moved to a coffeeshop nearby. Will update soon.

Oh thank god! Was afraid they move back to JB! Love your work Lesley 🙂

It’s not at Foch Road anymore. Anyone has any idea where is the stall located now ?

Hmmm, seem like everyone found him missing. Went there today, followed the banner that was hanging high up indicating where he moved to; alas, the coffee shop below the second banner was empty. Seem to be under renovation. This is at Tyrwhitt Road just next to Blanc Inn. Hope to return next week to check it out. Will he be there?

Should by open at Tyrwhitt road! 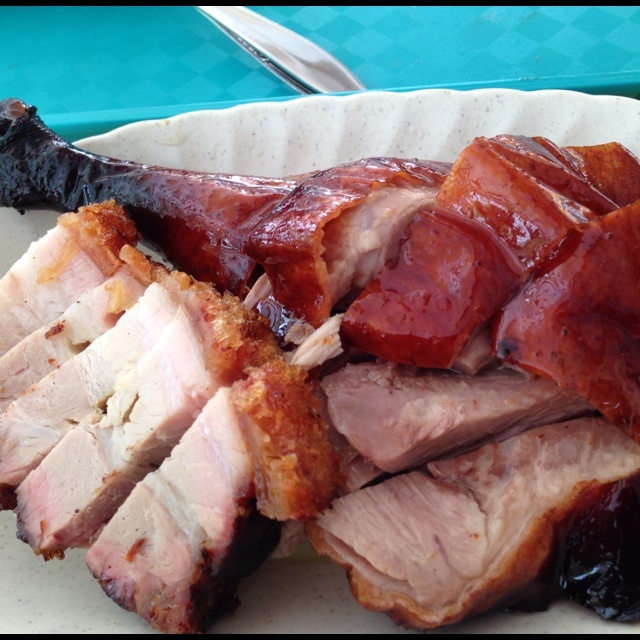 I’ve eaten from 88 Hong Kong Roast thrice. I’d say my all time favourite sio bak and roast duck is from Soon Heng HK Roast at Blk 22A/B Havelock Road hawker centre who were originally from the small hawker centre at Blk 86 Zion Road which was demolished so they had to relocate to Havelock Road. I have been patronising Soon Heng since 2004 and the cut of sio bak has never once disappointed me; crispy rind, pretty lean but thick juicy cuts with porky flavour and right texture which can easily rival what you get at restuarants. Usually order roast duck drumstick with sio bak and rice which currently cost me $7. The roast duck drumstick is very well roasted with all the fats melted away during the roasting process. I find their char siew which is not the sweet type to be average.

Yes, this one not cheap and good. Its good not cheap.

I brought my wife here last month after reading your post. Ordered the siopak and char siew on a hot sunny day. I liked the char siew but I felt the siopak is quite tough especially on the bottom part. The skin crispness was not so balanced. My wife, who was a fan of sio pal, said she found no so good. And she told me there is better siopak.

I initially don’t believe her. But after she brought me to S11 coffeeshop near Bishan J8 to try its siopak. I totally agreed with her recommendation.

The stall is not v popular so there is no need to queue. But the siopak is definitely better than 88 HK Roast. The skin crispness and fat portion is very balanced. Maybe you can take a trip there one day to taste to believe. 🙂

Thanks for the recommendation! I shall put it on my to eat list! 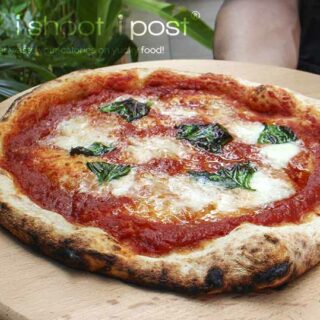 THE MUST TRY LIST
Ashino: The Season for Kai