The ieat Global Crab Fest:: Featuring Crabs from around the Globe! The ieat Global Crab Fest:: Featuring Crabs from around the Globe! – ieatishootipost

Our next makan session is probably going to be the most interesting one to date. 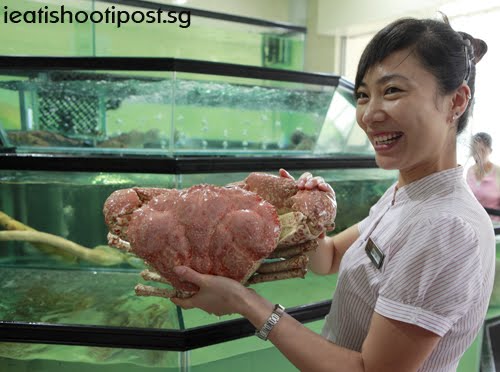 First up is the Tasmanian King Crab. I first met with this beastie during my Med School days in Sydney. In fact, when I got my first paycheck, half of it went to paying for such a crab for my parents and in-laws. (Yes I got married while still a student) This is one very big crab and the beauty of it is that it contains meat the size of a chicken breast and it is still sweet and delicate. When you look at its face, you realise that the guys who came up with “Predator” must have eaten one of these creatures before the movie.

It wasn’t cheap then and it sure isn’t any cheaper now. These crabs were much bigger years ago, but I have noticed the last time I was back in Sydney that they are much smaller now. The one in the photo which is taken at Chin Huat is only about half the size of those we used to see in the Chinese restaurants in Australia.

It certainly is the crab to order for that special occasion. I think my mother-in-law might still have the shell of the monster in her home somewhere! 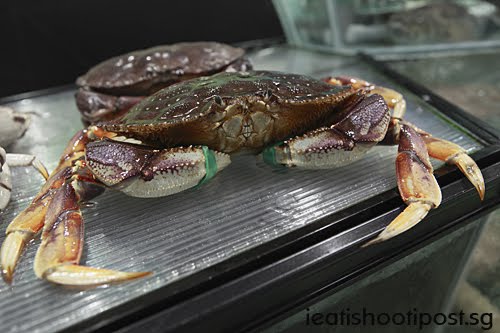 I have already blogged about the Dungeness Crab in my last post on Chin Huat Live Seafood. The Dungeness Crab is representative of Crabs from North America and they are the common species being eaten in the West Coast. 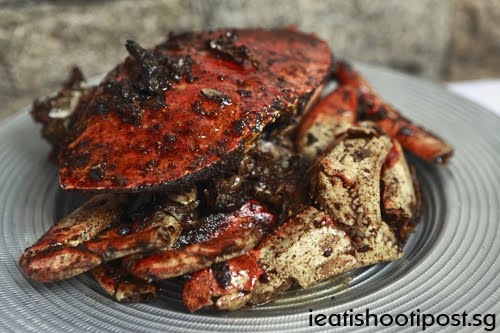 I had presumed that a crab with such a nice delicate flavour should be best eaten steamed but I was quite pleasantly surprised that it actually tasted very good when done Black Pepper style. The crab actually does affect the taste of the Black Pepper sauce, making the sauce just that much sweeter. This is one dish I would make sure is in the Crab Fest. 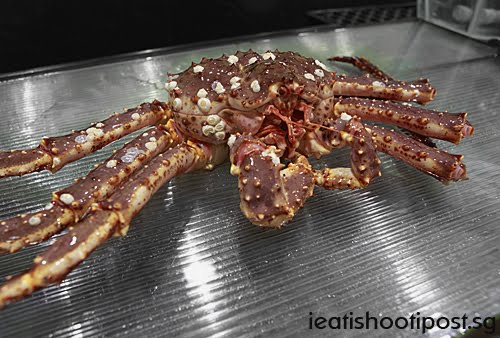 Those readers who have watched “Deadliest Catch” would be familiar with the Red Alaskan King Crab. Alaskan King Crab fishing is arguably one of the most deadly jobs in the world. These men brave the treacherous waters of the Bering Sea in order to bring the crabs onto our plates. It’s no wonder it costs so much. 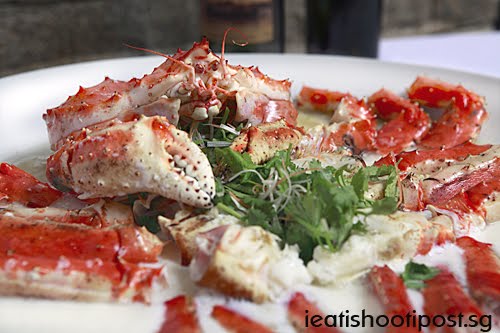 During the peak of the season which is from October to December, many people would tell you that the flesh of the Alaskan King Crab is the sweetest of all the crabs, which is why it is best served just steamed with egg white. Most of the flesh of this crab is in the legs and each leg contains meat about the size of a Mars Bar. Unlike other crabs, you don’t need a nutcracker to get to the flesh. Instead, they have a purpose built pair of scissors to cut the plasticky shell.

We should be well into the season during our Crab Fest, so this crab should be on the menu. Incidentally, you might have noticed that this crab is currently the mascot for the blog! 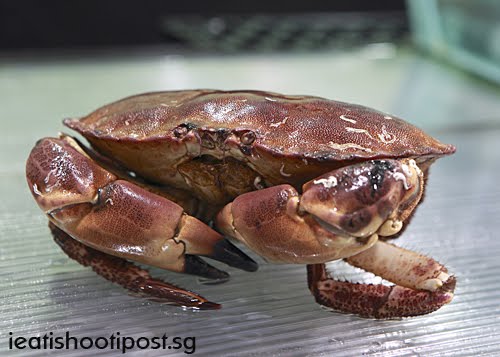 Representing the UK is the Cromer Crab which is one of the common species of crabs that are caught in the waters of Britain and the Mediterranean. This crab is recognized by its black tipped claws and it is said that those that are caught off the coast of Norfolk have the sweetest flesh because of the chalk shelves there influencing what the crabs actually eat. 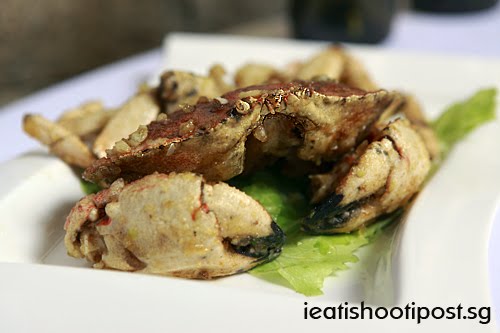 We had this crab done “Butter Crab” style as well as with Ginger and Shallots. Both were very good but if I were to choose one, it would be Butter Crab. Unlike the Dungeness Crab, this crab actually has quite a good amount of meat in its claws. The flesh is very close to Dungeness crabs and the part I like best is the legs which are quite substantial and very sweet.

This crab is definitely on the menu. 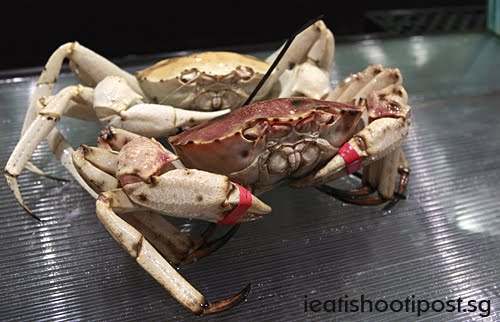 For our next species, we once again go Down Under and we will have to go deep down under, like 1000 feet deep to find these crabs in the cold Antarctic waters off the Southern Coast of Australia. The Snow crab is also known as the lucky crab (lucky for the person who catches it, unlucky for the crab) and because it lives in such deep unpolluted waters, the flesh has an exceptional sweetness to it. 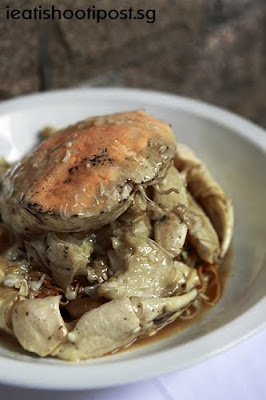 We had this crab stir fried with Ee Mee which I thought was good but I felt that Bee Hoon might have been better able to absorb all the sweetness of the crab. 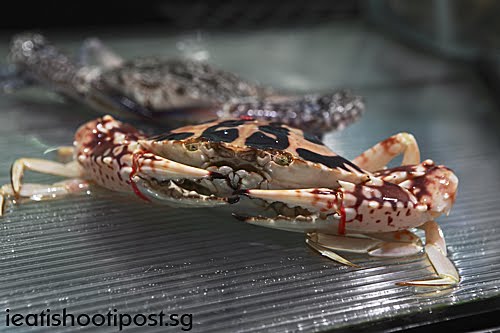 The swimmer crab can be caught right here in Singapore and is one of those really underrated crabs. My dad used to love these crabs plain steamed as the flesh is very sweet. However, they are pretty small, so there is not so much meat in each crab and often when you buy these from the market, most of the flesh has atrophied (shrunken). However, the ones we had at Chin Huat were very good and the flesh is solid. 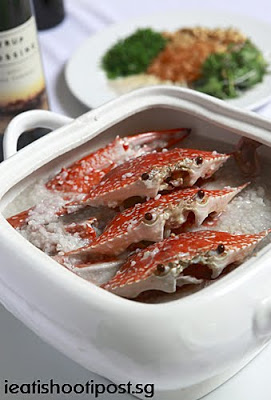 We had this crab in two styles. The first is crab porridge and the second is steamed with ginger and shallots. I don’t quite fancy the crab porridge, so we might get them do to this in another style for the crab fest. 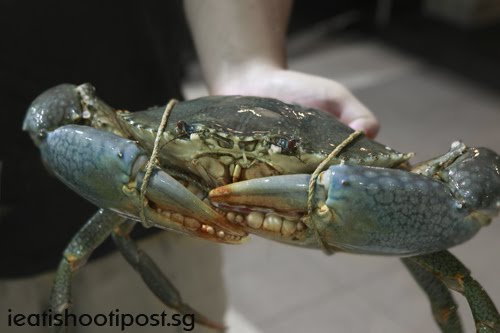 Finally, we get to the crab that really needs no introduction. The Sri Lankan Crab is also known as the Giant Mud Crab and is found in the estuaries and rivers of Sri Lanka. We do have a local mud crab that can be caught in our waters but they are only half the size. The smaller ones are often known as Indonesian Mud Crabs and are often sold in supermarkets at $10 for 3. Sri Lankan crabs on the other hand costs around $38/kg. 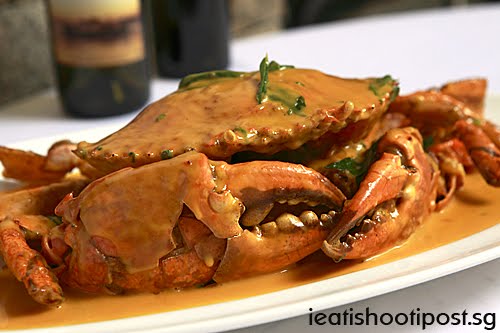 We had Golden Prawns during our Makan Session which I did not think much of. However, when you cook Sri Lankan crab with the same sauce, somehow the sweetness of the crab magically turns the sauce into something quite addictive especially when eaten with the fried Man Tou. This will definitely be on the menu.

The crab fest will be in the first half of November and I will announce the registration details in the blog soon. I have another two posts coming up soon on crabs so October and November will be crab month! There will be a poll on the most popular crab dishes among our readers, so I am tring get nominees for the top ten list. Will the old favourites like chilli crab, black pepper crab triumph or will the new and trendier dishes like Salted Egg Crab and Crab Bee Hoon take over the crown?

Do write in to nominte two of your favourite crab dishes! And even better if you also tell us where you can find the best crabs around!

PS: recognize where I got our latest Mascot from?

Make sure you join our facebook, forum and twitter so that you can get the latest updates on the crab fest!

Uncategorized
Feedback on our new banner
Next

Advertorials
Nestle Omega Plus Acticol: You are what you eat, so eat wisely