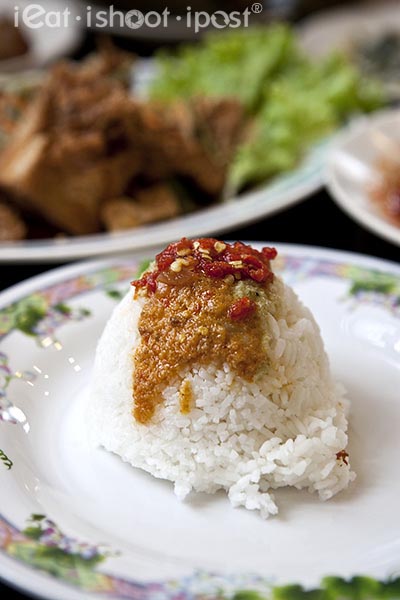 We all enjoy Nasi Padang, but how much do we actually know about it? I would be the first to admit that I am guilty of calling any stall that sells rice with Malay style curry dishes Nasi Padang without much thought. But that is not entirely inaccurate as many of the dishes that are characteristic of Padang cuisine has become very much a part of Singapore food culture.

The other problem I have with Nasi Padang is that out of the 50 or so dishes that are served, I always end up trying the same handful of dishes. I guess I am the type that prefers to play safe and order something I know I like rather than taking the risk with something new. That’s exactly what I did on my first visit to Rumah Makan Minang.

However, I came away with the same burning questions. Just what is Nasi Padang? What are the dishes that are quintessentially Padang and which are Singaporean? With these questions in mind, I organized a return visit to Rumah Makan Minang, this time with some help from the owners of the stall to try to learn something about Padang food.

The most famous dish that originated from Padang is probably the Beef Rendang. However, this dish has become so popular locally that it has become become integrated into our culture. So much so that most people probably just assume that it is local Malay cuisine. But if you ask the Minangkabau people, they would tell you that the Beef Redang was invented by the Minangkabau.

The Minangkabau are the inhabitants of the region of West Sumatra whose capital is Padang. Legend has it that the Minangkabau (lit Victory over the Buffalo) are so named because of a famous battle between their tribe and the forces of the Majapahit empire. Instead of an all out war, both sides decided to send a water buffalo to settle their dispute. The prince of the Majapahit empire sent a huge beast while the Minangkabau sent a hungry buffalo calf with knives strapped to its horns. During the ensuing battle, the baby buffalo went straight for the udders of the big buffalo and pierced its belly while looking for milk!

So the buffalo is a very significant animal for the Minangkabau and it is reflected in the architecture of their houses as well as in their food. Beef rendang is traditionally made with buffalo meat and its a dish that is often cooked during festive occasions. Traditionally, Beef Rendang is cooked for a long time until it is all dried up and can be kept for a whole month without refrigeration.

I was told by Hazmi that there are many styles of Rendang served in Singapore, but their version is close to the authentic Minangkabau version.. The recipe belonged to his grandmother, Hajjah Rosemah, who migrated from Minangkabau to Singapore in the 1940’s and started a Nasi Padang stall along Kandahar St. They then shifted to a rental coffeeshop in the 70’s where it was known as Nasi Padang Batu Nisan (lit Nasi Padang tombstone) because of its proximity to a tombstone maker. It was this stall that gave birth to Rumah Makan Minang, Sebar Menanti and Sabar Menanti II, all of which are located within walking distance from each other in Kampung Glam. Even Warung Nasi Pariaman, which is a stone’s throw away belongs to Hazmi’s Uncle!

I have always enjoyed Beef Rendang with nice, tender, melt in your mouth beef from Peramakan. However, I was told that authentic Beef Rendang is supposed to have a bit of a chew so that the flavour develops in your mouth. It is also supposed to be spicy as it is characteristic of Minangkabau food. So the Beef Rendang here tends to be more dry and chewy and the spices do pack a punch. Good for those whose palates are used to really spicy food. 4/5

Belado. Belado is essentially red or green chilli that has been roughly chopped, bruised and sauteed with onions and tomatoes. I guess its pretty much like a Mexican salsa except that it is cooked.

The spicy, tangy condiment goes really well with fried foods and they usually use Belado Merah (red chilli) for fish and Belado Hijau (green chilli) for chicken. One tip I would like to share with you is that the best time to eat Nasi Padang here is around 10am when the food has just come out of the kitchen. By the time I ate the Ayam Belado Hijau, it was already around 2pm, so the chicken was not freshly fried. Even then, it was very enjoyable. The marinade for the fried chicken is very good and the sweet and piquant Belado hijau complements it perfectly. 4/5

The other Belado dish that is famous is the Beef Dendeng Belado which is essentially Beef Jerky topped with Belado Merah. But if you are a little adventurous, I would highly recommend the Paru Belado (Beef Lung). Now, I know some of you might cringe at eating offal and believe me, I am not a big fan as well, but the Paru Belado here is fantastic once you get over the mental block. It’s crispy and has a nice savory beefiness without that awfully offaly stench. Actually it’s much like a beefy keropok! (fish crackers).

Hazmi explained that they have a special method of preparing the Paru. It is first sliced thin and then marinated and sun dried before deep frying! The marinade was superb at masking the otherwise strong smell of the beef lung, leaving only a nice savory, spicy, crunchy morsel which was nicely contrasted by the sweet and tangy Belado. 4.5/5

I asked Hazmi if he had a particular favourite amongst the kaleidoscope of dishes he makes everyday and without a moment’s hesitation, he said it was the Ikan Bakar. Although, Ikan Bakar is also a very popular Padang dish, the Ikan Bakar here has been modified such that it is unique to Singapore, or indeed to Rumah Makan Minang. The traditional Padang recipe is to grill the fish and serve it with kichup manis (sweet soy sauce) and chopped onions and chilli. Here the fish is first slathered with a thick and yellow spice mix before grilling and then the kichup manis and condiments are added. So you get a whole symphony of flavours from the pungency of the onions to the sweetness of the kichup manis to the brightness of the chillies balancing out the umami flesh of the Ikan Selar Panjang (Indian Mackeral). Again, something best enjoyed fresh out of the grill! 4.25/5

Botok Botok is one of those dishes that I would never have ordered by myself. This is essentially a piece of Batang (Mackeral) topped with a mix of coconut and herbs, wrapped in banana leaves and steamed. It’s like an otak otak but with the fish whole and separated from the rempah. The flavours are nice but I found the leaves a little grassy and difficult to chew. Still its something you might like to order just to try something new and different. 3.75/5

The one dish that I will always order whenever I am back at Rumah Makan Minang has to be the Tahu Telor. Firstly because their version is very very good and secondly, the sweet sauce that it is served with brings a bit of respite in the midst of the explosion of spices from the other dishes. Theirs is smaller in comparison with the Tahu Telor served in many other places and is quartered then fried such that there is more crispy bits to savour. 4.5/5 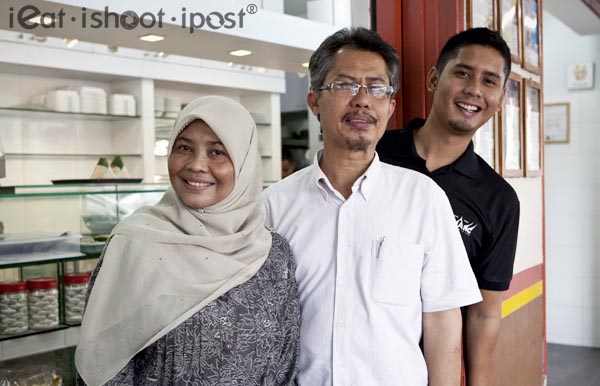 It is good to know that we will be able to enjoy the dishes of Rumah Makan Minang for at least another generation as the baton is gradually being passed onto Hazmi who gave up his job as an IT engineer to carry on the family tradition. Aside from renovating the restaurant and giving his restaurant a strong online presence, he is also in the kitchen getting his elbows dirty and learning all the recipes from his mom! So it’s great to see this restaurant bringing tradition into the 21st century while still celebrating its heritage! 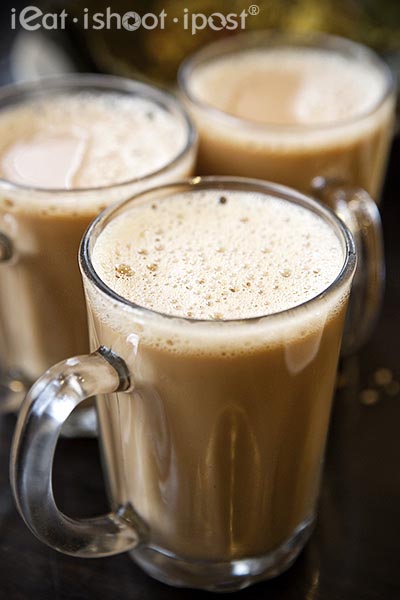 Don’t hesitate to order a cup of Teh Tarik to accompany your food while you are there. Hazmi’s father has represented Singapore as our Teh Tarik ambassador overseas on several occasions and so the Teh Tarik here is very good. The key is a very special blend of tea they use which is specially blended just for the restaurant. It has hints of rose and vanilla flavours so its fragrant while the astringency is nicely balanced with the condensed milk so that its smooth and brisk. 4.5/5

The legacy of Hajjah Rosemah and Minangkabau food lives on Rumah Makan Minang and it is good to know that there is a new generation that will take over the baton and bring it to the 21st century. It is no surprise that Padang food is so popular throughout Indonesia as well as Singapore and Malaysia. When you are really hungry, a plate of rice and accompanied by a few dishes will surely hit that gastronomic g-spot. 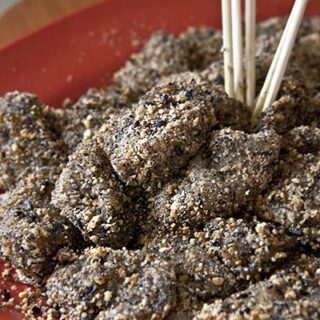 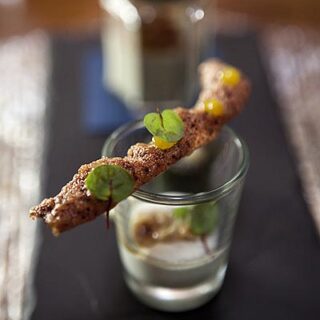