Pek Sin Choon Tea Merchants: Do you know your Bak Kut Teh Teas?

The history of Singapore’s Bak Kut Teh can be traced all the way back to the period before World War II. Actually, its origins could possibly pre-date the 20th century but I have thus far not been able to find concrete evidence for this. However, the oral history of Bak Kut Teh is still prevalent in our society and one very reliable source is Pek Sin Choon Tea Merchants which was founded in 1925.

The current boss of Pek Sin Choon is fourth generation Kenry Peh who recalls his grandfather, Mr Pek Kim Aw telling him stories of how he used to enjoy Bak Kut Teh in the Clarke Quay area before the War. In those days, our Bak Kut Teh culture wasn’t as well developed as it is now. It was simply a bowl of soup made from mainly pork bones which was followed by a cup of Chinese Tea to wash it all down.

The history of Bak Kut Teh has been very closely associated with Pek Sin Choon since the early days and they currently supply teas to 80 percent of all the Bak Kut Teh stalls in Singapore. If you have ever eaten Bak Kut Teh before, you would no doubt recognize the familiar packets of Chinese Teas that accompany your Bak Kut Teh.

These teas have been around for a very long time and has seen Singapore through the war, the merger with Malaysia, the subsequent separation, independence and all the way to the Gardens by the Bay. What might come as a very big surprise to you is that these teas are still hand wrapped in very much the same way right here in Singapore at Pek Sin Choon’s old shophouse at Mosque Street.

Things started to get better after the war and they started packing better quality teas. Every time you eat Bak Kut Teh and open up a packet of tea, notice that the packs are wrapped in two layers of paper. (The aforementioned (白毛猴) was packed in a single layer). The slip of pink paper in the inner layer is a relic of the post war years because white paper was not easy to get hold of right after the war, but there was plenty of pink medicinal paper around!

This tradition of hand wrapping their teas in double slips of paper is still being done at Pek Sin Choon’s shophouse along Mosque Street. If you happen to drop by one day, you might just be able to catch Madam Lim in action! Now 76, she started packing tea when she married into the family at the age of 20. Now, that is a good 56 years of packing tea! 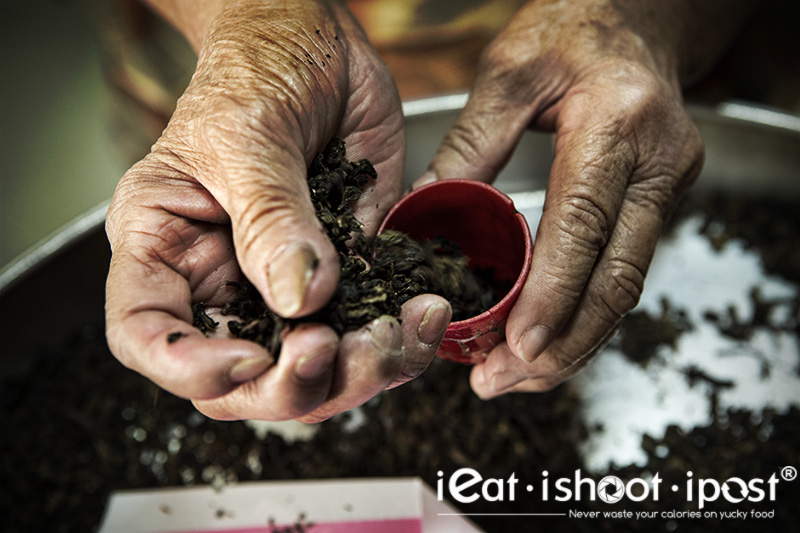 According to Kenry, this tradition is not cheap to upkeep. They are still using the same printing slides that have been around since before the war so the material cost is not the problem. But labour cost is proving to be quite expensive when compared to the newer machine packers. They are still trying to keep this traditional packaging for as long as possible but it is he can’t see these packaging lasting another 20 years.

Now let’s get down to the Teas, shall we?

The reason I am writing this post is to tell you a little bit about these very iconic Teas which you have probably come across before when you eat Bak Kut Teh but never spared a second thought about. Not every stall will carry all five teas but you will definitely find at least a few of them in the majority of Bak Kut Teh Stalls.

The three teas on the right, viz Xin Chun Shui Xian (新春水仙 – New Spring Water Fairy), Tie Luo Han (铁罗汉- Iron Warrior Monk), Tie Kuan Yin (铁观音- Iron Goddess of Mercy)are Oolong teas that have been around since before WWII. Tie Guan Yin is considered a generic tea which tends to be a little heavy (unrefined) and will appeal to the older folks because they are familiar with its taste. More experienced tea drinkers would opt for the other, better quality tea leaves.

Tie Luo Han is one of theSi Da Ming Cong (四大名樅),ie one of the four famous Rock Teas from the Wuyi mountain region. Pek Sin Choon’s Tie Luo Han has been blended with aged teas to give it a more mellow flavour. Both the Tie Luo Han and Tie Guan Yin are quite similar in taste. The Xin Chun Sui Xian (新春水仙) on the other hand is very different. It is a blended tea from three different years and has a smoother aged flavour. The colour is very deep and the tea contains lots of tannin which helps to cut through the fats. It is a excellent tea to pair with Bak Kut Teh which are more peppery.

If you are new to the Bak Kut Teh teas, then a good one for you to start with would be the Bu Zhi Xiang (不知香 – Unknown Fragrance). This tea was introduced in the 50’s as a premium tea for Bak Kut Teh and at the time they cost five times more than the generic teas at the time. It has been specially blended by Kenry’s grandfather to bring out the fragrance of Bak Kut Teh, hence the name Bu Zhi Xiang (不知香) which literally means “Don’t know where the fragrance came from”. This tea is a blend of Wuyi Oolong and Anxi tea and is currently the most popular Bak Kut Teh tea in Singapore, outselling the others 10 to 1. Even though it was introduced in the 50’s, it only became really popular in the 60’s. The teas is strong enough to cut through the oil leaving the palate with a bittersweet aftertaste (Teochew: Karm Karm) which is favoured by tea drinkers.

Xiang Ji Ji(香极极) was introduced in the late 70’s and was named after a princess named Xiang Ge Ge (香格格) in a very popular TV series at that time. This tea is blended to be stronger than the Bu Zhi Xiang and has more aged teas blended in for a smoother palate. Like the Xin Chun Shui Xian, it is a good Tea to pair with the stronger, more peppery Bak Kut Tehs. Incidentally, Xiang Ji Ji means “extremely, extremely fragrant” and is the most expensive of the five Bak Kut Teh teas shown here.

Just a quick note on the prices of these teas. Xiang Ji Ji is the most expensive followed by Bu Zhi Xiang and then the other three pre-war teas. Some places like price Xiang Ji Ji at $6 a packet, Bu Zhi Xiang at $5 and the rest at $3 per pack. However, there are other places like Rong Cheng that just charge a flat rate of $4 per pot irrespective of the tea you choose. So that’s a little tip for you if you are always looking for lobangs (great deals).

For those who might need a little help in brewing the tea, do check out the video above where Kenry demonstrates for us the Kung Fu Tea ceremony. If you are still not confident, don’t worry, the next time you go to the Bak Kut Teh place, just ask them if they can help you with it. I know many places which would be happy to help you brew the tea. Now that I have learnt the art of the Kung Fu Tea ceremony, I make it a point to do it in front of my kids and get them all to drink some tea with the Bak Kut Teh. It serves as a good history lesson as well as a time of family togetherness!

I hope by now you have been persuaded to order some Tea with your Bak Kut Teh the next time you visit the Bak Kut Teh restaurant. Not only does pairing the tea with Bak Kut Teh make it more pleasurable, those little packets are filled with history that stretch back to the pre-war years! Cherish them while they are still around because you might not see them in 20 years time! 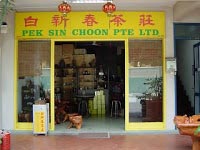 Heritage Hawkers
Rong Cheng Bak Kut Teh: Every day is a Good Day for Bak Kut Teh!
Next