Lao Liang Pork Trotter Jelly: They don’t do it like this anymore! 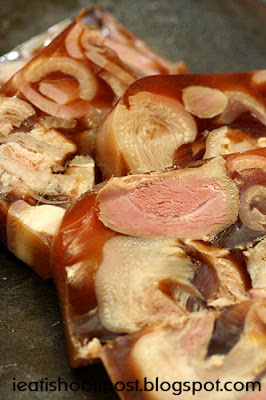 Now this is a dish you don’t often get to see nowadays. (Actually I don’t think it was ever that common). I admit that this was the first time that I was introduced to this Teochew Dish myself. It is yet another nail in the coffin of my self delusional status as a true blue Teochew Ah Hia.

It is rather interesting, but this Pork Trotter Jelly (or Pork Aspic as some call it) reminds me of some of the stuff that you can get from the Cold Meats section of your Butchery. The reason that this dish is not often seen is, I presume, the amount of time and effort it takes to make the dish. Pork Trotters are stewed for at least 8 hours to turn the collagen into gelatin. The meat is then left overnight to set and then left in the fridge for another whole day. So all in all, it takes at least 2 days to prepare the dish. Of course, if you want to take some short cuts, you could add cornstarch or gelatin as some purportedly do. But this third generation Teochew couple still insists on doing it the traditional way without the additives. 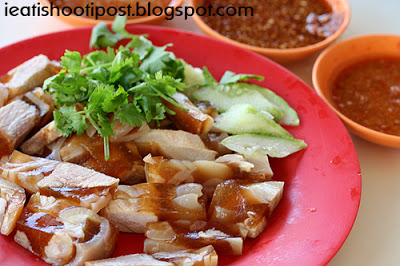 If you like to eat the jelly of white chicken, then you are going to love this dish. It goes with a very special chilli sauce which they make with Blue Ginger (Lengkuas). The texture is excellent and the jelly is so clear you can see through it easily (I am told that is one of the ways to tell if it was made right). Tastewise, however, I thought that it could have had a bit more oomph. 4.25/5 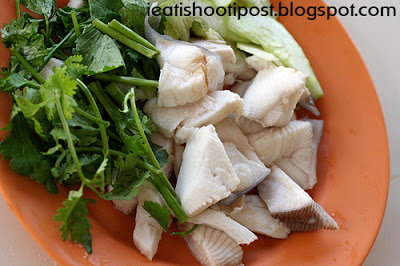 The thing about Teochew food is the simplicity of the dishes which places the emphasis on the freshness of the ingredients. The shark’s meat is simply boiled in water to cook it and served with a plum/peanut sauce. You simply cannot get away with using second rate fish. I am sure there will be people who would rave about this dish, but it failed to wake up the “tiger” in this half past six Teochew Ah Hia. 4/5 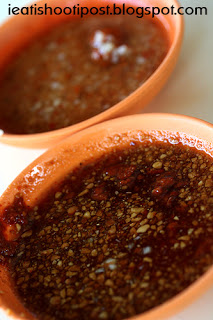 If you think that you can simply prepare this dish at home, then you are seriously mistaken. Well, you could maybe get hold of some fresh shark meat, but you would be hard pressed trying to get hold of some plum sauce that is as good as this one. This plum sauce is so good that you have to pay an extra 20 cents for each additional plate. But there is good reason for it. This couple actually make the plum sauce themselves from preserved plums. But that’s not all. The plums have to be aged at least 2 to 3 years before being turned into plum sauce. That means that they have a continual 3 year stock of preserved plums at their home! Now, if you ask me, I’d rather just pay 20 cents more to get my plum sauce fix!

Traditional Teochew food that is quickly disappearing from our hawker food scene. For this particular stall, this will be the end of the line after three generations when the couple retires. So better go try some before it goes the way of the Dodo.

Thanks for the post! Suddenly had a big craving for zhu jiao dong and now I know where to find it! THE MUST TRY LIST
Coffee Hut: Kopi So Good, He had 4 cups!
Next