Hokkaido Sushi: The Sake lovin’ Chef is Back! 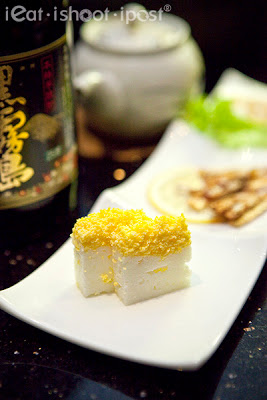 My Japanese friend Yukari has some relatives living in Sendai. Thankfully they have survived the Tsunami although a large part of Sendai had been destroyed. She told me that the Japanese people are grateful for the support that the international community is rendering to Japan and while they are trying to rebuild the country, they want us to continue to support their economy by continuing to buy their seafood and produce. Her husband, Shinji who imports seafood from Tsukiji tells me that some of his suppliers have indeed lost contact with some of the fishermen. However, the people at Tsukiji are trying their best to continue to supply seafood. They are refusing to give up at a time like this and they need our support.

I am sure that we all are concerned about radiation contamination of the seafood and produce. Shinji tells me that each shipment of fish that he imports now has to undergo special inspection for radiation contamination. Apart from that, Chef Thomas also told me that he is also importing seafood from other parts of Japan that are not affected by radiation. So with all the safeguards in place, I am quite confident that the food at the Japanese restaurants are safe.

Back in 2009, Hokkaido Sushi was voted Best Japanese Restaurant when they were barely opened for six months. I have been wanting to pay them a visit, but never got round to it. So when I finally decided to visit recently, I was amazed to find that the reviews on the restaurant has been rather lack lustre over the last year or so. You might have felt the same way if you had visited the restaurant. So what happened?

I met up with Chef Thomas, who was helming the restaurant when it first opened in 2009. He told me that right after the restaurant won the award, he left to run another of his restaurants in Vietnam. During his absence,Hokkaido Sushi began tofalter and soafter twoyears, he has returned totake over management of Hokkaido Sushi recently. 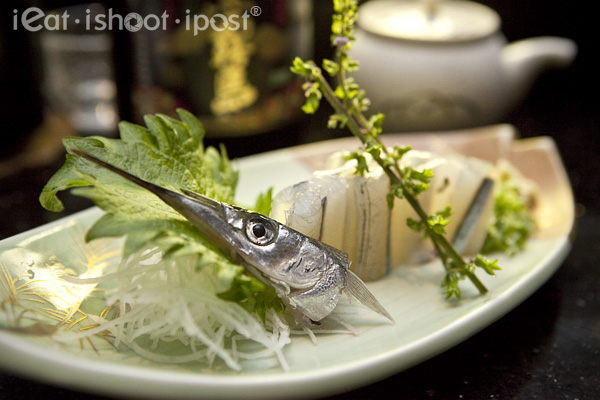 Nowadays I divide Sushi restaurants into two different types. The ones which I go eat with my kids for fun and those which I leave the kids at home so that I can have a serious Sushi experience. Whenever I go out for family Sushi, I find myself eating stuff like inari (bean curd skin) and soft shell crab rolls. The kids enjoy the conveyor belt experience but I seldom touch the raw fish. It was the sushi belt that kept me away from sushi for so long. I only got to like raw fish after I ate Sushi at a Sushi bar. In all honesty, I still think a nice fishhead steamboat or steamed pomfret has got more “shiok” in it then eating raw fish. However, what I do enjoy about Sushi is learning to appreciate the nuances and textural differences between different seafood species. As opposed to wolfing down a whole plate of fish, when you have to focus your entire attention on one mouthful of fish, it really does sharpen your taste buds.

The Sushi Omakase course here starts with a salad, followed by three types of appetizers. We were given some dried leatherjacket, dried fugu and this very interesting egg omelette where they white is first separated from the yolk, done tamago yaki (rolled omelette) style and then the yolks were steamed and crumbled on top. Tastes like hard boiled egg except that the white is sweet, fluffy and tender. It’s amazing new take on the humble egg. 4.25/5

After the appetizer comes the sashimi course and we were presented with Sayori or halfbeak which is a fish that comes into season at springtime. This little fish looks like something I would catch in order to put on a hook to catch bigger fish. But after tasting it, I think I might keep it for myself next time. Eaten with freshly grated young ginger and shallots, it tasted almost like chicken rice….. seriously. It’s amazing how the ginger brought out the savoury tones of the fish which would be missing if you omit the ginger. Definitely something I would order again. 4.5/5 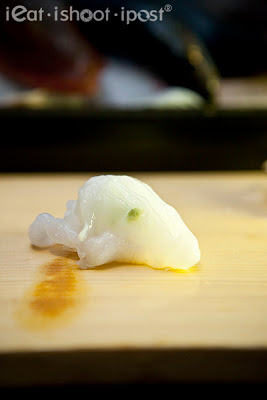 After the sashimi course, we were presented with 15 different types of Sushi. We had the usual suspects of Kanpachi (Greater Amberjack), Shima aji (striped jack), maguro (tuna) and Uni (sea urchin)etc. They were all very fresh and I plan to write a separate series of blog posts on them. For now I shall just highlight a few of the more interesting ones we had that night.

Part of the fun of sitting at the Sushi Bar is the interaction between you and the Itamae (Sushi Chef). In fact, most Sushi aficionados probably have favourite places they go to, not just because the sushi is good, but more because they are familiar with the Itamae. This is of course a bit of a problem if you don’t speak the same language as the Itamae. At Hokkaido Sushi, you won’t have the same problem since both Chef Thomas and Patrick can speak Hokkien to you if you like. So eating at the bar is quite relaxing as you can banter with the chefs and Chef Thomas in particular, especiallyadapt at livening things up.

One of the things he did was to slam this piece of Tako (Octopus) onto his chopping board to show us that it was still “alive”. He told us that when you cut off the tentacles of the Octopus, they will actually still be squirming around for a pretty long time. He served the Tako atop the rice with some lemon juice on top. I have never had fresh octopus before and it was amazing how sweet it was! Normally Tako has to be served cooked because of the risk of parasites. But Chef Thomas told me that you can eat it raw if you remove the suckers.(I am still ok asat the time of this writing) 4.25/5 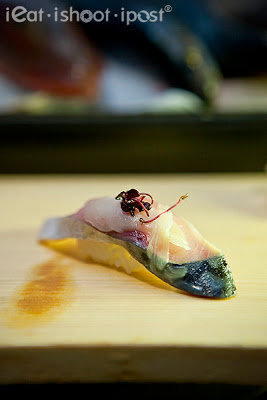 I have always found cooked Saba (Japanese Mackeral) a bit too fishy for my liking, so when Chef Thomas told me that he was giving me Nama (fresh) Saba, I was a little apprehensive. But as it turned out, fresh Saba was actually pleasantly sweet and not as fishy as the cooked version. This tane (topping) is always served with a sliver of the bluish skin with wavy black lines so that it is easily identified. It must be noted that Saba spoils quickly and must be eaten super fresh or it might result in scombroid poisoning. Not bad, but I will have to eat this a couple more times before I can rate it. 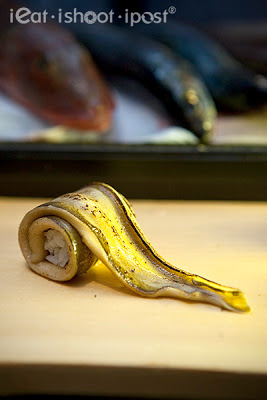 Anago (Conger Eel) is one of the first sushi that I actually liked. Being a cooked dish, it is one of the best Sushi to try if you are new to it. But you should never ask for Anago first because it is a fish that has been braised in shoyu, so if you have it at the beginning of your sushi course, it will dull your tastebuds to the the rest of the raw items. It is usually given towards the end of the course. The key to anago is the texture. One that is done well should be tender and creamy. Chef Thomas has been known to be rather generous with his anago. The photo shown here is exceptionally generous because we were quite full already so instead of two portions of rice, he reduced it to one with the same amount of topping. The taste is excellent and the flesh is tender and creamy. Definitely an item you should ask for. 4.25/5 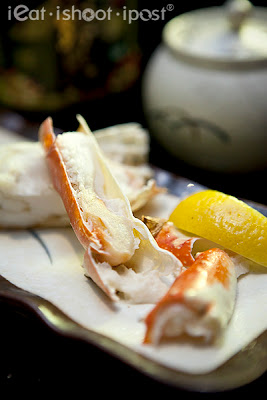 Most King Crab is steamed first and served cold. Chef Thomas perfers to grill it instead and so even though the flesh has contracted somewhat, the slight smokey aroma together with the sweet warm flesh really brought out the best in the King Crab. So simple, yet so good. 4.5/5 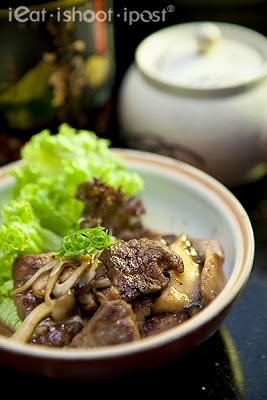 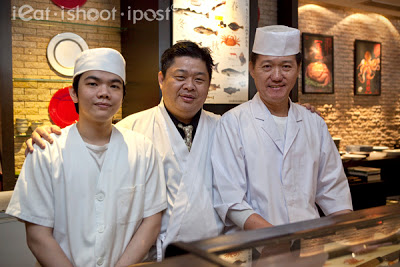 Part of the fun of eating at the bar is to be able to interact with the itamae and I think that you will find it very comfortable sitting at the bar here. They serveexcellent sushi at quite an affordable price compared to other Sushi bars. If you have been enjoying Sushi at the conveyor belt and feel that its time tomove up to the Sushi Bar, thenHokkaido Sushi is a great place to start and Chef Thomas has come up with some very special sets for our readers.

2. Special ieat Sushi Omakase Set $70++. Course will consist of a selection of starters, 5 types of Sashimi, 12-15 pieces of Sushi (includes Otoro and Uni), a hot dish (eg teriyaki beef) and dessert. (Normal cost $120++) Available for lunch and dinner. Simply ask for the ieat Sushi Omakase Set when making reservations. This offer will run for the rest of the year. Just order the “ieat” Sushi Omakase Set. 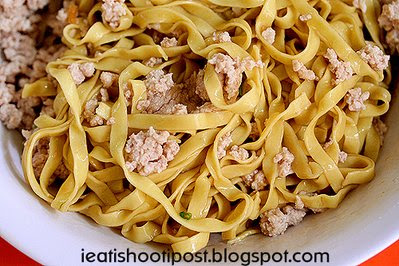 Bak Chor Mee
The ieatishootipost Polls: The Best Bak Chor Mee in Singapore is…..
Next

Featured in the Media
ieat on Vasantham Express!