I had a wonderful time talking to two lovely people today. They have just arrived from Montreal it is their first time in Asia. The guy on the left is Aymeric Pasquier who happens to be the son of the founder of Diner en Blanc and the lady is Sandy Safi. Both of them co-founded Diner en Blanc International and they have come to Singapore to take part in the event tomorrow.

Now, just in case you don’t know what I am talking about, you can read about the Diner en Blanc controversy here and the video report by WSJ is posted below.

On the day I wrote my post about Diner en Blanc, I received an email of apology from Clemens Chiang, the local organizer. In it, he expressed deep regret for the mistakes they have made which resulted in the whole mess. That was last Saturday. On Monday, as I reflected on the whole situation, I decided that instead of reading all the stories and allegations online, that I would try to talk to Clemens to find out exactly what happened. I also contacted Daniel, the blogger who was embroiled in this whole controversy to try to tease out the details.

A teleconference was set up yesterday where I spoke to Aymeric and Sandy who had just flown in from Canada. They had expressed regret for what had happened and told me that they had only found out about the mess after it occurred. We spoke for half an hour and I figured out the essentially what had happened was that the local organizers had acted on their behalf and misinterpreted some of their requirements.

Yesterday I continued to read about the whole fiasco and there were, understandably, still a lot of ill feelings out there. The whole thing was even reported in a video clip by Wall Street Journal. Many people felt that the event was pompous and “atas” and disrespectful of our Singapore culture and there were people calling to boycott the event and organizing alternate events on the same day.

Now, the truth of the matter is that I too felt angry when I initially heard about this. Who wouldn’t? They came here and told us that Chicken Rice and Tau Huay were not classy enough to be included in their chi chi gathering and then dis-invite people at a whim. No one would blame you if you wanted to “Pui Chao Nua” (spit) at them. (OK, I admit, I did do some puiing — without the saliva, of course). But once I calmed down and start looking at the situation rationally, I felt that it really is unfair to accuse someone of something when you don’t even know who that someone is and what he/she has actually done. Right?

So today, I invited Aymeric and Sandy for a meal of Chicken Rice and Tau Huay so that I find out who the people behind Diner en Blanc really are and introduce them to Singapore food properly.

We met at Tian Tian Chicken Rice in Bedok and I asked Angela, the lady bringing them around to buy some Tau Huay along the way. We ended up having a great time talking about Singapore food and also about the things that have been happening the last few days. It was their first time tasting Chicken Rice and they both loved it and cleaned their plates. I found them to be really down to earth people who genuinely wanted to organize an event that would bring people together over a meal and do it in a way which was special and memorable.

The whole Diner en Blanc thing started 24 years ago with Aymeric’s father wanting to meet some old friends for a meal. It grew to become one of the most iconic mass mobilization exercise in the world. The reason they wear white is so that they can identify each other and being a special occasion, they specify that the food has to be prepared with time and attention. There is no regulation stating whether the food has to be of a certain cuisine. In fact, local food is expected and welcomed, as long as it has been thoughtfully prepared. The last thing they wanted was someone to bring a McDonald’s Happy Meal to the event.

So here is where the miscommunication lies. It essentially boiled down to the local organizers’ misinterpretation of what is allowed to be brought to the picnic. When Daniel suggested that he bring Chicken Rice, Tau Huay and a few other “white” foods, two errors were made, not one. First, they wanted to encourage participants to spend time and effort to cook something to bring to the event instead of buying stuff and bringing it along. This was what had happened in the other countries that hosted the event, and I was told that some people even spent a week or more preparing that really special meal. The other error is something none of the press had mentioned so far. There is actually no regulation stating that the food has to be white in colour. However, in his blog post, Daniel had suggested that the food needs to be white! (He had meant it as a joke – he said it at the end of the post) But in haste, the organizers told Daniel to remove the blog post so that it would not send the wrong message to other people coming to the event. (I mean really, white food? What, no beef, no foie gras, no tomatoes, no greens? Even a baguette is brown!) You noticed that I said “error” instead of “mistake” because I think it was really a matter of miscommunication between the two parties.

So with that, I am satisfied that there is no “European imperialism rearing its ugly head again”, as someone mentioned on the social network. I am glad to have met Aymeric and Sandy and I am happy that they enjoyed eating Chilli Crabs yesterday and are keen to explore more of Singapore’s hawker foods. They have invited me to the event tomorrow which I have to turn down again (2nd time) because I do have to run the clinic in the evenings and I really don’t have a pair of white pants as the last time I wore white pants was during my JC days.

But if I were not working, I would have been happy to attend the event. I would bring Tau Huay which I would specially make myself the traditional way using organic Canadian soy beans and gypsum powder as well as Chicken Rice made with the best Koshihikari rice that I can get my hands on, cooked in a stock made from old mother hens for extra flavour and serve it with Kwong Woh Hing’s one and a half year old, naturally fermented dark soy sauce. My new friends tell me that that would make for an excellent meal at Dinner en Blanc.

This post was done entirely on my own initiative because I strongly believe that we Singaporeans are a gracious, cosmopolitan society who are confident in our own identity and magnanimous in our acceptance of others. Their PR agency had nothing to do with any of this. 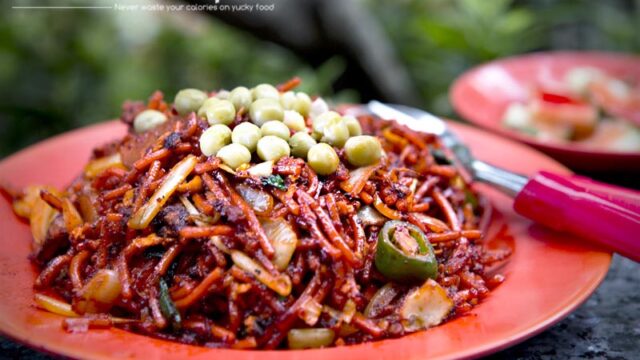 Best of the Best
N M Abdul Rahim: Why is Mee Goreng so Red?
Next