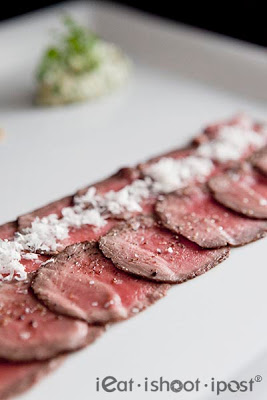 Do you like raw beef? I don’t. At first I thought it is because I don’t know how to appreciate raw beef or that I haven’t eaten a good one. But after trying Carpaccio of different kinds, Beef Tartare and even raw Wagyu beef, I think I can now say categorically that raw beef is just not my thing. 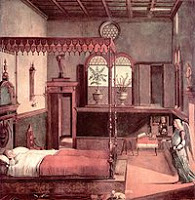 So when Chef Jusman So presented his Beef Carpaccio, I was quite hesitant at first. But his version wasn’t the familiar Carpaccio that I was expecting. It was a Roast Beef Carpaccio where there was raw meat in the middle but cooked on the outside so that it had that charred beefy aroma which, to me, is what eating beef is all about. Eaten by simply dipping it in mustard and a fresh sprinkling of parmesan cheese, I must say that this is the best Carpaccio I have come across. 4.25/5

But is it Carpaccio at all? I reckon this should just be called thinly sliced Roast Beef. The Carpaccio that I am familiar with is made of raw meat. The dish was invented in the 1950’s in Harry’s Bar in Italy in response to a patron’s request to eat raw meat and was named after the famed Italian renaissance artist, Vittore Carpaccio, whose hallmark was a reddish hue in all his paintings. So Carpaccio should technically be about thinly sliced raw meat. I mean, if you sear the outside of a Beef Tartare, it would be called a Hamburger wouldn’t it?. But I am not complaining. Whatever the dish was called, it was excellent and brought out the beefiness of the Australian beef rump that was used. 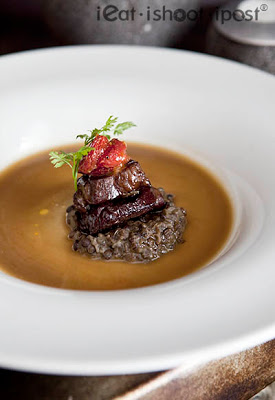 The Lamb shoulder was the dish of the day for me. This is what I remember Chef Jusman for; dishes that really have that oompph and make you complain that there is just not enough of it. The lamb shoulder was first braised till meltingly tender and juicy, then roasted in a hot oven to develop flavour and a nice crust. The Lentil Cassoulet (ie bean stew) was excellent. Bit of an indian twist on dhal chaat with French flair, it really made the dish a winner for me. It is so good that I have included Chef Jusman’s recipe for this at the end of the post so that you can try it at home. 4.5/5 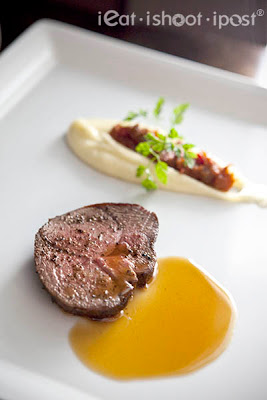 This being a media tasting event organized by Meat and Livestock Australia, I guess you have to have a roast leg of lamb which is a classic Aussie Sunday Roast which was what I used to have when I was living in Australia. There is nothing more simple and tasty than a good roast leg of lamb. Of course the key is to buy a good quality leg lamb. Once you have that, the rest is very simple. Just stab the leg of lamb with the tip of a knife and stuff whole cloves of garlic into it. Rub the rest of the leg of lamb with salt and pepper and roast in the oven for 1.5 to 2 hours and Voila!, you got a simple dish that can impress the most fastidious of foodies. Even my mother in law who doesn’t eat lamb, still talks about the leg of lamb I made for her once.

The beauty of eating a leg of lamb is the fact that when you carve the lamb you get to choose which bits you like. The best bits for me is the bit near the end, ie the shank and all the rest of the loose bits and pieces which are mixed with the charred bits of lamb fat. This is why I did not think much of having a slice of roast leg of lamb on a plate. I guess, given the limitation imposed by the MLA for the media tasting, Chef Jusman somehow had to use leg of lamb this way. Deboning the leg of lamb before roasting might be a good idea for the presentation but bad for preserving its flavour and natural juices. Worst of all I did not get to gnaw at the bone! 3.5/5

Sage has always been one of the restaurants that I would recommend anyone who is looking for a nice place to dine in. Chef Jusman, who also owns the place, has been doing a great job at his restaurant and I have only heard compliments about the food there.

Disclosure: This was a media tasting event hosted by Meat and Livestock Australia

A Word on Beef

Of late I have been challenged to think a little more about the food we eat. It is a global movement and I guess I am swept up in it after watching the documentaries like Food Inc and reading books like The Omnivore’s Dilemma by Michael Pollan. If you have not read the book or seen the movie, may I encourage you to. It is good for your own health and well being.

Essentially we have all been taught by US beef exporters to think that corn fed beef is superior to grassfed beef. However, what we were not told is that corn fed beef only came to being because of the over supply of corn that has been stored in silos in the US. The excess corn is fed to the cattle to fatten them up for the slaughter. Indeed the meat is more marbled and juicy but the cows themselves are raised in crowded feedlots standing in knee high manure.

Cows are made to eat grass. They should be casually walking around in green pastures grazing on grass. They are called ruminants and have four compartments in their stomach to process grass. When cows are subjected to a corn diet, all sorts of diseases can break out and so what they do is to inject them with antibiotics. When cows eat corn, the ratio of Omega 9 to Omega 3 fatty acids in the meat increases, which leads to a deficiency in Omega 3 in the American diet. That is why there is all this talk about taking enough Omega 3. In fact, the whole crux of the problem lies in excess corn, which is used to make everything high fructose corn syrup, corn flour, fillers and a host of other ingredients that end up in a majority of processed food products you find on your supermarket shelves.

Cows that eat mainly grass on the other hand produce meat that that is higher in Omega 3. So technically they are better than corn fed cattle. However, one has to remember that there are three different classes of Omega 3 fatty acids of which EPA and DHA have been shown to be responsible for all the health benefits. ALA, which is the other major Omega 3 fatty acid has to be converted to DHA in order to have beneficial effects. Unfortunately, when they tell you that beef is high in Omega 3, it is not mainly EPA or DHA, but ALA. However, they have done studies which concluded that there is sufficient amount of EPA and DHA in pasture fed beef to classify them as Omega 3 foods.

The bottomline for me is this. Beef is an excellent source of iron, protein and Vit B complex and lean beef that is pasture fed is much healthier than corn fed beef. So as a source of protein that you eat at home on a regular basis, try to go for lean grassfed beef and reserve the well marbled cornfed variety for that special occasion. But if you want Omega 3, seafood like Salmon is still the way to go as they contain 35 times more Omega 3 than beef and most of it is EPA and DHA. Why? Because DHA and EPA are made by microalgae that live in seawater while plants and grains make ALA.

I was told by the Meat and Livestock Australia representative that Australia exports 60% of their beef and the cattle spends most of its time grazing on grass. The cattle are sometimes finished on grains for the last 100 days to fatten them up for the slaughter, but they assure me that they don’t use much corn in their feeds.

The taste profile of lean grass fed beef is different from corn fed beef. It is gamier and beefier in taste and if cooked well, should not be tough. If I were going for steak, I think I would still choose a beef that is finished on grain because of the marbling and texture. However, for stews, stir fries, rendang and minced meat sauces, you don’t really need well marbled meats. So for these recipes, I would go for lean beef.

I have included two very useful charts on beef and lamb cuts from Meat and Livestock Australia for your reference as well as the recipe for the excellent braised lamb shoulder by Chef Jusman. It is useful to be familiar with cuts like shank, chuck, skirt which too tough for steaks but when slow cooked, make very flavourful dishes.

References:
1. Washington Post: Grassfed Beef Called Healthier Mar 15, 2006
2. CNN: If we are what we eat, Americans are Corn and Soy 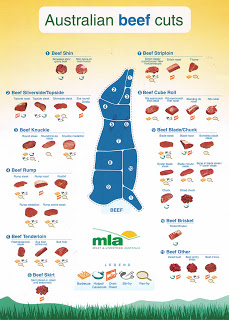 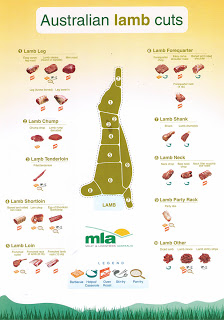 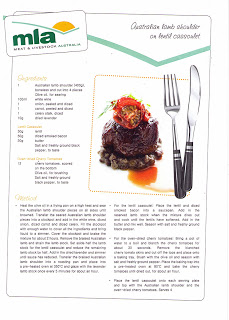 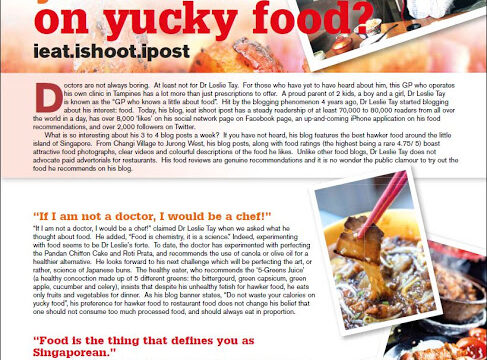 Featured in the Media
Feature in Medical Grapevine: Sep 2010
Next 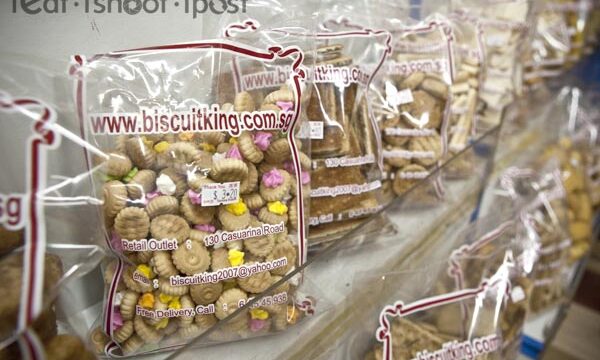 Heritage Hawkers
Biscuitking: I feel like a kid again!