Roland Restaurant: History of Chilli Crabs, this is as Singaporean as it gets! 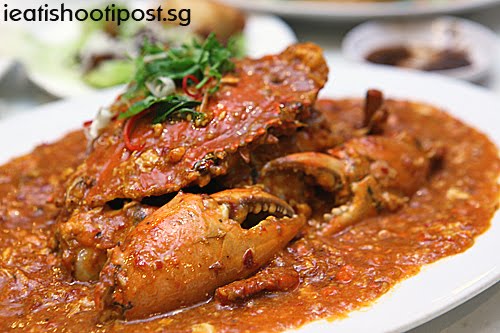 Roland Restaurant: History of Chilli Crabs, this is as Singaporean as it gets! – ieatishootipost

Today, we will add a few more paragraphs to the history of Chilli Crabs so that future generations of Singaporeans can appreciate our very own food culture.

Those of us who were around in the 70’s might remember the days when Changi was the end of the world and that a trip to Changi Beach was as much an adventure as a trip to Bintan is nowadays. To get to Changi, you would have to pass by Bedok and Upper East Coast Road which at the time was still next to the sea.

It is here in the Kampungs, among the Attap houses that the story of Chilli Crabs began.

I met with the lovely Madam Cher Yam Tian recently following the controversial claims made by the Malaysian Tourism Minister. I wanted to meet the lady who invented the Chilli Crabs way back in the 1950’s. At the time, she and her husband were living in an Attap House along Upper East Coast Road. Those were the days before there was the ECP and so East Coast Road was really East “COAST” road. Her husband, Mr Lim, who used to be a policeman (yes he wore shorts then), would catch crabs from the beach and bring them home for dinner. Being Teochew, they would simply steam their crabs and eat them plain. But one day Constable Lim asked his wife if she could do something a little different. That was when she stir fried the crabs in tomato sauce. Mr Lim thought the taste was good except that it was a little too sweet and suggested she add some chilli into the sauce as well. This was to be the beginning a Singaporean institution. She started serving her chilli crabs to her friends and family and soon everyone was telling her that she should start selling her Chilli Crabs. So in 1950, she started selling her Chilli Crabs from a pushcart along the road. 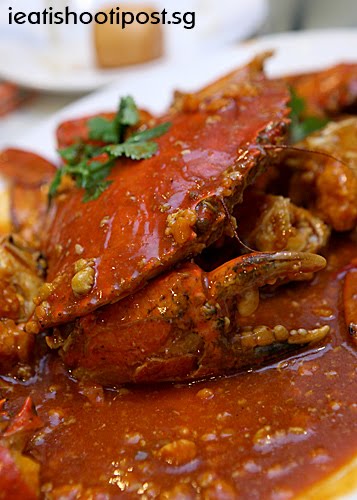 The original Chilli Crabs were sweeter and not as rich

At the time, Mdm Cher’s version of the Chilli Crabs is not quite the same one that we are all familiar with. It did not have eggs and the sambal in the recipe. That idea came a little later when the owner of Dragon Phoenix restaurant took on the idea and made some modifications to the recipe. Incidentally, Dragon Phoenix at the time was one of the “Four Heavenly Kings” of Cantonese Cuisine along with Sin Leong, Red Star and Lai Wah restaurants.

The original Chilli Crab is a tad sweeter and less rich than the current version, but it was this version that made Mdm Cher’s recipe so popular that they decided to start selling the dish along Upper East Coast Road. By 1956, they had progressed from a pushcart to a little shack that was lit by hurricane lamps. Because of the Coconut Palms along the Beach, Mr Lim called his little “shackestaurant” Palm Beach Seafood. By 1963, they expanded to the simple zinc roofed building seen in the slideshow. This is around the time that Chilli Crab was quickly becoming our National Dish. Although they installed flourescent lighting in the new premises, Mr Lim would still hang a hurricane lamp at the gate since it had become the restaurant’s icon. Anyone here remember the hurricane lamp?

The restaurant was known for five dishes which everyone ordered when they went to eat there. These were the chilli crab, tau you prawns, crispy baby squid, cockles with chilli and the seafood hor fun. In case you were wondering, Mdm Cher was also the creator of the familiar Deep Fried Baby Squid and also the You Char Kway stuffed with sotong paste which was created together with their chef.

Palm Beach was sold off in the 80’s when the family decided to migrate to New Zealand where they lived for 15 years before returning to Singapore. When they came back, Roland started working at Palm Beach Restaurant before joining his Godfather at Sin Leong Restaurant which at the time had shifted from Serangoon Road to the top of the Marine Parade Central Multistorey Carpark. When Mr Sin Leong decided to call it a day, he handed the restaurant over to Roland who, with the blessing of his Godfather, subsequently renamed it Roland Restaurant. 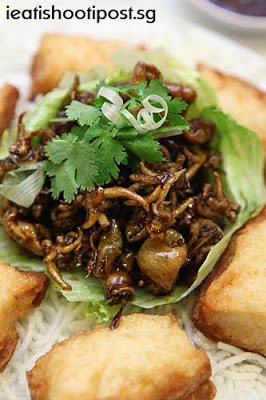 Eating at Roland restaurant can really be a blast from the past as they still serve the same five dishes which they have been dishing out along Upper East Coast Road. So, if you still remember eating Mdm Cher’s original Chilli Crab recipe as a kid, you might like to visit the restaurant to relive some of those childhood memories. One taste of the original chilli crab and you might find yourself transported back in time ala Aton Ego in Ratatouille.

This is the first time I am tasting Mdm Cher’s original recipe, not having had the privilege of visiting her restaurant as a kid. It is sweeter than the version that we all know and not as rich because no egg is added to the sauce. With this lighter sauce so you can actually appreciate the sweetness of the crab better than the modern chilli crabs. 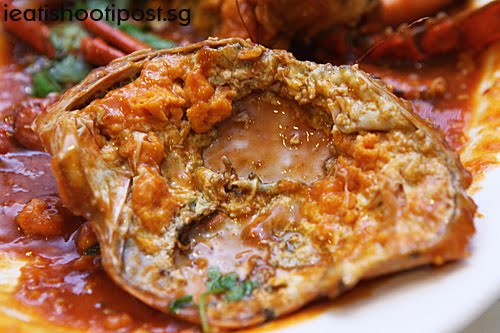 One of the things that impressed me about the crabs at Roland is that they are all full of roe. (Maybe he should spell his restaurant “Roe-land”) This is the most prized part of the crab among us Teochews. My father used to tell me that crabs with roe should be eaten plain steamed because when you fry it in a sauce you will not be able to enjoy the roe. I think that is quite true if you really want to appreciate the original taste of the roe. However, having the roe in the sauce does add an extra “Ooommph” to it and is especially shiok when you dip the fried Man Tou in it. 4.5/5

This dish is well worth a try, if not just for the sake of being able to experience a piece of our culinary heritage. 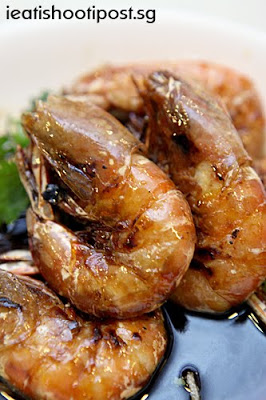 Mdm Cher’s other dishes are very good as well. The Tau You Prawns (Soy Sauce Prawns) is made from a secret recipe which is known only to Madam Cher and her two sons, Roland and Richard. Both brothers would still stay back at the restaurant after closing time to prepare the sauces for the next day. According to them, the recipe has not changed for 50 years and their old customers still keep coming back for it. Well, we are not old customers, but Rockett Girl was rather taken with the prawns and repeatedly gave her approval. The prawns at Roland are not your everyday farmed Tiger Prawns but are ones that are specially selected to contain roe. (He really should name his restaurant Roe-land) The flavour of the prawn roe with the special Tau You sauce is one of those things that would get you slurping and licking your fingers. 4.5/5

I haven’t written much about Chilli Crabs since the beginning of the blog mainly because I haven’t found one that I really enjoy. Perhaps it is a matter of preference, but I don’t like it when the Chilli Crabs are too spicy. And I have always had the niggling suspicion that at the larger restaurants, the Chilli Crab sauce have all been precooked and it was only a matter of cooking the crabs, adding the sauce and serving it. I say this because at certain restaurants, they can actually give you a bowl of Chilli Crab sauce as a side dish to eat your Man Tou with. That must mean that there is a whole vat of chilli crab sauce in the kitchen!

Anyway, I was pleasantly surprised that the Chilli Crab (the modern version) here is actually pretty good. It is not overly spicy or sweet and the sauce is chock full of the crab roe which makes for a deadly combination with the eggs. Both Rockett Girl and I felt it was the best Chilli Crab that we have had in years! 4.5/5 Roland and Mdm Cher, the creator of the Chilli Crabs

If you love Chilli Crabs, then a pilgrimage to the birth place of the Chilli Crabs is something that has to be on your list of things to do.. Honestly, I had initially thought that even though they might be the creator of the Chilli Crab, that does not necessarily mean that they will have the best Chilli Crabs around. But I was proven wrong.

If there were some sort of Cultural Medallion awarded by the Heritage Board, then I think Mdm Cher would deserve it for her contribution to our Singapore Food Culture. I mean, the lady has been responsible for quite a few of the dishes which we all recognize as being part of the Singapore Seafood Scene. We have been accused of clever marketing campaigns, so rather than denying it, why not live up to their expectations?

Mention “ieatishootipost” and get a 10% discount! 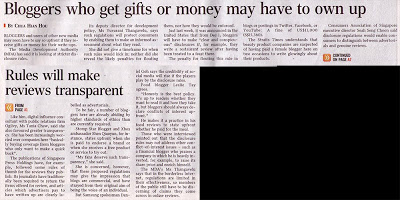 Featured in the Media
More transparency in Blogs
Next

Featured in the Media
Ieatishootipost Channel U Feature: Thanks for the support!