How to Season a Wok: The Science behind it and Step by Step instructions

Video on how I seasoned my new Wok

Why I Walked the Way of the Wok

My mum has not bought a wok for the last 30 years or so. For as long as I can remember, she has always been using the same cast iron wok since I was a kid. I, on the other hand, have been changing woks every one or two years because my teflon/ceremic woks get from non-stick to all-stick over time. So one day I decided that enough is enough. From now on, it’s One Man, One Wok.

The other reason that I got myself a traditional Wok was because I have been wanting to do some Wok experiments for the longest time. I wanted to chase the elusive Wok Hei and learned the art of capturing it. For that, I needed not just a Wok, but some serious fire power. I have ever toyed with the idea of being able to bottle liquid Wok Hei like how they bottle liquid smoke. Just imagine frying rice at home on your kitchen stove with Wok Hei aroma with just a few squirts of Liquid Wok Hei! It would be the beginning of a new epoch of Chinese home cooking! If you know of any professor of food chemistry who can help me understand the science of Wok Hei, please write to me at leslie.tay@gmail.com.

In order to start my experiment, I first needed to buy a Wok. There are many types in the market. Broadly speaking they can either be made from Carbon Steel or Cast Iron and can have either a long handle or two short handles on each side of the Wok. You can choose between a machine spun one or a hand beaten one and between having one with a round bottom or a flat bottom. So many choices, where to start? Thankfully, with the help of Grace Young’s book “The breath of a Wok”1 I managed to narrow down my choice. She recommended a 14 inch, flat bottomed, carbon steel wok for the home cook. So with that in mind, I went a Wok hunting at where else, but my favourite kitchen wonderland, Sia Huat.

I eventually bought myself a 14 inch hand hammered, Carbon Steel, round bottomed Cantonese style wok (two short handles). The reason I bought a round bottom instead of a flat bottom is because it is much easier to use a ladle or a spatula on a round bottom as the curved edge fit perfectly on a round bottom wok. Also it is easy in Singapore to buy a wok stand to place on top of your stove to support the wok. I chose a hand hammered Carbon Steel wok because each hand hammered wok is unique and the hammering makes the wok more durable. I also chose one where the carbon steel is relatively thick such that the wok is not easily deformed with just your hands. I chase Carbon Steel because it heats up and cools down very fast, unlike a Cast Iron wok which keeps its heat. I also wanted to be able to toss my Hor Fun over my stove and a Carbon Steel wok is lighter and more durable and will not shatter like a Cast Iron wok. I was thinking of getting one with the long handle as it would make it easier to toss but the problem is that they tend to be less stable. At any rate, I have seen many chefs doing the “pao” with the short handle wok and a Good Morning towel, so I went for the short handle one.

There are many theories on how to Season a Wok. People have told me all sorts of things from rubbing pork fat to frying chives and ginger in it. I wanted to do it properly and the only way was to first understand the scientific basis of it. The first thing I did was to consult my bible on cooking, namely “On Food and Cooking” by Harold Mcgee. In it, Mcgee2 said that the basis for making a cast iron pan non-stick was to create a patina by heating oils in the pan at high heat. This causes the oils to break up into fatty acid chains which then re-combine with to form a smooth, non-stick polymer surface. With that in mind, I set out on my research and found this excellent article on the Chemistry of Cast Iron Seasoning which pretty much explained what I needed to know about wok seasoning.

Based on what I understand, here are the different steps I took to season my wok.

1. First, wash the wok thoroughly in hot soapy water and steel wool to remove the industrial oil used to protect the wok from rusting.

2. Heat up the wok on high heat to blacken the new steel. What is happening here is that you are trying to create Fe3O4 aka “Black Rust” or magnetite. “Black Rust” is protective and prevents corrosion and also enables the fatty acid polymers to bind strongly to the metal. Keep rotating the wok over the fire to blacken the whole wok.

3. Once the wok is sufficiently blackened, turn off the heat and let it cool down. Don’t add oil immediately or the oil might just burst into flames. Trust me, it happens. (Just imagine me in a cartoon scene with my face all black and hair singed holding a bottle of oil in my hand) All you need is the wok to be sufficiently hot so that the pores of the metal open up to allow the oil to seep in.

4. I bought a bottle of flax seed oil specially for seasoning the wok because flax seed oil is a “drying” oil which means that when it dries, it hardens into a lacquer like substance. Flaxseed oil aka Linseed oil was used in the past as a sealant for artwork. Hey if it works for Rembrandt, it works for me! Flaxseed oil is quite expensive and is available at health food stores. In retrospect, I think it would have worked quite well with soybean oil or corn oil which, according to Mcgee2, are both highly unsaturated oils that are prone to polymerization. Once the wok has cooled down a little but still hot, wipe a thin layer over the wok using a paper towel and tongs.

5. Next we heat up the wok on medium heat to cause the oil to break up into fatty acid chains. Rotate the pan so that each part of the wok will turn into a bronze colour signifying that polymerization is taking place.

6. Give the wok a good wash and scrub with hot water and repeat the process 3 to 5 again if required. I did this as an extra step which is not really necessary but it wasn’t hard to do and I just wanted to add an extra coat.

7. Once you have burnt the oil into the pan, give it a good wash with hot water. After washing the wok, I first fried some Chinese Chives in the wok. Traditionally, this was used as the only step in seasoning the wok. I did this as a first fry because, according to Young1, the sulfer containing compounds in Chinese chives have antibacterial properties although she suspects that the amount is too small to make any difference. Practically, frying chives in oil is a cheap and easy way to spread the oil over the wok and the Cantonese way of saying gao choy sounds like ceung gao which means “long life”. I am not superstitious, so personally, it’s just a bit of acknowledgement of the Wok tradition. You can of course omit this step and go straight into cooking whatever you like.

8. Once the wok is seasoned, it is washed only with water and a natural bristle brush. Soap and scouring pads should not be used after this as it will remove the patina.

I am very happy with my new wok. It is durable and I can use my spatula to cling clang on the wok without fear that I would scrape off the non-stick coating. I have tried cooking all sorts of stuff like Hor Fun and eggs and it really is non-stick most of the time. If something does stick, you can simply turn down the heat and scrape it off with a spatula. The durability of the carbon steel means I can use the edge of my wok stand as a fulcrum to toss my food quickly over high heat without fear of damaging the bottom of the wok. This two thousand year old invention, doesn’t need to be reinvented with Teflon, it is time tested and perfect as is. No more non-stick woks for me! I am now a conservative One Wok Man.


Acknowledgements
Thanks to Silverchef for providing the original soundtrack for the video.

Hello! Just wondering, where did you get that whole portable wok burner setup?

I have a coated carbon steel wok. How do I season it?

Just fry some green onions in it and it should be ready to go!

Thanks Leslie. I will try it out

Hi, I’m looking for either cast iron wok or carbon steel wok, where can I get them. thank you.

I bought the hand hammered 33 and 45 cm made in Japan yamada iron wok. It’s only 1.2 mm so it’s light to handle. Next is to get a proper high btu jet burner. Typical home gas burner just can’t make it. Any advise on where to get your setup?

May I know if
1. the YAMADA Hammered Iron Single-Handled Wok Is non-stick?
2. Is the handle heat resistant?
Thank you.

I am not familiar with Yamada woks 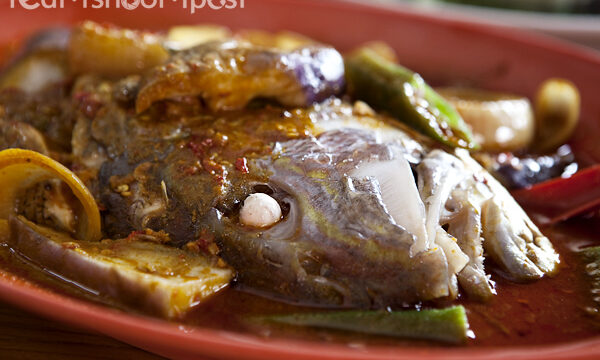 THE MUST TRY LIST
Lau Hock Guan Kee: The Origins of Fish Head Curry
Next 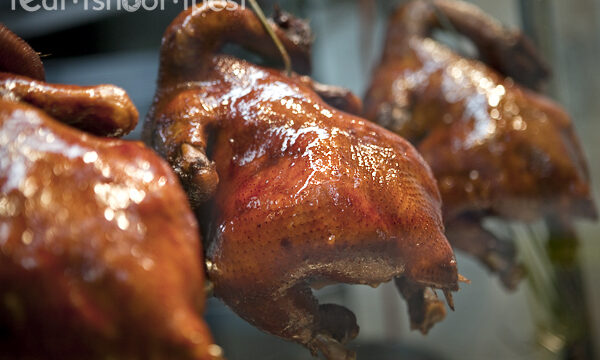