Hai Kee Char Kway Teow: The Famous one from Queenstown has moved here!

Print
Frying a plate of Char Kway Teow is a dying art in Singapore. Of all the hawker dishes, Char Kway Teow is the most artisanal because the essence of a plate of Char Kway Teow lies almost solely in the hands of the hawker. The other ingredients like Kway Teow, eggs, sweet sauce, cockles with the exception of maybe the chilli is pretty much generic. Unlike Hokkien Mee where the secret might be hidden in the prawn stock, with Char Kway Teow, everything is pretty much laid bare and there is no way to hide your poor frying skills.
The way I see it, the future of Char Kway Teow looks pretty bleak. Of the most famous Char Kway Teow’s in town, including this one, there is no next generation of hawker who is taking over the ladle of the Char Kway Teow master, except for the one at Meng Kee. I think there are many reasons for this. Firstly, there is no money to be made from Char Kway Teow. Not much anyway. It is not a dish which is easily traslated and franchised since there are no secret ingredients involved. Sure, you could set up a stall in the food court and employ a Chinaman to fry it, but unlike Chicken Rice, there is nothing you can really control from a central kitchen.
Secondly, unlike dishes like Prawn Mee and Hokkien Mee where you can increase the price by adding sexier ingredients like bigger prawns or even crabs, there isn’t really a star category of cockles which you can add to Char Kway Teow. I guess you could add big prawns like what they do in Penang, but that sort of changes the whole character of Singapore style Char Kway Teow and the traditionalists probably won’t approve of it.
Even if you could find a new generation hawker who is content with the heat and hard work of frying Char Kway Teow with limited rewards and little prospect of expansion, you still have to contend with pressure from the Health Promotion Board who admonishes us (quite rightly, I hesitate to agree) that all that pork lard and eggs is really bad for your health and we should all eat less of it. Can you see a bright future for Char Kway Teow? 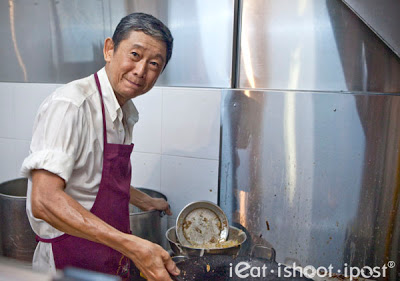 Hai Kee Char Kway Teow is one of those Char Kway Teow stalls that belong to that elite class of Char Kway Teow hawkers that you can number with one hand. There are really only very few Char Kway Teow stalls that you can spend your precious calories on nowadays and if you have that Char Kway Teow “need-to-feed”, then many fans would have headed for this famous stall in Queenstown. As you know, Margaret Drive Food Centre is going to be demolished soon, so this Uncle has moved out early and settled in his new premises at Telok Blangah Crescent Food Centre.
It’s good to see that at 62, this Char Kway Teow uncle is still going strong. He has been frying Char Kway Teow since 1967 and like many hawkers, he used fry with a charcoal fire on a pushcart, always running away from the Dae Gu (Health Inspectors). He got caught so many times that he became friends with the Dae Gu. I suspect that perhaps the Dae Gu might be a Char Kway Teow fan too! So much so that the Dae Gu would often ask him to run away with his pushcart when he comes! Since settling at Margaret Drive Food Centre, this uncle has been getting a steady stream of fans and you can easily spot his stall from the long queue that starts to form from around 5pm when he starts frying.

There is another reason for the long queue apart from the fact that he has many fans. This uncle fries each plate of Char Kway Teow individually. Most Char Kway Teow hawkers tend to fry a big batch and might fry 4 or 5 plates at one time. This man insists on frying each plate one at a time. Of course, he would pre-fry one large batch first and then leave this in a big steel bowl before dishing it out for the final fry when you order the Char Kway Teow. This is the reason why he only frys around 200 plates in the old days at Queenstown. Since moving to his new locations, business has been slowly picking up again but it is a good time to visit him since his queue is nowhere as long as it was before.

The Char Kway Teow might lack the nostalgia of the old stall but it is still very very good. He is still very generous with his cockles despite the fact that he is still selling at the same price but the rental had increased five fold. This uncle is an expert at preparing the Pork Lard. He uses only fats found at the rib portion of the pig and prepares it so that the Pork Lard disintegrates with one crunch, releasing its alluring flavour. Combined with the slippery, savoury Kway Teow, every mouthful really is well worth the calories! 4.5/5 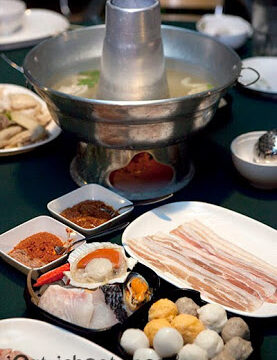