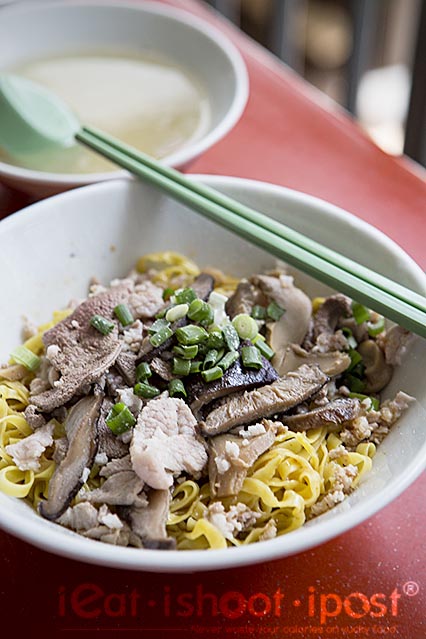 Every time I write about Bak Chor Mee, I can’t help but feel that it is one of the most uncelebrated of Singapore hawker dishes. I guess the problem is that you can find similar dishes in many other South East Asian countries and so it is hard for Bak Chor Mee to stand out from the crowd. So for many foreigners coming to our shores, this is probably not uniquely Singaporean enough to warrant their attention.

But when you speak to any of these Bak Chor Mee hawkers, they will always tell you that Bak Chor Mee is unique to Singapore. It is, of course, a dish which our migrant forefathers brought over from China. But when it got here, our Teochew forefathers gave it that distinct South East Asian twist by adding chilli to it!

I must confess that before I started blogging six years ago, I was a Bak Chor Mee Mai Hiam, Mai Ter Kwa (no chilli, no pork liver) kind of a guy. But over the years, I have learnt to appreciate the primary role of the chilli paste in my Bak Chor Mee. For most Bak Chor Mee hawkers, the chilli is the highlight of their dish and the thing that makes their dish better than the hawker down the road. So when I blog about a new Bak Chor Mee stall, I always ask the Bak Chor Mee Man if I should order with or without chilli. Invariably, I would be told that I need to eat it with chilli in order to experience the dish at its best.

My decision whether to add chilli to a dish really depends on what goes into the chilli. Unlike a lot of other people I know, I don’t find sadistic joy in having my mouth feel as if it had been seared by a hot iron, so I don’t really enjoy the heat in chilli. However, what I don’t want to miss out on is the umami that is usually packed in the chilli sauce. A lot of hawkers add dried prawns and candlenuts into their chilli paste and this gives the chilli that savoury ooompph. So by omitting the chilli, you are robbing yourself of the soul of the dish. Having said that, my personal preference is to gravitate towards those hawkers whose chilli paste is a good balance of umami and heat and this stall gets it just about right for me. 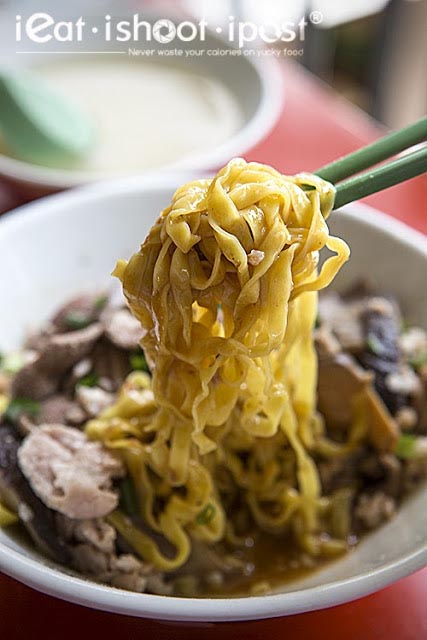 I love the smell of freshness in a hot piping bowl of Bak Chor Mee. I think it is the combination of the fresh pork, noodles, white pepper and black vinegar that gives Bak Chor Mee that subtle but alluring aroma. And when you get your first mouthful of hot, lively, bouncy noodles with just that thin film of lard, chilli paste and black vinegar, you really feel that you are home. No wonder Singaporeans can eat this dish morning, noon and night. It is the ultimate comfort food!

What makes 58 Bak Chor Mee a little different from the other stalls is that their mushrooms are not stewed. Instead they are sauteed mushrooms and they also use canned champignons which I feel are really old school. The texture of the noodles are excellent which is what you would expect at any respectable Bak Chor Mee stall. The chilli is not overly spicy and full of dried prawns, so it is one stall where I would actually ask for a bit more chilli give the umami levels a boost. 4.25/5

The stall is manned by 2nd generation hawker, Mr Ang, who is affectionately nicknamed “Gor Chap Puay” (Fifty Eight) by his customers. He took over from his father who had been selling Bak Chor Mee since 1973 at the old market in Taman Jurong. He tells me that he has been helping out at his father’s stall since he was a teenager until he finally took over about 10 years ago. Now in his forties, he is quite settled selling Bak Chor Mee after stints doing other stuff. It’s good to know that we have youngish hawkers like him who is willing to continue his father’s legacy.

This stall has quite a following and is the one stall which was most recommended by our fans for Bak Chor Mee in Taman Jurong Food Centre. The noodles are lively and the chilli has a good balance of heat and umami. It’s a fine bowl of noodly goodness which should satisfy that craving for Bak Chor Mee.

Featured in the Media
8 Days Eat! Episode 4: In Hot Soup!
Next 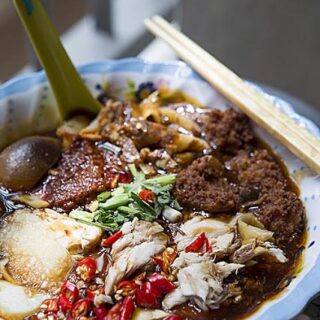