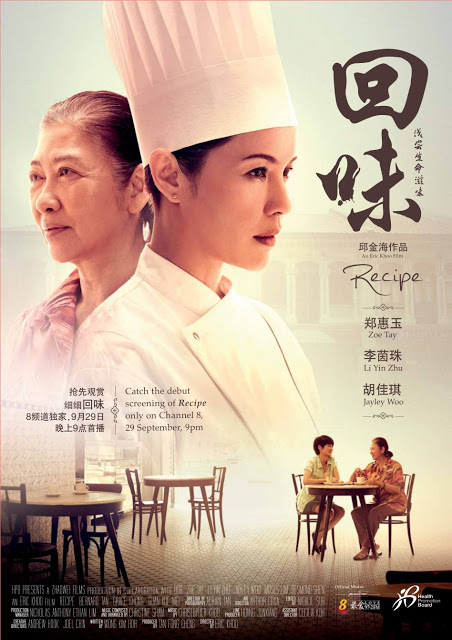 I don’t usually watch dramas but theone which really enjoyed was The Little Nonya. Apart from the engaging storyline, what I really enjoyed was watching the Zhor Zhor (the Matriach, played by Li Ying Zhu 李茵珠) describing the nuances in taste of the classic Nonya dishes. I thought is was a really entertaining way to learn about Nonya cuisine and the seriesdid a lot Nonya food culture. Since then, I have been hoping to watch a series which will do the same for our hawker food!

Now, if you feel the same way I do, then Recipe is a TV movie that you will want to watch!

This one hour drama has been spearheaded by the Health Promotion Board as a way to increase public awareness of dementia, a condition where one’s brain function gradually deteriorates. The risk of dementia increases with age, and this condition currently affects over 28 thousand patients and is projected to increase to 80 thousand by the year 2030.

The story revolves around an elderly hawker (played by Li Ying Zhu 李茵珠 – Zhor Zhor in Little Nonya) selling Hainanese Curry Rice (basedon thefamous Beo Crescent no-name Hainanese Curry Rice) who gradually grows more forgetful due to Alzheimer’s disease. Herdaughter, played by Zoe Tay (郑惠玉) is a French Chef who works at a fine dining restaurant (shot at Wild Rocket) who has aspirations to open her own French dining restaurant. Through the re-discovery of her mother’s signature dishes to help her mother recall memories of her past, she eventually comes to appreciate the old Hainanese Curry Rice recipes which have been handed down by her grandfather.

So how do you recognize dementia?

Well, here are some of the warning signs.

1. Forgetfulness that affects day-to-day function – increasing difficulty in remembering things
2. Difficulty doing everyday tasks – Things like taking a bath becomes difficult to do
3. Misplacing things
4. Difficulty communicating – forgetting the names of everyday items or word finding difficulty
5. Changes in mood or behaviour – exhibiting rapid mood swings
6. Changes in personality
7. Confusion of time and place – forgetting where they are and what day it is

This looks like yet another gem of a movie by Eric Khoo, so do remember to catch “The Recipe” when it airs on TV on 29 September 2013 on Ch 8 at 9pm!

Here is the link for more information about Recipe.

Featured in the Media
8 Days Eat! Episode 3: A Crabby Affair!
Next

Featured in the Media
8 Days Eat! Episode 4: In Hot Soup!