I began this Durian season with the frustration of having met some down right crooked Durian sellers. So I embarked on a new series of Durian exploration with renewed vigor and was very blessed to have the assistance of Durianologist, Tommy Lim who has been providing me with tips on where to find the best Durians in Singapore. I am glad to report that as I near the end of the season, my frustration has turned to joy as I had the privilege of meeting so many friendly and honest people along the way!

“In life, pray that you always meet nice people and you will have a happy life!”

So today, I want to introduce you to Mr and Mrs Chia who will no doubt contribute to your happiness in life. This couple have been running a non-descript little Durian stall in Pasir Ris ever since Pasir Ris became a new town. It is not often that you see a husband and wife Durian tag team, but it makes so much of a difference to have a lady opening Durians alongside her husband. It gives the place a more homey feeling, as if you are visiting your uncle’s house!

Anyway, this is a little stall which you will probably walk past without even noticing in between Durian seasons. The inconspicuous signboard and weathered aluminium shutter doors betray the fact that Mr Chia has been in the business since 1968 when he started his career as a “Liu Lian Ah Di”, helping to open Durians for the “Liu Lian Towkay”. He went on to be come a Liu Lian Tow Kay himself and was probably most well known during the 1980’s when he was doing a booming business along Waterloo street selling Tiger Hill Durians.

“In those days, the Tiger Hill Durian and D2 were the most popular!” He recalls with a glimmer in his eyes.

Hands up, those of you who remember Tiger Hill Durians?

Ah… you are showing your age!

Just in case you have been having too much Mao Shan Wang, Golden Phoenix and D24 and are looking for something a little more boutique, less well known and more risky to add to your Durian resume, then this is the place to find them. After all, man does not live by Mao Shan Wang alone. After you have had your fill of Mao Shan Wang, it’s time to venture into new and uncharted territories!

This is precisely why I found myself in Pasir Ris on a Saturday afternoon. My Durianologist SMSed me about a rare Ai Ching Guo (爱情果 – Love Fruit) which can be found at this little store.

“Why is it called a Love Fruit?” I wondered to myself as I drove towards Pasir Ris. “Is it a heart shaped fruit or is it love at first bite?”

Well, it turns out that the fruit was the result of two brothers competing with each other to produce the best Durians. The story goes that their plantations were visited by a young couple who carved out a cupid sign on the trunk of the Durian tree! Apparently both brothers found the sign on their trees and so they called their Durian 爱情果 ie the Love Fruit!

The Durian itself is a medium sized fruit with thick thorns and light green in colour. The flesh is dry, pastey, very smooth and not overly sweet. Not quite pungent enough for me, but maybe it’s one for the young starcrossed lovers!

Mr Chia then picked up a very interesting looking Durian and told me that it was a D13 and a half. It’s called “13 and a half” because the plantation owner found this particular cultivar growing within a D13 plantation and didn’t have a name for it.

The husk itself is very distinctive. Its extra broad green thorns end with a brownish tip which make it look very much like a tortoise shell. The flesh is thick, deep yellow, sweet and creamy and not pastey so it is quite light on the palate. If you come across a D13.5, go for it. 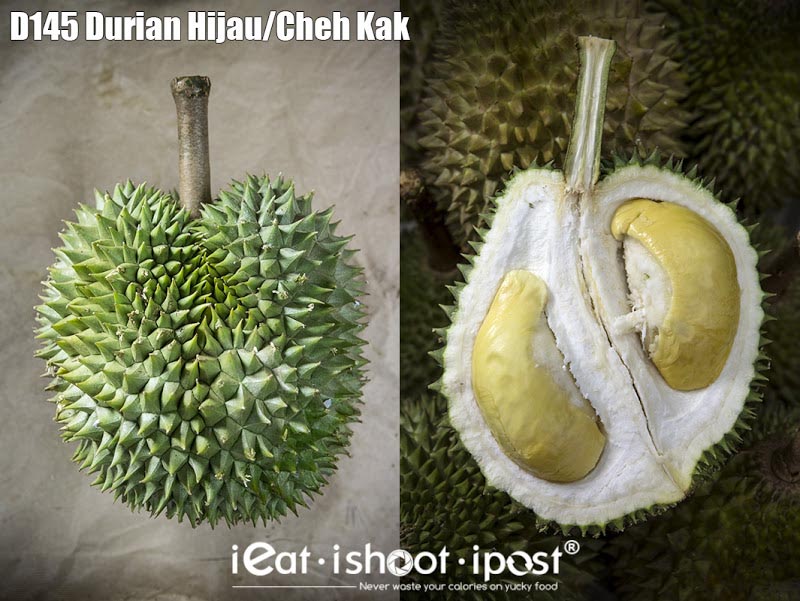 Another distinctive fruit that Mr Chia showed me was the D145 aka Cheh Kak which literally means “Green Husk”. One look at the fruit and you would know why. What I really want to know is why is wasn’t named according to its heart shaped husk which is characteristic of the cultivar? This looks more like a 爱情果 (Love Fruit), no?

The flesh is yellow, dry and pastey and predominantly sweet, but not cloying. It leaves your palate with a calm neutral finish which we Teochews like to call “Karm Karm”. Personally, it lacked character, but it should appeal to those who don’t like their Durians too pungent. You might find it hard to believe that there are people like that, but I tell you, my Japanese friend, Hisato actually prefers the hard, unripen Thai breeds. I always tell him that he really doesn’t know how to eat Durians! (As much as he tells me I don’t know how to enjoy Sushi!) 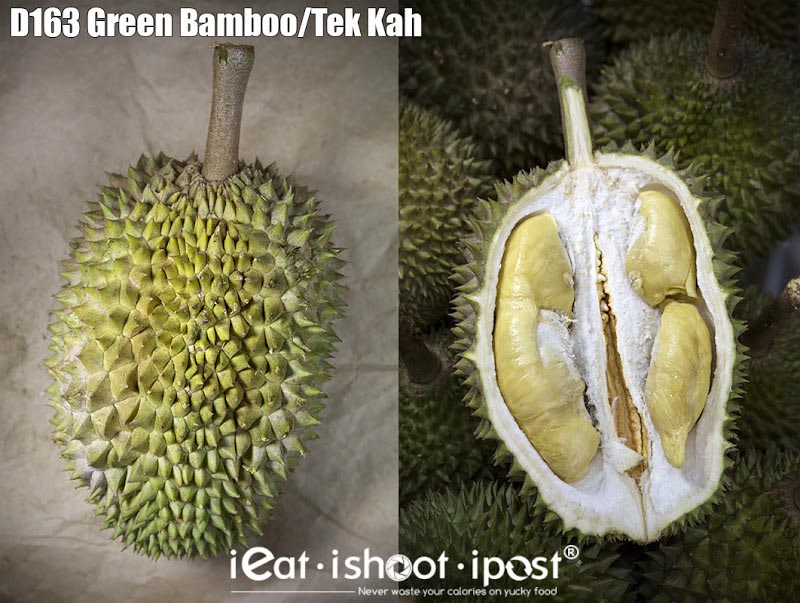 Mr Chia brought in some truly magnificent Green Bamboo the day I visited so I can’t help but post another photo of it for the archives. The Green Bamboo is easily recognized but its hollow core and elongated shape. The batch that Mr Chia brought in was very fleshy and creamy with a distinctive flavour which I really enjoy.

Mr Chia sells the Mini Mao Shan Wang at $30 per styrofoam box because he tells me that if you try to go by weight, then it really doesn’t make sense for anyone to want to buy Mini Mao Shan Wang! I was there when a regular customer came by to buy a box and I took a photo for your reference. Not bad for $30 at the end of the season prices!

Every stall has its own special Durian cultivars and this stall specializes in D13 and XO. They come from old plantations in Tangkak and are particularly good.

The D13 is typically light green in colour and the fruit is more muscular near the stem and tapers to sharper base which terminates with a distinct brownish depression. 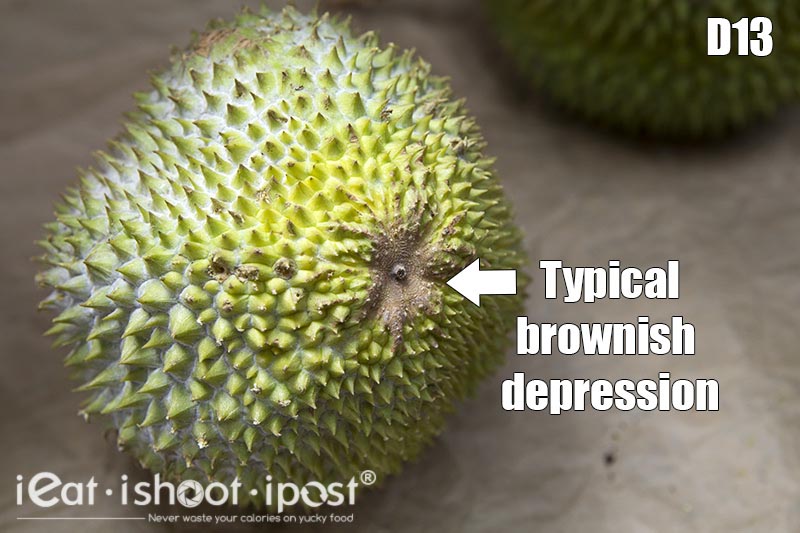 I have tasted several D13s season and it can range from one dimensional sweetness to a more complex bitter-sweetness. The D13s here belong to the latter category. The flesh is a very impressive deep orangey red hue with areas of grey denoting its bitterness. The flesh is slightly fibrous so you can really chew on it. It is an easy Durian to eat as it is not pastey and very light on the palate. A good Durian to start off with if you are doing a degustation. 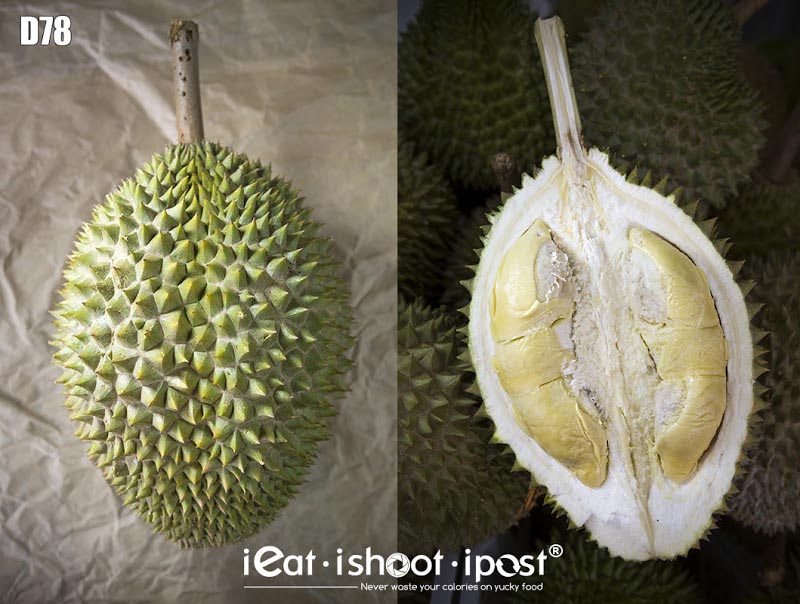 The D78 is another one of those Durians that you should start with at the beginning of a Durian Degustation as it quite mild.

The medium to large sized fruit is typically shaped like a rugby ball and it has thick thorns. The flesh is a pale yellow colour, not too sweet, dry and creamy with just a touch of bitterness. Not really distinctive if you ask me, but perhaps it is because I caught it at the tail end of the season.

The D88 is a medium sized fruit that is usally pear shaped. I like to think that it looks like a lady in her third trimester of pregnancy! The thorns are thick and is light green at the base, yellowish green in the middle and ending with a brownish tip.

The flesh of the D88 is always stunning. It has a very impressive, well endowed pastel chrome yellow flesh. It is not too sweet, dry and pastey and has a very distinct linear bitterness ie it just tastes like a straightforward bitterness that runs parallel with the sweetness rather than being mixed in together with it.

Mr Chia’s XO durians are excellent and if you like XO, this is the place to get it.

The fruit is usually small to medium sized and can range from round to pear shaped with thorns with have a dark green base which end in brownish tips. 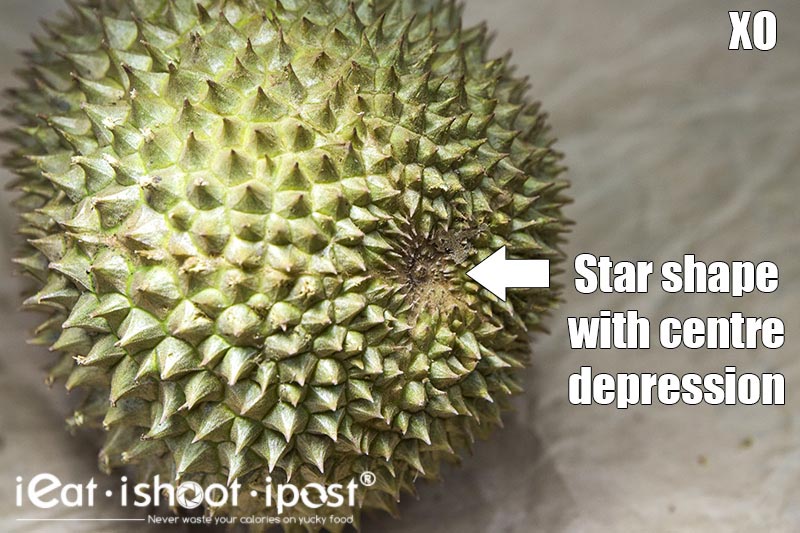 When fresh, the flesh of the XO is dry to touch, but very soft. The membrane breaks when you bite into it and like an egg yolk, the runny contents oozes into your mouth, filling it with a complex bitter-sweetness with a touch of brandy which I really enjoy.

This stall is great if you are looking for a good variety of Durians and in particular if you are looking for D13, XO and Ai Ching Guo. Mr and Mr Chia are really friendly and this is the kind of neighbourhood Durian shop where everyone seems to know each other. Being a neighbourhood stall, the prices are also very reasonable. Mr Chia has kept his prices at around $8 for most cultivars even as other sellers have already increased their prices as the season comes to a close.

3pm to 8pm during season