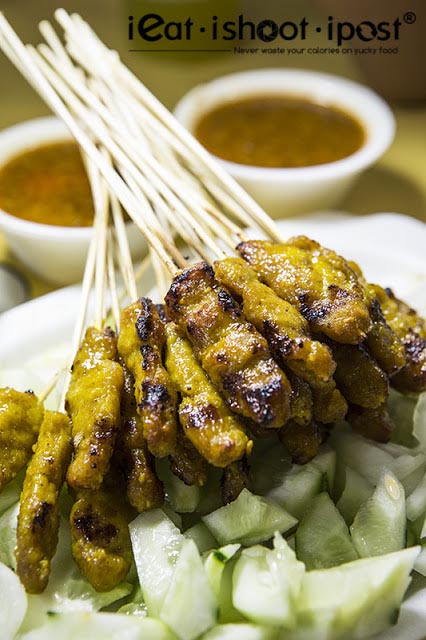 I think that there are very few food places that could elicit as many fond memories and nostalgia as the Satay Club at Esplanade. For those of us who can remember eating there, it was the epitomy of the Satay experience in Singapore. And in those days, when you ask around about which Satay stall you should eat at, you would inevitably hear a few voices say: “No. 1 Fatman Satay”!

That voice belonged to my sister-in-law, Eileen whom I can clearly remember extolling the fact that you can always ask for extra cucumber to lap up the peanut sauce for free and would always end up with a few extra servings of cucumber.

I think people must have been more honest in the past, ‘cos in those days, they would just give you a pile of Satay and count the number of empty sticks after you finish your meal! Not only that, we would often pay the hawker only after we finish our plate of, say, Char Kway Teow! Why and when did things start to change? Is it a reflection of the fact that we have lost that Kampung spirit over the years or has NEA stepped in to stop the practise of counting satay sticks because it was deemed unhygienic that the leftover sticks of satay would then be served to the next customer?

Fatman Satay is still alive and is probably Singapore’s oldest surviving Satay Stalls which can trace its history back to 1948. It is called Fatman Satay because the original man who started it was fat. Duh. OK, if you don’t like that theory, then perhaps you might want to believe Brian Richmond’s theory that in the past all Satay sellers were called “Pak Mun” meaning “Uncle” and somehow that became “Fatman” over the years. Actually, the 2nd theory seems more plausible since the 2nd generation Satay man (who is quite slim) tells me that his father wasn’t fat as well! (Anyone here remember the original Fatman?)

What sets Fatman Satay apart from the rest is the fact that they still use minced meat to make their satay. At the peak of its popularity, there were other copycats around who were also using mince. But nowadays, Fatman seems to be the only one around still doing it. The great thing about using minced chicken or beef is that your satay is always going to be tender and you will get a nice explosion of spices in your mouth because it has been mixed into the meat. However, in order to ensure that it is juicy, you need a bit of fat in it, just like a good hamburger. I think that they must have cut down on the amount of chicken skin they use for the satay nowadays in view of health concerns and so the satays were a tad dry. Otherwise the fragrance of the lemongrass and the spices is very distinct. The peanut sauce is very good and better than a lot of places but still falls short of my gold standard which is Satay Zul in Kuantan. That one is so addictive that a whole chinese soup bowl is not enough. I have yet to find a peanut sauce in Singaore like that! 4/5

Fatman Satay is an institution that has been around for over 60 years and has a staunchly loyal following There are two reasons to come eat here. Firstly, for the sake of nostalgia and secondly for its minced meat version of Satay. The sauce is commendable but the satay could be a bit more juicy.

Post Script
I went to Lau Pa Sat to look for fatman last weekend and to my consternation I found out that Fatman is not longer there! The satay at Old Airport Road might still be the same, but it was great to be able to eat satay on the road at Lau Pa Sat.